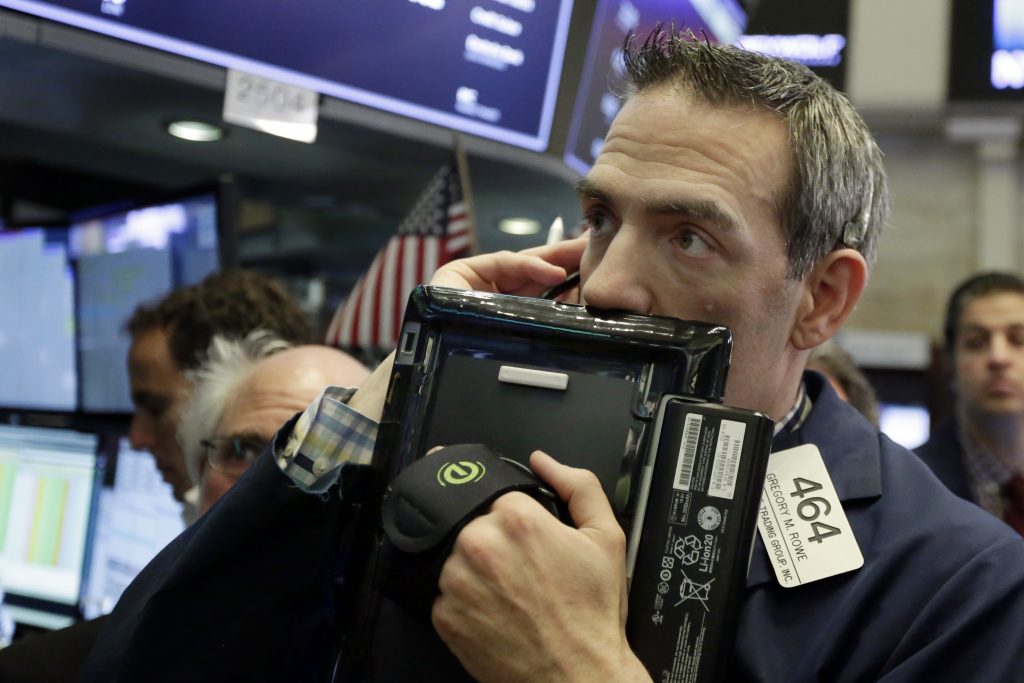 U.S. stocks are slipping Wednesday afternoon as chip-makers like Texas Instruments and other technology companies fall. Investors remained focused on global trade issues: the dollar is weaker after Treasury Secretary Steven Mnuchin said the declining dollar is good for U.S. exporters, suggesting he isn’t likely to try to stop the currency’s recent slide. Airlines are falling sharply after United Continental said it plans to ramp up passenger capacity.

A day after the Trump administration placed tariffs on some imported solar products and washing machines, investors focused on the World Economic Forum in Davos, Switzerland, and on comments by officials including Mnuchin. Stocks traded in a wide range: in the morning the Dow rose as much as 181 points and later fell as much as 103 points.

Citi Investment Research analyst Christopher Danely said business conditions for chip-makers are weakening after a run of strong results that took many of the companies’ stocks to record highs.

DOLLAR DOWN: Mnuchin said he’s not concerned that the dollar has weakened because it’s making U.S. goods less expensive in other markets. That tends to help companies that sell a lot of products overseas, including technology and industrial companies. The ICE US dollar index fell almost 10 percent in 2017 and is down 3 percent so far this year.

The declining dollar hurt shares of smaller companies. Those companies do most of their business in the U.S., and a weaker dollar hurts their profits because oil and imported components become more expensive.

“Small caps are much more domestically focused than large caps are, but you’re still buying from foreign companies,” said Mark Hackett, chief of investment research at Nationwide Investment Management. However he said smaller U.S. companies will report faster profit growth this year than larger ones, as the benefit those companies will get from the new corporate tax cut will outweigh the pain from the weaker dollar.

STUCK ON THE TARMAC: United Continental plunged after it said it’s planning more aggressive growth over the next few years. It’s aiming to increase its passenger-carrying capacity by 4 to 6 percent a year through 2020. United has done better recently at handling competition with lower-cost carriers, but investors worried that more flights will mean reduced prices and hurt its profits. The stock plunged $8.53, or 10.9 percent, to $69.44.

SPIN CYCLE: Appliance maker Whirlpool, which gets most of its revenue overseas, continued to rally as the weaker dollar could boost its sales and aid its earnings. The stock rose 3.5 percent Tuesday after the tariffs were announced, and on Wednesday it rose $6.38, or 3.7 percent, to $178.36.

GE MEETS THE SEC: General Electric had a solid fourth quarter, but the stock dropped after it said it’s being investigated by federal regulators after disclosing a $15 billion charge to cover miscalculations by its North American Life & Health insurance business. The stock lost 44 cents, or 2.6 percent, to $16.45.