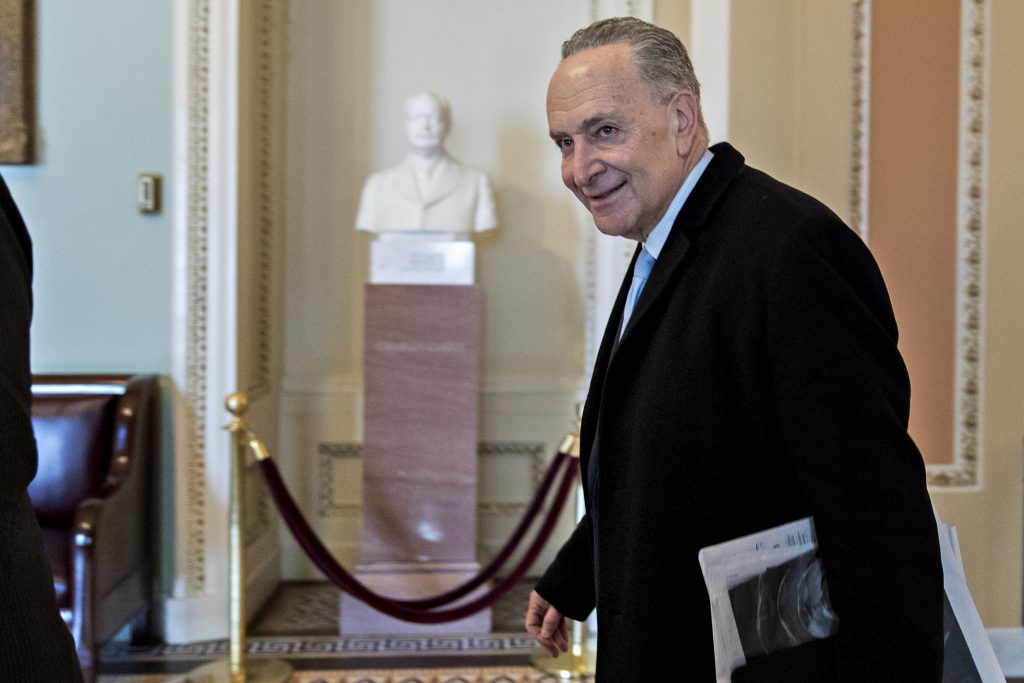 Hopes for a fresh start on immigration slammed into political reality Tuesday as the Senate’s top Democrat said he had rescinded an offer to President Donald Trump on a border wall and the White House called an emerging bipartisan compromise “dead on arrival.”

Senate Minority Leader Charles Schumer, D-N.Y., said he had withdrawn an offer to Trump of $25 billion for new border security measures in exchange for permanent legal protections for some undocumented immigrants brought to the country as children.

“We’re going to have to start on a new basis, and the wall offer’s off the table,” Schumer told reporters, explaining that it had only applied to a deal that was never realized.

News of his decision came as Schumer is facing a backlash from liberals that he had been too accommodating to the president.

In a message on Twitter, the president said: “Cryin’ Chuck Schumer fully understands, especially after his humiliating defeat, that if there is no Wall, there is no DACA. We must have safety and security, together with a strong Military, for our great people!”

Trump repeatedly promised during the 2016 campaign that he would build a border wall that Mexico would finance. Democrats and some Republicans have balked at the administration’s request of $18 billion to pay for it.

Schumer made the proposal in a major concession to Trump on Friday in a private meeting at the White House, then pulled it back Sunday night, according to a person familiar with the meeting. Schumer acknowledged Tuesday that the offer was no longer operable.

At the White House, the administration said Tuesday that it expects Congress to move beyond a bipartisan deal to protect the undocumented immigrants that the president rejected during a vulgar exchange with lawmakers nearly two weeks ago.

“It’s totally unacceptable to the president and should be declared dead on arrival,” press secretary Sarah Huckabee Sanders said during a White House news briefing of a plan being crafted by Sens. Lindsey Graham, R-S.C., and Richard Durbin, D-Ill.

She said their plan, not yet written into formal legislation, would not sufficiently secure the border and would increase legal family-based immigration, a practice that conservatives are hoping to curb to dissuade migrants from entering the country.

The partisan sniping came only a day after lawmakers struck a bipartisan deal to end the three-day government shutdown with the promise to move forward on immigration. The disputes underscored the difficulty all sides face in trying to compromise on the issue while answering to party political bases that are far apart on immigration.

Schumer’s decision to withdraw the border wall offer drew rebukes from Republicans, who accused him and Democrats of not taking ongoing talks seriously. And the move once again exposed divisions among Democratic lawmakers, who support permanent legal protections for the undocumented immigrants but cannot agree on how to compromise with Republicans on a deal.

Sen. John Cornyn, R-Texas, who will play a central role in the next round of immigration talks, called Schumer’s decision “a step backward.”

Schumer’s decision to engage Trump on border wall funding even exposed fissures in the ranks of the Congressional Hispanic Caucus, a key bloc that has pushed fellow Democrats most aggressively to secure permanent legal status for immigrants protected by the Deferred Action for Childhood Arrivals program, which is set to expire March 5.

During the Friday meeting, Trump and Schumer agreed that most of the $25 billion would be appropriated at the start, with more doled out in the future, according to a person familiar with the meeting who spoke on the condition of anonymity to talk frankly about the exchange.

Aides to Schumer would not comment on the exact price tag.

Over the weekend, Schumer described the meeting several times in public remarks, saying that Trump “picked a number for the wall, and I accepted it.” At other points Schumer said he “reluctantly” agreed to discuss constructing a wall – but never revealed the sum.

Negotiators face a Feb. 8 deadline, leaving less than three weeks to sort out some of the most emotionally charged issues. Some moderate Republicans involved in the talks expressed optimism that a deal could be reached.