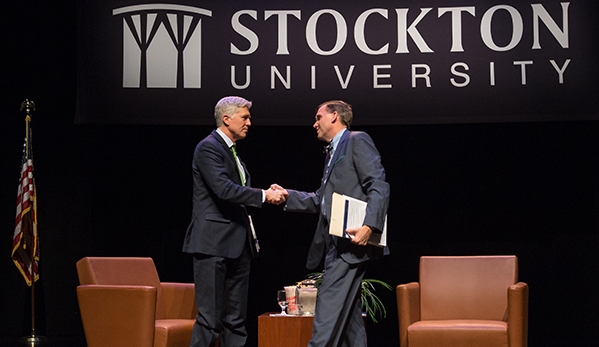 A return to civics and civility is crucial to the continued flourishing of the American experiment, Supreme Court Associate Justice Neil Gorsuch told an audience of college students on Tuesday before delving into his judicial philosophy of originalism and the rituals required of new justices.

Gorsuch also drew chuckles with his impression of former Justice Byron White, the college-football-star-turned-judge for whom he clerked.

A return to civility is essential for the republic to remain stable, Gorsuch said at Stockton University in southern New Jersey. His remarks lasted about 20 minutes, followed by a 40-minute question-and-answer session with pre-submitted questions.

“To preserve our civil liberties, we have to work on being civil with one another,” he said. When others act uncivilly, “you will be tempted to respond in kind; it’s easy to fall into the trap” he added. “But it is possible to disagree without being disagreeable. At the end of the day, your character is the most important thing in your possession.”

On his judicial philosophy of originalism, the strict adherence to the intent of the framers of the Constitution, Gorsuch said the role of judges is to “apply the law as it is, not as they wish it were.”

“When I’m interpreting the Constitution, I’m looking at sources that are external to myself,” he said. “I look to what the Founders understood, what the original public meaning of that document was, and I take great care to pay attention to the words on the page.”

He added that a good way to measure a country’s commitment to freedom and the rule of law is how often its government loses in court, noting that he and his colleagues “have no problem ruling against the government.”

The speech was sponsored by the university’s William J. Hughes Center for Public Policy, named after the former New Jersey congressman and U.S. ambassador. Gorsuch has been friends with Hughes’ son since their prep school days.

Gorsuch jokingly called the Supreme Court “like high school” for its practice of ringing a buzzer five minutes before a conference or a hearing is to begin. The newest justice is assigned to the cafeteria committee, he said, and his first act was to weigh in on a problem with the meatball subs.

White had a tremendous influence on him, Gorsuch said, and referred to him as “the smartest man I ever knew.” Asked why he pursued law, Gorsuch showed a self-deprecating side.

“Because I was good at absolutely nothing else,” he said to laughs. “It was either that or giving it up and being a ski bum or a fly-fishing guide. I’m sure some people wish I had.”