Technology Apple Wants You to Put Your Medical Records on the iPhone
Health, Science & Technology 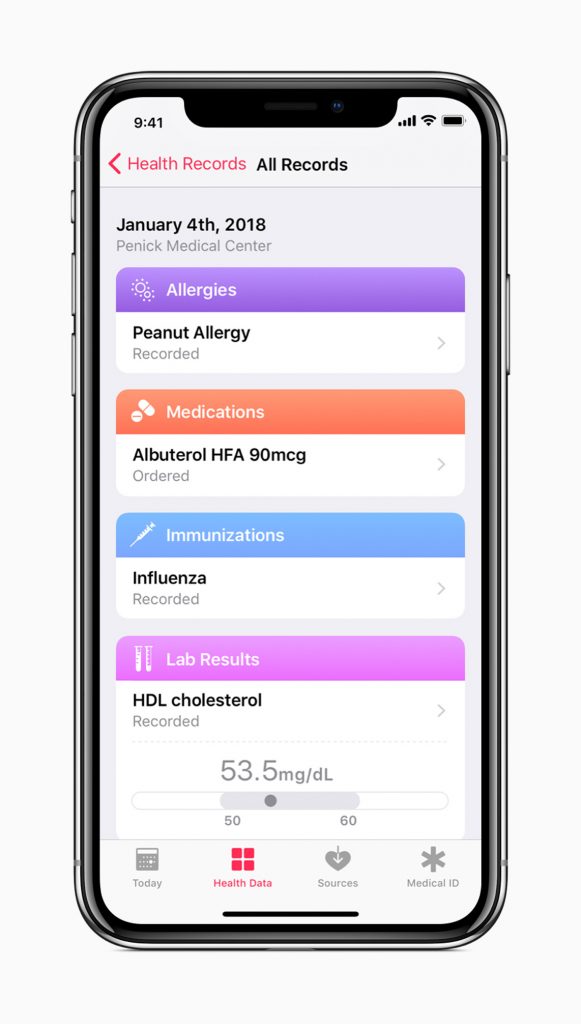 Imagine this: You’re on vacation and slip and fall at the pool. You head to the hospital, where doctors ask if you’re taking any medications or have had any recent medical procedures. Instead of trying to recall the names of all your pills or your medical history while in pain, you easily pull up your medical records on your phone.

Apple, the tech giant that has been hungrily eyeing the health-care sector for years, announced Wednesday it would soon allow people in certain hospital systems to tether their medical records to their iPhones, getting easy access to seven categories of information, including immunizations, lab results and allergies.

The medical records capability will roll out through a beta available to the general public in the coming months. It’s an update of a less sophisticated medical records function in Apple’s Health app. Previously, people could download specific medical records and add them to the app, but the new version will aggregate information and update it as a person’s medical record evolves.

The announcement comes about a decade after Google launched a similar effort — and then pulled the plug, noting in its blog that its offering was used by a narrow bandwidth of people — tech-savvy patients and caregivers and fitness enthusiasts.

“But we haven’t found a way to translate that limited usage into widespread adoption in the daily health routines of millions of people,” Google leadership wrote on its blog in 2012.

Microsoft has a similar product, HealthVault.

“If you rewind the clock, when they did their efforts in technology-speak, that could be considered a lifetime ago,” said Darren Dworkin, chief information officer of Cedars-Sinai in Los Angeles, one of the hospitals working with Apple to make the records available to patients. “We also just interact with technology in a different way all these years later. Every one of us has a phone in our pocket or not too far from our pocket; it seems so logical, and frankly empowering, to have health information at our fingertips.”

Apple could theoretically bring much-needed ease of use to medical information, by presenting the medical record in a more easily understandable format than existing clunky web portals. Dworkin emphasized that the iPhone is a trusted platform, which could ease concerns about patient privacy.

For years, patients have been able to log in to access their health records. Some health systems offer apps where people can access lab results, message their doctors or make appointments. The new Apple offering will have the advantage of being able to integrate information from multiple providers, better reflecting how people seek and receive care in the real world, where a person’s primary care doctor and specialist may not be at the same hospital.

“We all are very focused on trying to improve the patient experience, trying to make sure the patient feels empowered and able to manage and own their own health information. It should be like checking my email, like making a purchase online,” said Stephanie Reel, chief information officer of Johns Hopkins Medicine, one of the hospital systems.

Apple has worked with three vendors of electronic medical records for the first wave of its apps: Epic, Cerner and AthenaHealth. More hospitals and other electronic health vendors will be able to join in the coming months.

The opportunity is big, but compatibility issues and technological challenges are real, said Dan Mendelson, president of Avalere Health, a consulting company.

“What they’re describing is exciting and everybody wants it. But for those of us who have been doing this for awhile, we’ve seen many capable companies hit the stiff resistance of the incompatability of medical records,” Mendelson said. “The lack of standardization in the market makes it very difficult to jump in and put out consumer products that are viable.”