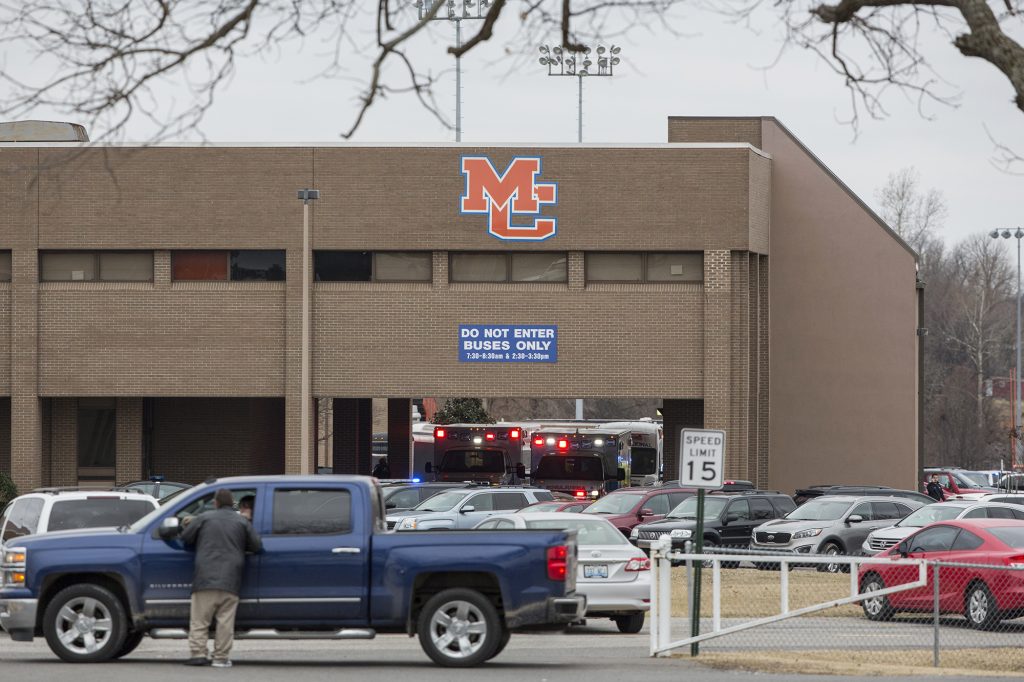 A 15-year-old student opened fire with a handgun inside a rural Kentucky high school Tuesday morning, killing two of his classmates, injuring 19 and sending hundreds fleeing for safety.

Police were seen leading a teenager away in handcuffs and said the suspect will be charged with murder. It was the nation’s first fatal school shooting of 2018.

Students ran for their lives out of Marshall County High School, jumping into cars and running down a highway, some not stopping until they reached a McDonald’s restaurant more than a mile away.

Two 15-year-olds were killed. A girl died at the scene, and a boy died later at a hospital, the governor said, adding that all of the victims are believed to be students.

The shooter will be charged with murder and attempted murder, Bevin said. Police did not release his identity, nor did they describe a motive.

Kentucky State Police have no reason to suspect anyone else, detective Jody Cash told the Murray Ledger & Times.

Tuesday’s shooting happened as students gathered in a common area just before classes began. Sixteen-year-old Lexie Waymon said she and a friend were talking about the next basketball game when gunshots pierced the air.

“I blacked out. I couldn’t move. I got up and I tried to run, but I fell. I heard someone hit the ground. It was so close to me,” Waymon said. “I just heard it and then I just, everything was black for a good minute. Like, I could not see anything. I just froze and did not know what to do. Then I got up and I ran.”

It was chaotic outside the school as parents and students rushed around trying to find each other, said Dusty Kornbacher, who owns a nearby floral shop. “All the parking lots were full with parents and kids hugging each other and crying and nobody really knowing what was going on,” he said.

Garland said his son, a 16-year-old sophomore, jumped into someone’s car and sped away before joining others inside his business.

“Everyone is just scared. Just terrified for their kids,” Garland said. “We’re a small town, and we know a lot of the kids.”

Meanwhile, in the small North Texas town of Italy, a 15-year-old girl was recovering Tuesday after police said she was shot by a 16-year-old classmate in her high school cafeteria on Monday, sending dozens of students scrambling for safety.