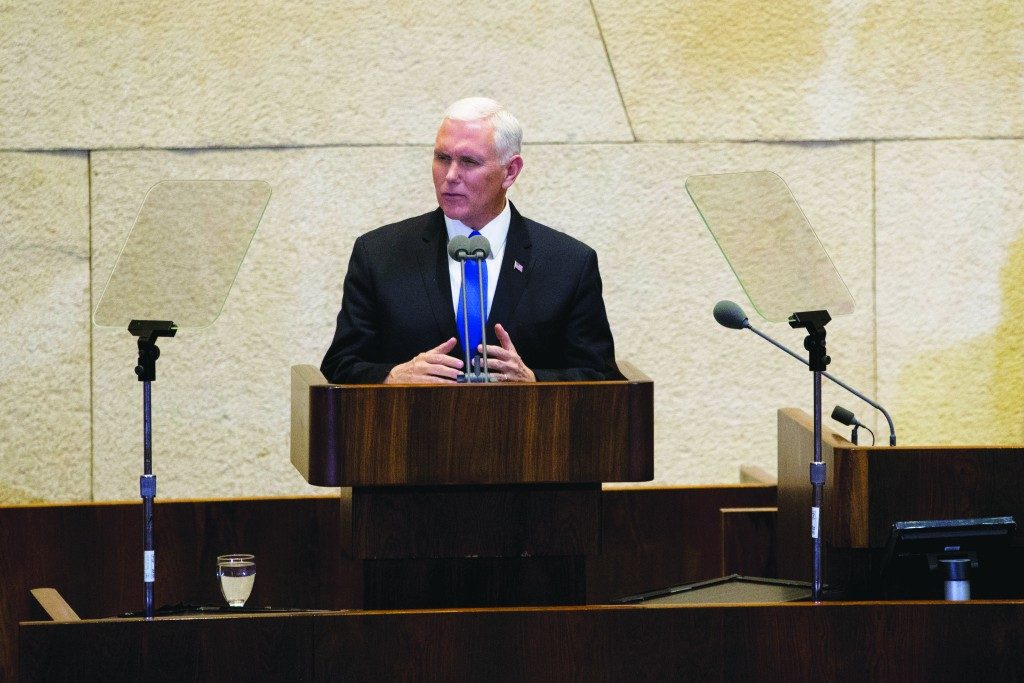 It wasn’t a speech, it was poetry. Vice President Mike Pence’s address to the Knesset Monday was an expression of love for the Jewish people, of commitment to the security of Israel and of determination to advance a peace process that is based on truth and reality, not falsehood and fantasy.

Mr. Pence, the first U.S. vice president to address the Knesset, spoke from the heart. He hailed President Donald Trump as a “leader who has done more to bring our two great countries closer than any president in the past 70 years.” And he brought the welcome news that the president had instructed the State Department to immediately begin preparations to move the U.S. embassy from Tel Aviv to Yerushalayim, adding that it will open in the capital “before the end of next year.”

Even more importantly, he was emphatic that the United States would not allow Iran to gain nuclear weapons or to continue to sponsor terrorism. “Two and a half years ago, the previous administration in America signed a deal with Iran that merely delays the day when that regime can acquire a nuclear weapon,” he said, to a standing ovation — one of many. “The Iran nuclear deal is a disaster, and the United States of America will no longer certify this ill-conceived agreement.”

Such a message was music to Israel’s ears, especially after eight years of stiff-arming by the Obama administration, which set out to play down ties with Israel in a misguided attempt to appease the Arab world. Israel’s prime minister was left to cool his heels in the Roosevelt Room while the president joined his family in the residential wing for dinner, was blamed for the failed peace talks (even though he’d agreed to an unprecedented building freeze and the release of terrorists with blood on their hands) and ignored when it came to the nuclear deal signed with Iran.

For the previous administration, Israel was an ally. For President Trump and Vice President Pence, Israel is a mission, a value, a moral imperative. Citing the words of America’s second president, John Adams, the vice president said that the Jews “have done more to civilize man than any other nation.”

When it comes to the peace process, Mr. Pence correctly pointed out that there was nothing about President Trump’s recognition of Yerushalayim as the capital of Israel that ruled out compromise. “He made it clear that we’re not taking a position on any final status issues, including the specific boundaries of the Israeli sovereignty in Jerusalem or the resolution of contested borders.”

Most significantly, his words reflected a paradigm change whereby Israel is no longer assumed to be the recalcitrant party whenever peace talks run aground, and the world’s superpower refuses to pay homage to Palestinian lies in a contrived attempt to keep the process alive.

“By finally recognizing Jerusalem as Israel’s capital, the United States has chosen fact over fiction,” said the vice president. “And fact is the only true foundation for a just and lasting peace.”

While America is trying to wean the Palestinians off of falsehood, and off of the notion that it doesn’t have to compromise because the world will force Israel to give in on everything, the European Union was this week hosting PA chairman Mahmoud Abbas and assuring him that what was will continue to be, in effect dooming any prospects of reviving peace talks.

When the Trump administration came to power, it asked both sides to make gestures for peace. Israel was asked to cool down building in Yehudah and Shomron and approve economic projects that would improve the lot of the Palestinians, which it did. The Palestinians were asked to do one thing: Stop paying salaries to terrorist murderers of Jews.

This should have been considered the minimum demand of a peace partner, but even this was too much for the Palestinians, raising obvious questions about its claim to be a peace partner.

The Trump administration has, in the words of PA foreign affairs chief Riyad Al-Maliki, changed the “rules of the game.” It will no longer pretend that Yerushalayim isn’t the capital of Israel and it will no longer buy into the premise that the Palestinians are incapable of compromise on any issue — not even when it comes to recognizing Israel as a Jewish state.

And it will no longer be a cash cow for the Palestinians regardless of how they behave or how they treat the United States or its leaders. Abbas cannot place a traditional Arab curse on President Trump, wishing that “his house and descendants be destroyed” and expect no consequences.

In one of the most moving moments of the vice president’s speech, he referred to Israel’s upcoming 70th anniversary and said, in Hebrew, the blessing of “Shehecheyanu v’kiyemanu, v’higiyanu lazman hazeh.”

The blessing reflected not only his feelings, but those of Jews in Israel and around the world who never thought they’d see the day that a U.S. vice president stood before the Knesset and expressed such heartfelt, eloquent concern for the welfare of the Jewish people and such admiration for its contribution to mankind.