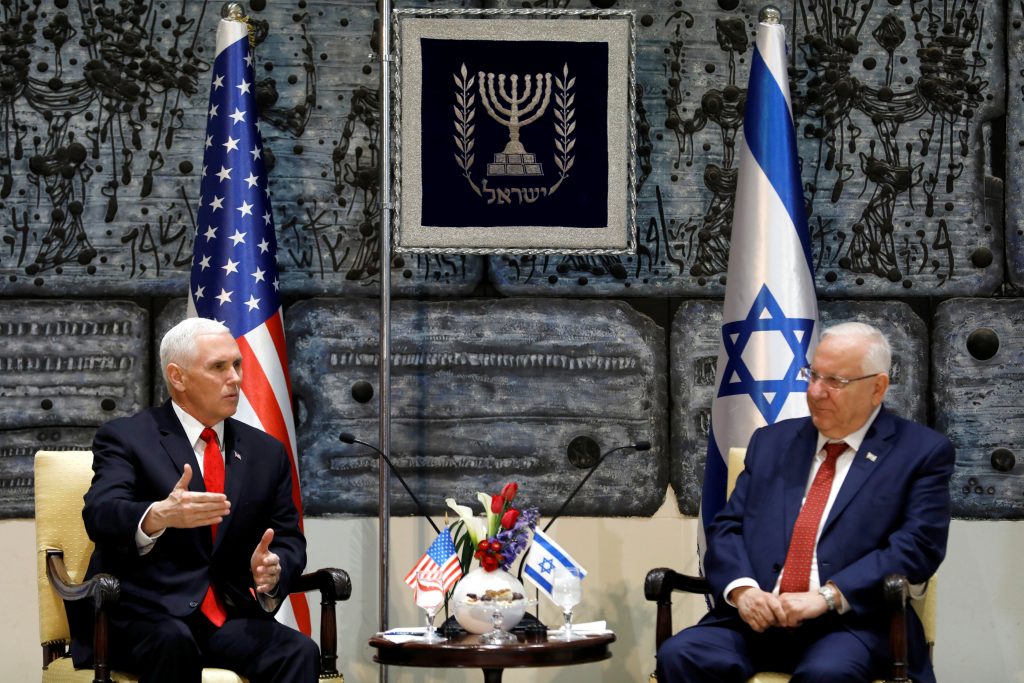 U.S. Vice President Mike Pence said on Tuesday that the timing of a long-awaited U.S. Middle East peace initiative depended on the return of Palestinians to negotiations.

President Donald Trump’s advisers have been working on the outlines of a plan for some time. But Palestinians ruled out Washington as a peace broker after the U.S. president’s Dec. 6 recognition of Yerushalayim as Israel’s capital.

“The White House has been working with our partners in the region to see if we can develop a framework for peace,” V.P. Pence told Reuters in an interview in Yerushalayim on the last leg of his three-day Middle East trip. “It all just depends now on when the Palestinians are going to come back to the table.”

Trump’s Jerusalem move angered the Palestinians, sparked protests in the Middle East and raised concern among Western countries that it could further destabilize the region.

A White House official told reporters his hope was that the plan would be unveiled in 2018, but he declined to commit to a timeline, saying both sides had to be ready for it.

V.P. Pence said in the interview that he and the president believed the decision, under which the United States also plans to move its embassy in Israel from Tel Aviv to Yerushalayim would improve peacemaking prospects.

The vice president discussed the issue during talks with Egypt’s President Abdel Fattah al-Sisi on Saturday and Jordan’s King Abdullah on Sunday. He said the two leaders had agreed to convey to the Palestinians that the United States was eager to resume peace talks.

“We want them [the Palestinians] to know the door is open. We understand they’re unhappy with that decision but the president wanted me to convey our willingness and desire to be a part of the peace process going forward,” he said.

Asked if the Egyptians and Jordanians had agreed to pressure the Palestinians to return to talks, Pence said: “I wouldn’t characterize it as that.”

Vice President Pence said that the U.S. State Department would spell out details in the coming weeks about a plan to move the U.S. embassy to Jerusalem by the end of 2019.

Israeli media have speculated that a 2019 embassy move could help Israel Prime Minister Benjamin Netanyahu win reelection in a vote scheduled for November of that year.

Vice President Pence said he admired Netanyahu’s leadership and appreciated his friendship. Asked if he hoped for the prime minister’s re-election, he said: “I’m a strong supporter of Benjamin Netanyahu, but I don’t get a vote here.”

Asked if he thought the United States would succeed in getting that kind of agreement with its European allies, V.P. Pence said: “We’ll see.”

President Trump said earlier this month the United States would withdraw from the agreement unless its flaws were fixed.