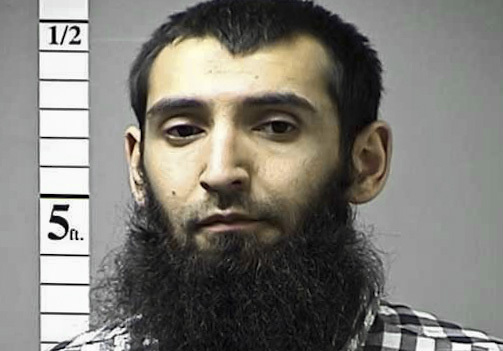 An Islamist charged with killing eight people on a Manhattan bike path last year is willing to plead guilty if he’ll be spared the death penalty, his lawyers said Wednesday.

“In short, a decision by the government not to seek the death penalty would bring immediate closure to the case without the need for the public and victims to repeatedly relive the terrible events of Oct. 31, 2017,” U.S. District Judge Vernon S. Broderick was told in a letter signed by David Patton, executive director of the Federal Defenders of New York.

If the government seeks death, the lawyers said a trial should occur no earlier than September 2019 because of the large volume of evidence. They also need to build a defense with information to be gathered halfway by many of the victims and families located throughout the United States and overseas, including in Argentina, Belgium and Germany.

Authorities say Islamic State propaganda was found on cellphones belonging to Saipov, who moved to the United States legally in 2010 from Uzbekistan. He lived in Ohio and Florida and worked as a commercial truck driver before he recently moved to New Jersey with his wife and children.

The government said there is “a strong desire for closure” among those harmed by the attacks in the U.S. and abroad.

“It is deeply traumatic for these bereaved, seriously injured, or otherwise traumatized victims and their families to endure reliving Saipov’s attack by recounting the details, and victims have already expressed to the government concern about delays in this process,” prosecutors wrote.