Israel VP Pence: Embassy to Move by End of 2019
Israel 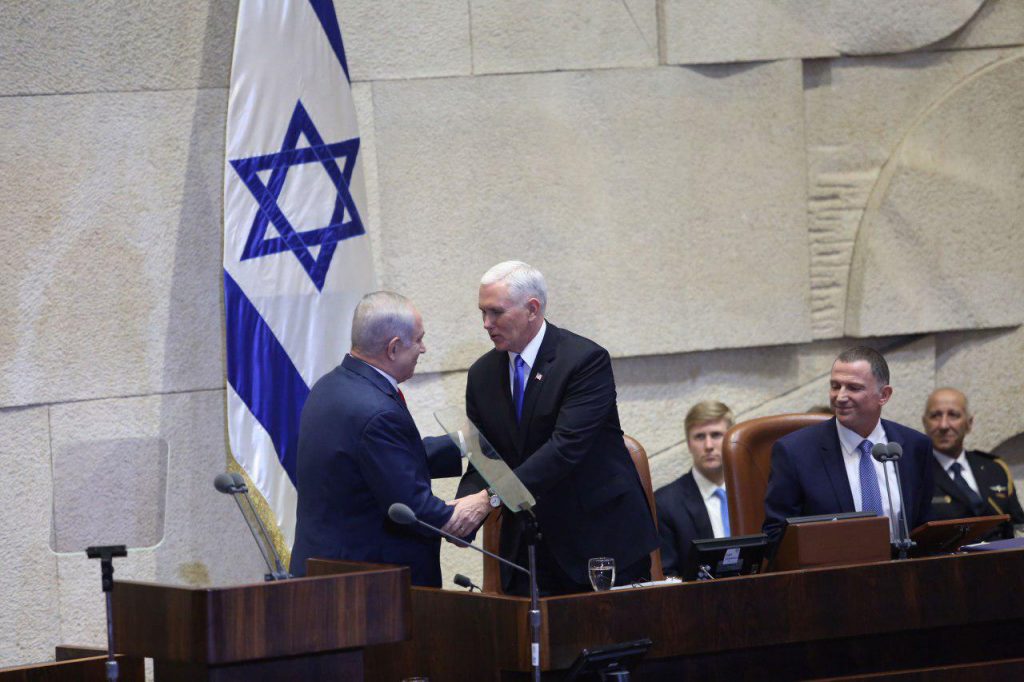 YERUSHALAYIM – In an emotional address that was heralded by MKs, ministers and other political officials who gathered to hear him speak, U.S. Vice President Mike Pence re-affirmed the U.S. commitment to Israel, telling MKs he was “proud” to be speaking to them in Yerushalayim, the capital of Israel. “I am here to convey a simple message from the heart of the American people: The American people stand with Israel,” Pence said, adding that the U.S. and Israel shared many values, and that both countries “believe in good over evil, in liberty over tyranny.”

Pence’s comments were preceded by speeches by Knesset Speaker Yuli Edelstein, Prime Minister Binyamin Netanyahu, and opposition leader MK Yitzchak Herzog (Zionist Camp), all three of whom expressed thanks and appreciation to Pence and U.S. President Donald Trump for recognizing Yerushalayim as Israel’s capital. Netanyahu spoke in Hebrew, switching to English to tell Pence that the U.S. declaration will be long remembered by Israelis as a key moment in their history. “Jerusalem, Utah. Jerusalem, Vermont. Jerusalem, Michigan. And they’re all inspired by this shining city on the hill, Jerusalem,” Netanyahu said, addressing Pence. “Mr. Vice President, we have a common past, we have a common future, we have a shared destiny.” Herzog, in his speech, praised Pence as “a friend of the Jewish people and a friend of Israel,” adding that Trump should be praised for his declaration.

At the opening of his remarks, Pence made the brachah of Shehecheyanu, telling MKs that the U.S. had “righted a 70-year wrong by recognizing Jerusalem as Israel’s capital.” Preparations for the official embassy move were to begin this year, he said, with the actual move to take place no later than the end of 2019. While acknowledging the importance of the U.S. declaration, Pence said that it was important to ensure freedom of religion and access to holy places for people of all faiths. In addition, the U.S. declaration did not preclude negotiations on the final-status borders of either Israel or Yerushalayim, which he said must be determined in negotiations between Israel and the Palestinians. The U.S. supports the two-state plan, and peace “will require compromises.” But the U.S. “will never compromise the safety and security of Israel,” he said.

Pence was also optimistic over the possibility that those talks could result in a peace plan. “We know Israelis want peace, and we know that Israelis need no lectures on the price of war. The people of Israel know the terrible price all too well. Your prime [minister] knows that price; he himself was nearly killed in battle,” Pence said, adding that those “who know the price of war know best what the blessings of peace can bring.” The U.S. was committed to a better future for all peoples of the region. “We will pray for the peace of Jerusalem,” he said. “We will work and strive for that brighter future where everyone who calls this ancient land their home shall sit under their vine and fig tree, and none shall make them afraid,” adding that the U.S. “strongly urged” the Palestinians to return to peace talks.

Pence also took the opportunity to discuss the international deal with Iran to limit that country’s nuclear program. The deal, he said, was a bad one, a “disaster,” in fact, and the U.S. will no longer re-certify it. “Unless the Iran nuclear deal is fixed, President Trump has said the United States will withdraw from the Iran nuclear deal immediately,” Pence said, adding that the U.S. would not allow Iran to develop nuclear weapons, and that it would “no longer tolerate Iran’s support for terrorism,” a reference to Tehran’s activities in Syria and Lebanon.

Pence’s speech was wildly applauded by MKs, except for Arab MKs – who pulled out signs reading “Jerusalem is the capital of Palestine.” The Arab MKs were removed from the Knesset. Speaking to reporters outside the plenum, MK Jamal Zahalka said that “we unfurled those signs to protest against Trump. We want an agreement, but we have no respect for the vice president.” Pence, said Zahalka, “was messianic in his views. We wanted to show our disrespect, on purpose.” Commenting on the incident, Defense Minister Avigdor Liberman said that “once again, United Arab List MKs have proven that they are the representatives of the terror groups. Their shameful behavior has once again shown that they have no loyalty to the state and its symbols. Only if Israeli Arabs allow other voices to ring forth will there be a chance for peace.”