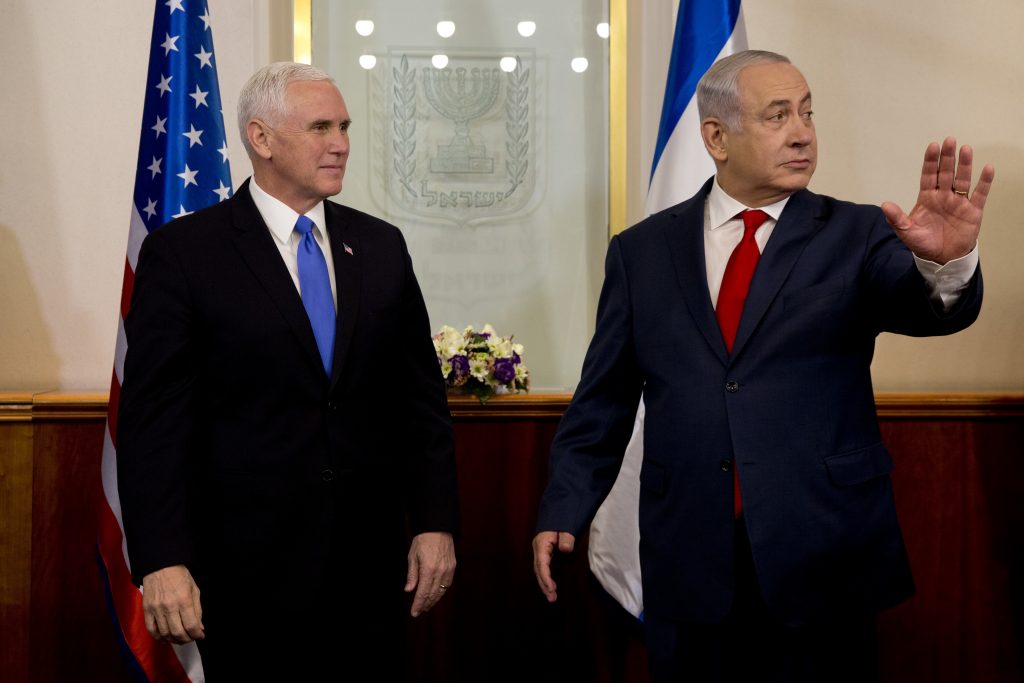 Vice President Mike Pence says the “door’s open” for the Palestinians to return to the negotiating table with Israel on a peace agreement.

VP Pence spoke to The Associated Press in an interview following his address to the Knesset on Monday. He says the U.S. is hopeful that the Palestinian Authority “will be encouraged to return to the table.”

Palestinian leaders have assailed the U.S. for its decision to recognize Yerushalayim as the capital of Israel, saying it is no longer impartial. They have rejected the U.S. role in future peace talks.

VP Pence says President Donald Trump made clear in December that the U.S. would respect “the status quo” with regard to holy sites and that boundaries in the Holy Land would be subject to negotiations.

The Palestinians have issued an angry reaction to Vice President Mike Pence’s speech to the Israeli parliament, saying it was a “gift to extremists.”

Saeb Erekat, the chief Palestinian negotiator, said VP Pence’s speech on Monday “has proven that the U.S. administration is part of the problem rather than the solution.”

Unfazed by the Palestinian reaction, VP Pence said that “the best days for Israel and the United States are yet to come.”

At a joint press conference after the Knesset speech, Netanyahu let loose with a scathing comment on European conduct visa vis Iran:

“I want to salute both President Trump and you, Mr. Vice President, for standing with the people of Iran, when so many in Europe and elsewhere, were shamefully silent,” Netanyahu said.

“Some — and this is hard to believe — some actually hosted the regime’s mouthpieces, while its goons were throwing thousands of Iranian protesters into prison,” he said, according to The Times of Israel.

The reference was apparently referring to the E.U. hosting Iranian Foreign Minister Javad Zarif in Brussels recently to discuss ways to preserve the nuclear deal, while the U.S. and Israel have been seeking a revision or cancellation.

“I share the belief that Iran’s radical regime will ultimately fall, and one day Iran’s people will win the freedom they so justly deserve,” the prime minister continued, shortly before departing for a private dinner with the Pences. “And when that day comes, they will remember those who stood with them, and those who stood with their oppressors. You’re on the right side of history, and Iran’s people will “thank Washington when they are free,” he said.

PM Netanyahu pledged that Israel will “unequivocally” support the president’s decision to walk away from a bad deal.

“Fully fix it or fully nix it,” he said.