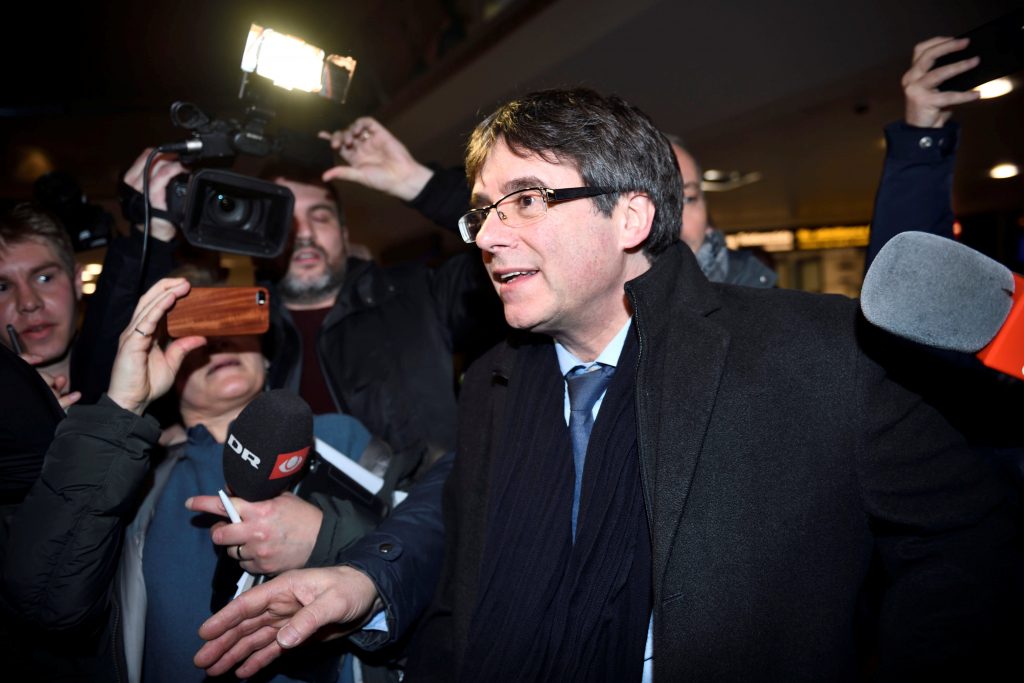 Spain’s prosecutors Monday asked the country’s Supreme Court to issue a European arrest and extradition order against Catalonia’s fugitive former leader after he arrived in Denmark.

Charles Puigdemont flew to Copenhagen from Belgium, where he has been since fleeing a Spanish investigation after the Catalan parliament’s secession declaration on Oct. 27. He is due to attend a university debate in Copenhagen later Monday.

He was immediately surrounded by media, but he made no comment before he got into a car that drove him away to an undisclosed location.

His trip also came as Catalonia’s parliamentary speaker proposed him as a candidate to form a government despite his status as a fugitive.
It remains to be seen whether Spanish Judge Pablo Llarena will issue the European warrant and ask Danish authorities to arrest him.

Spanish Foreign Minister Alfonso Dastis said the matter was for judges to decide. “Mr. Puigdemont is subject to a process in Spain. Outside, for the moment, his movements are free within the European Union, but we’ll see,” Dastis said in Brussels.

The push for independence by the Catalan government, while Puigdemont was regional president, triggered Spain’s most serious political crisis in decades. Spain ousted Puigdemont’s Cabinet, dissolved the regional parliament and called the December regional elections as part of special powers invoked following the independence declaration.

He and his 13 former Cabinet members face possible charges of rebellion, sedition and embezzlement, which carry jail sentences of up to 30 years under Spanish law.

Despite Puigdemont’s legal situation, Catalan parliamentary speaker Roger Torrent said Monday that the former president was the only candidate with enough backing to attempt a new government following the regional election last month.

Puigdemont is slated to take part in a debate at the University of Copenhagen on Monday. On Tuesday, he has been invited to the Danish Parliament by a Faeroese lawmaker, although leading members of the government and opposition have declined to meet with him.