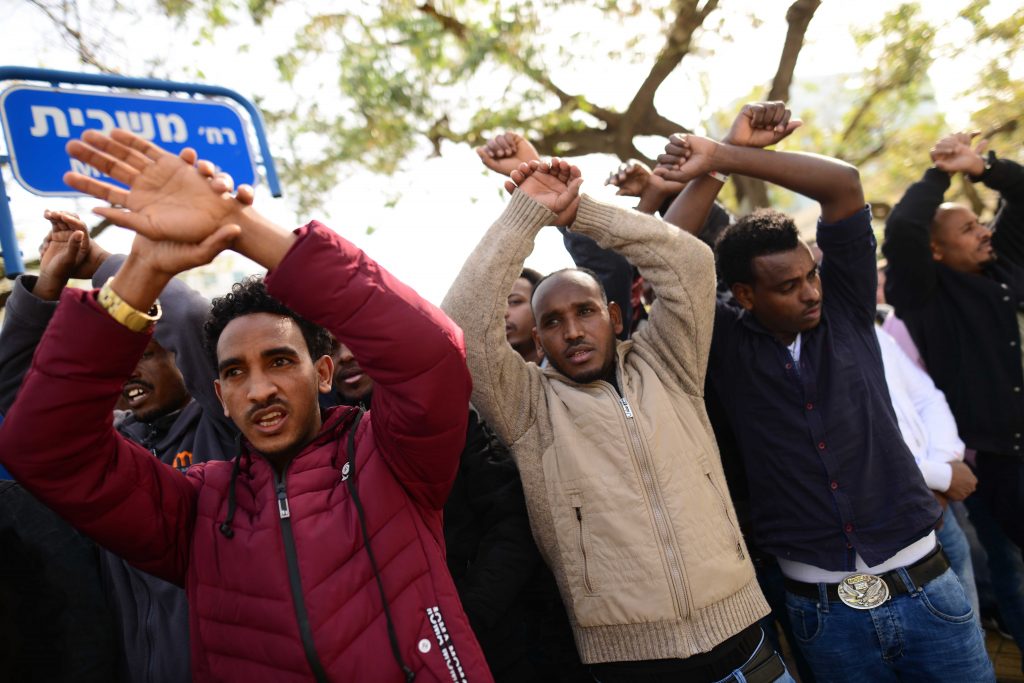 A campaign to pressure Israel into backing down from a policy of deportation of illegal migrants began to take shape on Monday, with street demonstrations, petitions and an airline pilots protest.

Outside the Rwandan embassy in Herzilya on Monday, about 1,000 Eritrean asylum seekers protested the government’s plans to send them to a third country, either Rwanda or Uganda, The Times of Israel reported.

Chanting “We are human beings!” and “Remember your history!” they are seeking rollback of an amendment to the so-called Infiltrator’s Law, which will see closure of the Holot detention facility and deportations of Eritrean and Sudanese migrants starting in March.

Prime Minister Binyamin Netanyahu has been adament about solving the migrant problem, and on Sunday reiterated the government’s position that the overwhelming majority of the tens of thousands of Africans in Israel illegally are not legitimate refugees or asylum seekers, but economic migrants.

“They aren’t refugees,” Netanyahu told the weekly cabinet meeting. “Or at least most of them aren’t. Most of them are looking for jobs,” he asserted, and rejected accusations that his policy is unjust or lacking compassion.

More than 400 artists from the entertainment world have signed a public letter calling on Netanyahu to dismantle the deportation scheme and allow them to stay in Israel.

“For several years there have been asylum seekers from Eritrea and Sudan living here. They came here as a last resort, as refugees,” the letter stated. “They gave birth to children here who were born in Israel and aren’t familiar with any other place; they work — when they’re allowed to; they dream about a better life. And now the Israeli government and Knesset members want to deport these people, who bear the burden of emotional and physical pain. They all want to live here and to live in dignity. Their number is very small, less than half of one percent of the Israeli population, and they don’t create any real problems.”

Also on Monday, three El Al pilots announced they would refuse to fly deported asylum seekers to their destinations. The act is largely symbolic since El Al does not fly directly to Rwanda or Uganda, and deportees usually fly on other airlines through Ethiopia or Jordan.

Meanwhile, the machinery of deportation is being set up. Israel’s Population Immigration and Borders Authority (PIBA) has already started filling approximately 100 new positions to begin the process in March.

Rwanda and Uganda have already accepted about 4,000 migrants and asylum seekers who signed a document saying they had “willingly left” Israel, but the countries so far have not accepted any forcibly deported persons.