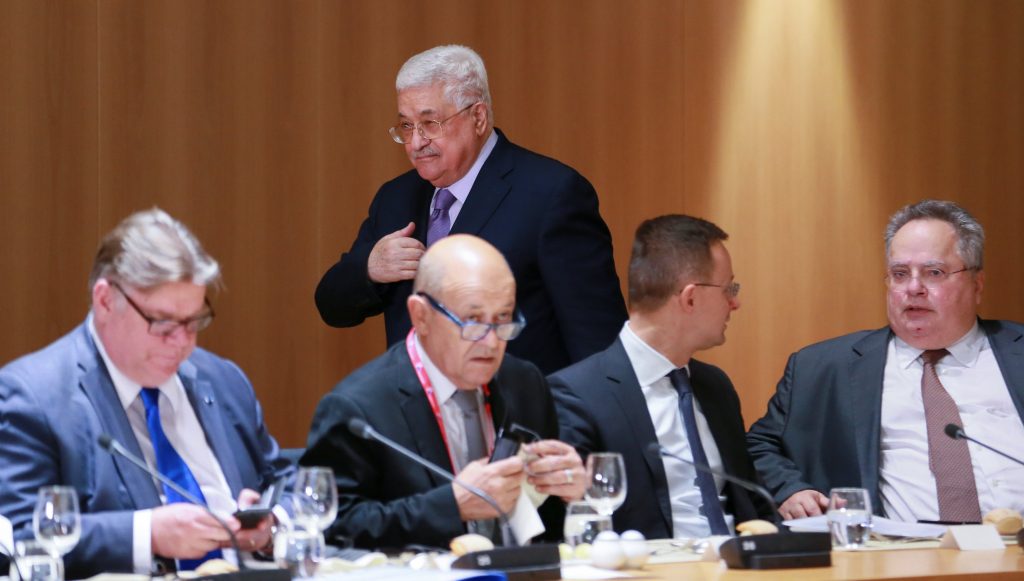 At a meeting in Brussels with EU foreign ministers, Pres. Abbas repeated his call for eastern Yerushalayim as capital as he urged EU governments to recognize a state of Palestine immediately, arguing that this would not disrupt negotiations with Israel on a peace settlement for the region.

While Pres. Abbas made no reference to Pres. Trump’s move on Yerushalayim or U.S. Vice President Mike Pence’s visit to the city on Monday, his presence at the EU headquarters in Brussels was seized on by European officials as a chance to restate opposition to Pres. Trump’s Dec. 6 decision to move the U.S. Embassy.

Mogherini, in what appeared to be a veiled reference to Pres. Trump’s declaration, called on those involved in the process to speak and act “wisely,” with a sense of responsibility.

“I want to reassure President Abbas of the firm commitment of the European Union to the two-state solution with Yerushalayim as the shared capital of the two states,” Mogherini said.

Before Pres. Abbas’ arrival, she was more outspoken, saying: “Clearly there is a problem with Yerushalayim. That is a very diplomatic euphemism,” she said.

Abbas also struck a more diplomatic tone than in his recent public remarks, including earlier this month when he said he would only accept a broad, internationally-backed panel to broker any peace talks with Israel.

“We are keen on continuing the way of negotiations,” Abbas said. “We are determined to reunite our people and our land.”

But his call for the European Union to immediately and officially recognize the state of Palestine was unlikely to be answered, two senior EU diplomats said.

While nine EU governments including Sweden and Poland already recognize Palestine, the 28-nation bloc says such recognition must come as part of a peace settlement.

Only Slovenia has recently raised the possibility of recognizing the state of Palestine. A parliamentary committee there is due to consider the issue on Jan. 31, but the outcome remains uncertain.

“We want to say to Mahmoud Abbas that we want to move … towards an association agreement and to start the process already,” said France’s Foreign Minister Jean-Yves Le Drian.

But offering an EU association agreement to the Palestinians was also fraught with difficulties, diplomats said.

Under EU rules, the agreements must be agreed with sovereign states. France argues that the EU has an association agreement with Kosovo, whose independence is not recognized by all countries, including EU member Spain.

Meanwhile, the local council of a suburb of Paris announced it will recognize the state of Palestine. The symbolic declaration was scheduled to be signed on Monday by Gennevilliers Mayor Patrice Leclerc, a Communist Party of France politician, Le Figaro reported.