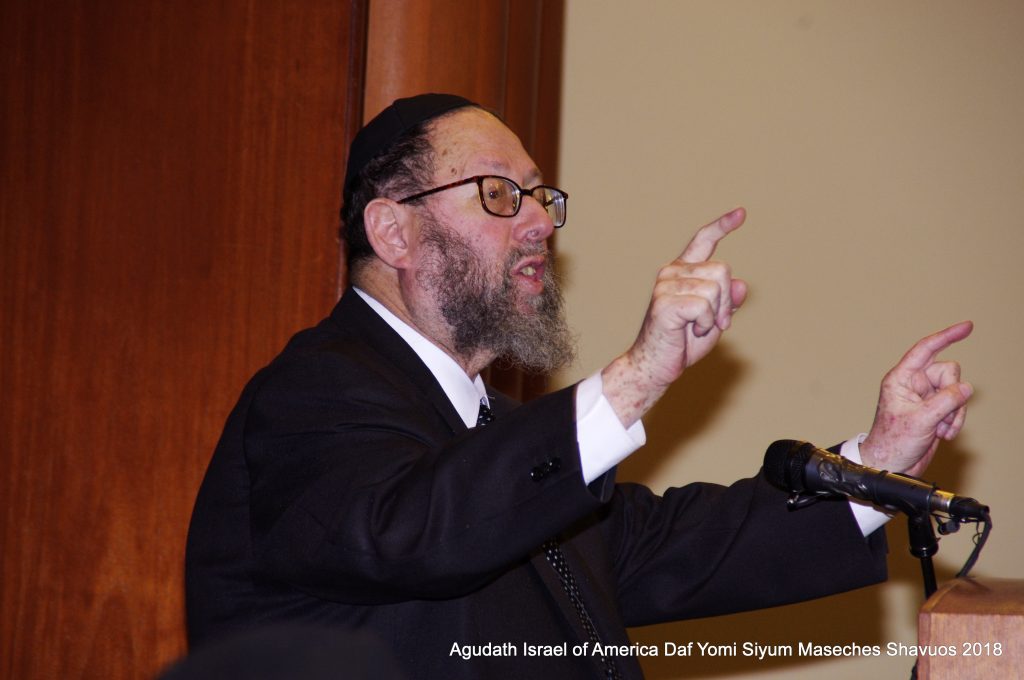 The siyum on Maseches Shavuos took on special meaning for Daf Yomi participants this cycle, as it coincided with the 50th Yahrtzeit of Rav Eliezer Silver, one of the trailblazing leaders of American Jewry during the mid-20th century. Agudath Israel of America’s Daf Yomi Commission – the primary force behind Daf Yomi learning on our continent – arranged a siyum on Tuesday evening in Congregation Zichron Eliezer in Cincinnati, Ohio. The Shul is named in memory of Rav Silver, and is situated in the city where Rav Silver served as Rav for nearly four decades prior to his petirah.

As with all Agudath Israel Daf Yomi Siyumim, the event was broadcast live at satellite locations across North America, and many others participated in the ceremony via telephone or LiveStream. Harav Yissochor Frand, Rosh Yeshivah, Yeshiva Ner Yisroel, traveled from Baltimore to address the event. Rabbi Chaim Dovid Zwiebel, Executive Vice President of Agudath Israel of America, came from New York.

A Legacy Intertwined with Torah

One cannot overstate the symbolism of having this momentous event celebrated in Rav Silver’s “backyard,” in which a thriving Cincinnati kehillah – of which many members learn Daf Yomi – were active celebrants.

Rav Silver was a brilliant talmid chacham and extraordinary masmid, a prized talmid of Rav Chaim Ozer Grodzenski, zt”l, and Rav Chaim Brisker, zt”l. He arrived in the United States in 1906. In addition to serving as a Rav in Harrisburg, Pennsylvania and then Cincinnati, Rav Silver was a pioneer in building Torah-true Yiddishkeit across America and constantly traveled to other communities. He was a marbitz Torah and fought on behalf of uncompromising kashrus, shemiras Shabbos and taharas hamishpachah. He was a leader in Agudath Israel of America, Vaad Hatzalah and Agudas Harabbanim. After World War Two, Rav Silver famously traveled to Europe wearing a U.S. military uniform to provide aid to Jews on the continent and rescue Jewish orphans who were in the hands of Christian monasteries and orphanages.

Rabbi Yisroel Kaufman, Assistant Rav, Congregation Zichron Eliezer, was the mesayem. He elaborated upon the symbolism of the “shvuah” of “Tehi Tzaddik v’al tehi rasha” – be righteous, not wicked, to which every Yid is bound. Cincinnati residents Shmuel and Bernie Moskowitz recited Kaddish in memory of their father, R’ Tzvi, z”l.

Rabbi Zwiebel recounted another historic Agudath Israel event that took place in Cincinnati: The first Agudah convention in America, led by Rav Silver, which was held in 1940. At the convention, Rav Silver proclaimed that Agudah’s primary objective was to spread Torah. He spoke of the “miracle” of Orthodox growth in Cincinnati, a city previously a bastion of the Reform movement. Nearly 80 years later, Rav Silver’s vision has been magnified multifold. “He planted the seeds of the miracle that we are celebrating tonight,” Rabbi Zwiebel summed up. “For that, we need to have hakaras hatov.”

A Heart of Gold

While Rav Silver may be primarily known for his geonus, energy and fearlessness, his compassion and chessed were towering as well. This unique combination was gleaned from his Rebbi, Rav Chaim Brisker, who is described on his matzeivah as the “Rav HaChessed.”

A senior member of the Cincinnati Kehillah, Mr. Hugo Eichelberg, emotionally recounted an anecdote he experienced as a young man. Rav Silver went to be menachem avel a local family and Hugo gave him a ride to the destination. The Rav later inquired of Hugo if he too was menachem avel the family. Hugo replied that he hadn’t, since he didn’t know them. Rav Silver made his displeasure known. “When a mitzvah comes your way, you just do it,” he told the young man. All these decades later, the event remains vivid in Hugo’s mind. “It is a lesson for all of us,” he told the national audience.

The final speaker of the evening was Rabbi Frand, who delivered a riveting tribute to the life and legacy of Rav Silver. The Rosh Yeshivah shared vignettes of Rav Silver’s extraordinary attributes in Torah, yiras Shamayim and middos tovos – many of which would seem to be contradictory. The general in the battle against compromise in Yiddishkeit is the same man who pulled $500 out of his pocket – a hefty sum in those days – to convince a man on his deathbed to divorce his wife, so that she avoids the need for chalitzah with his brother overseas. The same man who would not trust the kashrus anywhere outside his home – even in the homes of Gedolim – spoke at a convention of a more modern-leaning rival of his Agudas Harabbanim, in order to promote shalom.

It is this legacy that is so beautifully embodied by the Daf Yomi program, where a cross section of American Jewry are active participants. “If Rav Eliezer Silver were around today, can you imagine what he would have thought of the Siyum HaShas, with 93,000 Yidden in MetLife Stadium?” Rav Frand exclaimed. “This is all happening because people like Rav Eliezer Silver fought the battles and faced humiliation on behalf of Torah!”