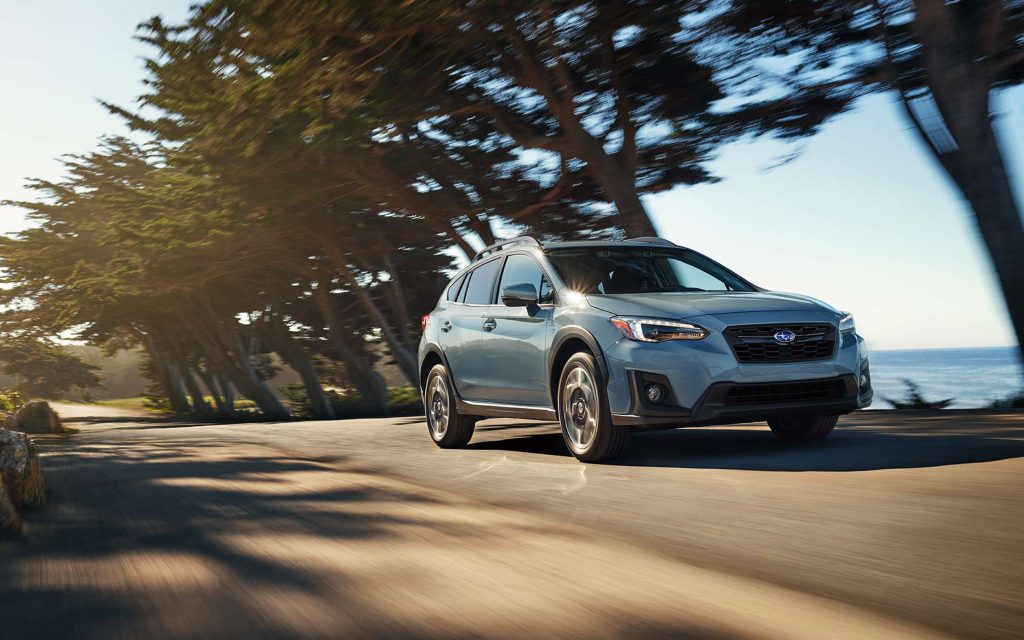 It may be love that makes a Subaru a Subaru, but I suspect that a good deal of research and engineering went into the design, development and manufacturing of the new Crosstrek.

Featuring some key upgrades for the 2018 model year, this capable car could be an ideal vehicle for buyers who want a compact SUV that drives like a sedan but also offers SUV sturdiness and cargo capacity.

Subaru was smart enough, or got lucky enough, to catch the early wave of interest in crossover vehicles that turned into the tidal flood of our current SUV obsession. The Outback of the early 2000s foreshadowed the light-duty adventure vehicles that now dominate the American road.

The newly refreshed Crosstrek is a four-door (five if you count the hatchback, as some people do) SUV that seats five adults comfortably. Not as swanky as the top Outbacks, nor as spare as a stripped-down Forester, the Crosstrek model line starts with the $22,710 2.0i and climbs through the Premium and Limited models, with manufacturer’s suggested retail prices starting at $27,210, including destination charges.

All three are powered by the same four-cylinder “Boxer” engine, which makes a reported 152 horsepower and 145 pound-feet of torque. This engine, new for 2018, is lighter than earlier power plants and is fuel-injected, which produces a few more horsepower and offers improved fuel economy.

Energy is delivered to the road through a continuously variable transmission (a six-speed manual is available on the base model) and Subaru’s excellent all-wheel-drive system.

That’s not a lot of horses under the hood, but the CVT manages the power well, and the continuous all-wheel-drive system, paired with Subaru’s active torque vectoring and traction control, give the car an extremely planted feel.

Around the city, the Crosstrek benefited from tremendous visibility, sporty corner-to-corner acceleration and nimble handling. Parking was eased, too, by the very good backup camera. The steering and suspension felt tight and well-tuned, though the braking seemed a little mushy at times.

It also felt safe. Though it seemed relatively light in the body, and not as sturdy as the higher-end Outbacks — full disclosure, I liked the one I drove for 10 years — the 2018 model was named a Top Safety Pick by the Insurance Institute for Highway Safety, and scored in the top category in all the IIHS’ crash tests.

I enjoyed the drive experience more when I did my own gear selection, via the steering wheel-mounted paddle shifters, standard on the Limited and an available option on the Premium. This put the horsepower and torque to maximum use and increased the car’s spunky feel.

On the freeway, in manual or automatic mode, the Crosstrek felt comfortable and capable, even at higher speeds.

It’s not quite as quiet as one might like, despite an improved “acoustic” windshield, and suffers from the same wind and tire noise that plagues a lot of four-wheel-drive SUVs. A daylong drive might get tedious, but a run to Malibu and back, enjoying the Harman Kardon optional audio system, was perfectly pleasant.

The EyeSight system is an optional upgrade on the Premium and Limited Crosstreks. When set to moderate freeway speed, it helped the model I drove slow gradually when the traffic slowed, and speed up gently as the traffic returned to normal, without any of the “Hey, look out!” jerkiness that seems baked into some manufacturers’ ACC systems.

Subaru’s onboard infotainment system comes in two versions and includes a 6.5-inch screen on some models and an 8-inch screen on the Limited. In that formulation, it comes standard with Apple CarPlay, Android Auto, along with voice-activated controls, a CD player, dual USB ports and an easy-to-initiate Bluetooth system.

The model I drove also had standard front seat heaters, a reminder of how well Subaru has done with its four-wheel-drive, four-season cars that function so admirably in rough-weather states. (According to a Kelley Blue Book report from last year, the Outback was the No. 1 selling vehicle in Washington, Oregon and Colorado in 2016.)

Of the three trim lines, only the top 2.0i Limited model comes standard with Subaru’s X-mode and hill-descent control.

I didn’t spend enough time off-road to take advantage of these features, but when paired with the Crosstrek’s advertised 8.7 inches of ground clearance, increased cargo space and standard roof rails, they should enable some of the kind of backcountry adventuring that Subaru highlights in its advertising campaigns.

How many will test the Crosstrek’s off-road mettle? Folks in icy, snowy climes will find the all-wheel drive useful, and will use that roof rack for skis and snowboards. Southern California drivers may want to spin some sand in Joshua Tree or hit the local slopes once the snow starts falling again.