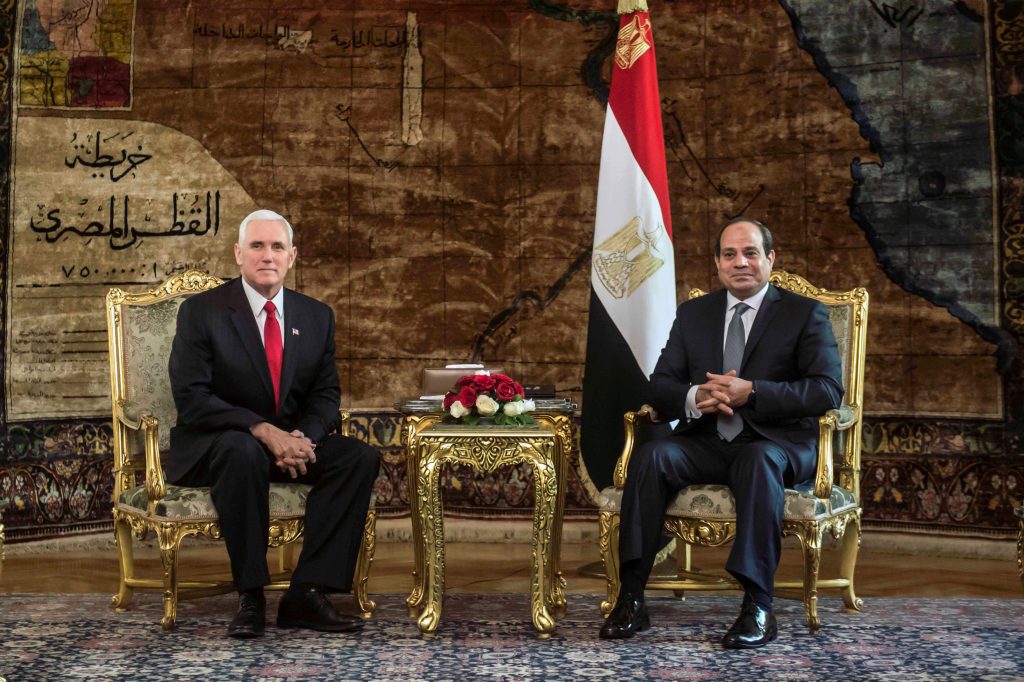 U.S. Vice President Mike Pence kicked off a trip to the Middle East on Saturday with a visit to Egypt, where he pledged firm U.S. backing to President Abdel Fattah al-Sisi in the nation’s fight against terror.

Pence said ties between the two countries had never been stronger after a period of “drifting apart” and that President Donald Trump sent his gratitude to Sisi for implementing economic reforms.

“We stand shoulder to shoulder with you in Egypt in the fight against terrorism,” Pence said.

Sisi said the two men discussed ways to eliminate the “disease and cancer” of terrorism and called Trump a friend.

Pence’s quick visit comes at the start of a three-country tour that also includes stops in Jordan and Israel. This is the highest-level visit from a U.S. official to the region since December, when Trump recognized Jerusalem as Israel’s capital.

Pence, a conservative Christian who was one of the driving forces behind the move, and Sisi did not discuss the Jerusalem decision during their public remarks in front of reporters.

Egypt has faced security problems, including attacks by Islamic State terrorists in the North Sinai region. Trump has made the fight against Islamic State a top priority.

Upon arriving at the palace where Pence and Sisi met, reporters traveling with the vice president initially were not allowed to exit their van and enter the building. Eventually they were admitted and allowed to attend part of the meeting.

From Cairo, Pence heads to Jordan, where he will meet with King Abdullah, a close U.S. ally. Abdullah warned against declaring Jerusalem as Israel’s capital, saying it would have a dangerous impact on regional stability and obstruct U.S. efforts to resume peace talks.

Pence will end his trip in Israel, where he will be warmly welcomed in the aftermath of Trump’s decision. He plans to meet with Prime Minister Binyamin Netanyahu, address the Knesset and visit the Kosel.

Pence is not scheduled to meet Palestinian leaders during his visit to the region.