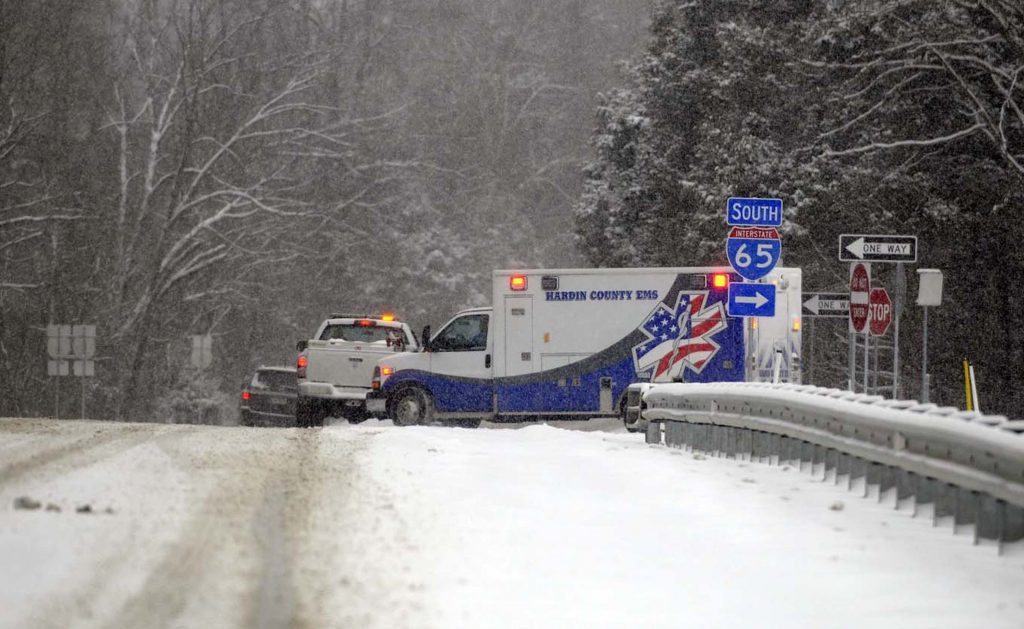 Several Southern states will be dealing with the lingering effects of a slow-moving winter storm that dumped half a foot (15 centimeters) of snow on North Carolina’s largest cities, dusted the Deep South and killed at least 10 people.

From Charlotte to Raleigh, North Carolina’s five most populous cities all saw significant snow from a system that followed an atypical west-to-east path across the state — and moved more slowly than forecasters had predicted. By late Wednesday afternoon, Winston-Salem, Greensboro and Durham each had more than 6 inches, while some places saw as much as 10 inches.

In northern Durham County, Ben Kimmel marveled as snow blew across his property all day Wednesday. Meteorologists say parts of the county saw 8 inches of snow. Kimmel said he had propane to heat his house if he lost electricity and has extra water, too.

“This is really unusual for this area to have this much snow,” said the 49-year-old, who has lived in the state most of his life. Kimmel said his shoveling priorities would be walkways for him and his wife.

Elsewhere, icicles hung from statues in normally balmy New Orleans on Wednesday, and drivers unaccustomed to ice spun their wheels across Atlanta, which was brought to a near-standstill by little more than an inch of snow.

At least four people died in Louisiana, including a man knocked off an elevated portion of Interstate 10 in New Orleans when a pickup spun out on ice, and an eight-month-old baby in a car that slid into a canal in suburban New Orleans. The baby’s mother was in critical condition.

Two others died along an icy stretch of I-75 southeast of Atlanta when a driver lost control and hit them, one of them inside a stopped car and the other standing beside it, authorities said.

One person died in a weather-related traffic accident in West Virginia. In the freezing Houston area, a homeless man was found dead behind a trash bin, apparently of exposure, while an 82-year-old woman with dementia succumbed to the cold after walking away from her home. Also, a woman was discovered dead in a snowy park near City Hall in Memphis. The temperature was around 10 degrees Fahrenheit when she was found.

In North Carolina, state troopers responded to 1,600 crashes while Charlotte police reported another nearly 200 by late Wednesday. Gov. Roy Cooper said state officials weren’t aware of any fatalities. About 30,000 homes and businesses were without power, including about half in Durham and Wake counties.

“This has been quite a white-out for our state,” Cooper said at a weather briefing late Wednesday. “This has been a slower-moving storm than anticipated so it’s dumping more snow on us.”

The cold drove soaring electrical usage in parts of the South, where many homes rely on electricity for heating and hot water. A regional electricity grid manager, the Midcontinent Independent System Operator, asked Wednesday that customers in most of Arkansas, Louisiana, Mississippi and a slice of eastern Texas reduce their power usage Thursday morning after usage Wednesday hit a winter record. If supply can’t meet demand, local utilities would have to resort to rolling blackouts.

Cities from Atlanta to Raleigh saw business slow to a crawl. Downtown Atlanta was eerily quiet. Dozens of accidents were reported across the metropolitan area, one involving a salt truck.

After raking North Carolina, forecasters expected the system to move offshore. Snow tapered across the state by late Wednesday, but windchill warnings remained in effect overnight.
“This system should actually transition off the coast and not give too many more people issues after [Wednesday],” said James Morrow, a National Weather Service meteorologist in Raleigh.

He said one reason that so many North Carolina cities have gotten hit is the storm’s west-east motion, which differs from many winter storms that move in a more northeastern direction.

“This one was a real surprise, so it makes it more fun,” Klosterman said.