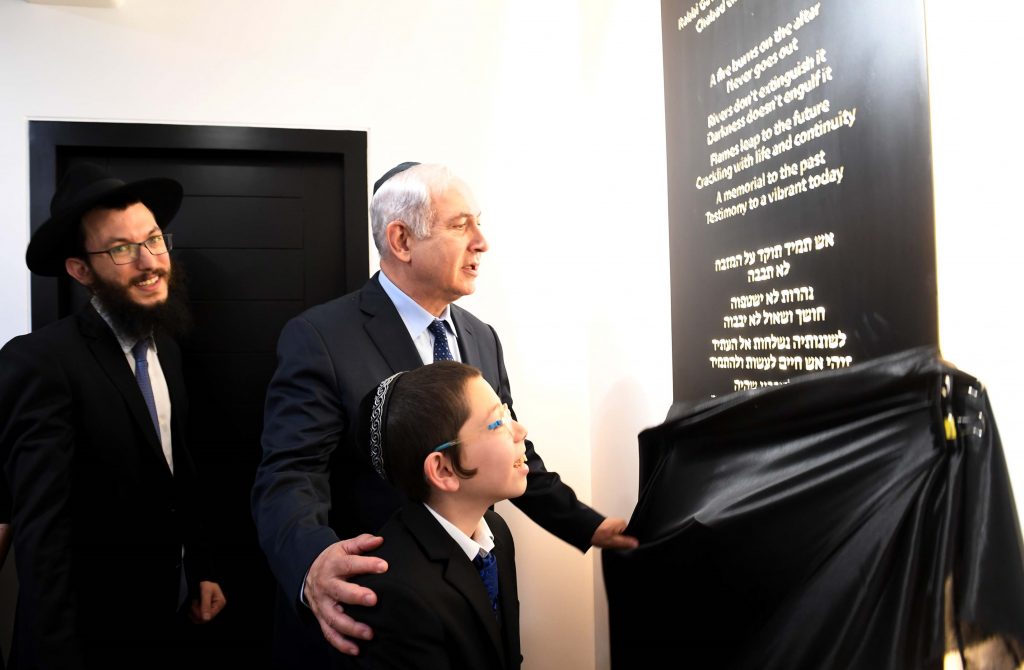 On the last leg of his India journey, Prime Minister Binyamin Netanyahu on Thursday afternoon visited the Mumbai Chabad House, where he met with Moshe Holtzberg, the now-11 year-old yasom whose parents were tragically murdered in the 2008 terrorist attack on 11 different sites in Mumbai, including Chabad House. PM Netanyahu and Moshe toured the building where the young boy’s parents Rabbi Gavriel Holtzberg and Rivka Holtzberg, were murdered along with four other people.

In one of the rooms Netanyahu and Moshe discovered a marking on the wall that signified how tall Moshe had grown. Other memories were evoked as the two visited the building and recounted the events of the day of the attack, November 26, 2008. A special memorial corner was dedicated on Thursday, with Moshe cutting the rope that officially opened the site.

“I am moved to be here with you and with Moshe,” PM Netanyahu said to the large crowd that gathered at the site. “I can see, Moshe, that you are growing and developing. Soon you will be a bar mitzvah, and after that, when you establish a family, I hope to be invited to your simchos.

“The Jewish people have accompanied you throughout your journey and for good reason,” the prime minister said. “What happened here expressed anti-Semitism, but also love of Israel – the love of Israel of your parents, z”l, of the Chabad shluchim here and around the world who embrace the Jewish people around the world, whoever and wherever they are, even in the heart of Mumbai.”

Speaking at the event, Moshe said that he was very emotional. “I lived here for two years and absorbed into my soul the great mission of my parents – to leave a settled land and go to a low place on the mission of the Rebbe. This house was open to all Jews, whoever they were, who sought a warm corner for the neshamas. I want to thank Hashem for giving us such a wonderful prime minister, who invited me to join him on his trip to India. After nine years, I returned to my room, to my home. I want to thank Hashem for performing a nes for me in this place.”