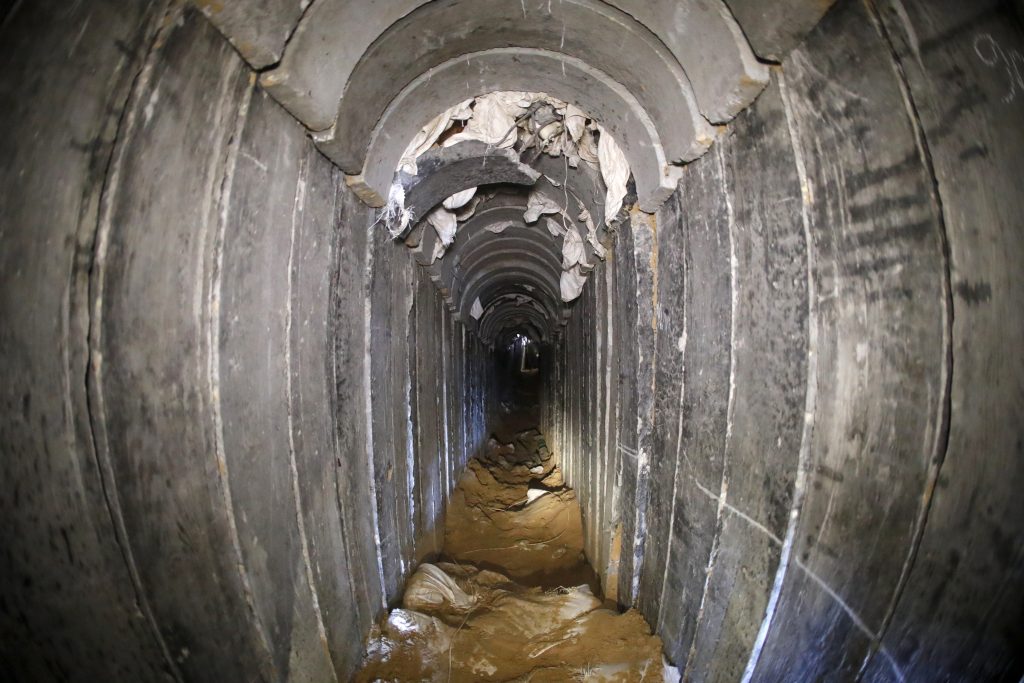 Massive earthworks and mounds of sandy soil line the Israel-Gaza border as the Israeli military forges ahead with an ambitious subterranean barrier to detect and prevent attack tunnels from reaching southern Israel from the Palestinian enclave.

Israeli military officials on Thursday touted the secretive project as a major deterrent against what Israel has seen as a strategic threat since the last war against Hamas exposed the extent of the tunnels. Israel has made uncovering the tunnels from Gaza a priority and in recent months has demolished at least three through a combination of intelligence, infantry operations and hi-tech sensors.

“The technology really is groundbreaking,” Israeli military spokesman Lt. Col. Jonathan Conricus said in a briefing with journalists on the border with the Gaza Strip. “The message to Hamas is: ‘We now have this system which can detect and destroy terror tunnels that violate Israeli sovereignty.'”

Conricus said that the anti-tunnel barrier under construction “provides a significant challenge for anyone tunneling below,” without elaborating.

Excavating machines, concrete mixers and hundreds of workers toil furiously as part of Israel’s deadly underground game of cat and mouse with Hamas and other Gaza terrorist groups, such as Islamic Jihad.

The barrier — hundreds of feet below ground, studded with sensors and topped by a 26-foot metal fence — has an estimated price tag of $700 million and is on track for its slated completion in mid-2019, a senior Israeli military official said Thursday. Thus far, crews working 24 hours a day, six days a week, have completed 2.5 miles of the 40-mile border barrier.

Wary of tipping off enemies, Israeli military officials were reticent to discuss particulars concerning the barrier’s tunnel detection capabilities, or precisely how far into the earth the wall goes.

“It’s deep enough,” a senior Israeli military official said. Cranes hoisted 75-foot-long rebar cages into the air, and the official said that “several get welded together” to form the concrete wall’s reinforced spine.

Thus far, Hamas has not tried to disrupt construction, and giant earth berms protect workers from spying eyes and small arms fire. A senior Israeli military official said that while neither side wants to start a new round of violence, minor incidents along the border had the potential to snowball into a larger conflict quickly.

However, the military is determined to complete the barrier. “Israel will defend this barrier in every way possible,” an IDF official said in August. “This barrier will be built. Period. At any price.”

The military on Thursday also showcased a tunnel destroyed in late October — its demolition left a dozen terrorists dead.

The concrete-lined shaft penetrated hundreds of yards into southern Israel toward nearby Kibbutz Kissufim. The tunnel was located less than two miles from the community, and is believed by the IDF to have been intended to be used to attack Kissufim and/or abduct Israeli soldiers.

Another tunnel was demolished late last year, and on Sunday, Israel said it destroyed a 1-mile tunnel built by Hamas which stretched from the Gaza Strip, through Israel and into Egypt.

An Israeli military map of the Gaza Strip shown to reporters illustrated the miles of Hamas and Islamic Jihad tunnels honeycombing the Palestinian territory. The military estimates that working around the clock, a couple dozen terrorists can dig 10 yards of tunnel per day.

As construction progresses, the IDF says it expects to find and destroy several more attack tunnels crossing under the border from Gaza.

Assuming the tunnels are destroyed and abandoned, Gazan terrorists are expected to turn to other methods of assault, such as drones, sea-based attacks or more advanced types of missiles, and the IDF is preparing to counter those as well.