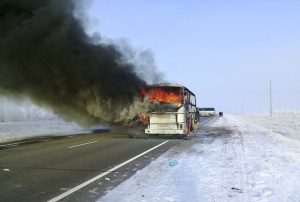 Emergency officials in Kazakhstan say that 52 people have been killed in a bus fire.

The Emergencies Department of the former Soviet nation in Central Asia said Thursday’s tragedy happened in the northern Aktobe region. Authorities said that only five of the 57 people on the bus managed to escape the blaze. They are being treated for injuries.

Officials said that according to preliminary information all of the victims were citizens of neighboring Uzbekistan.
The cause of the fire wasn’t immediately clear, but investigators suspect it was triggered by a short circuit.