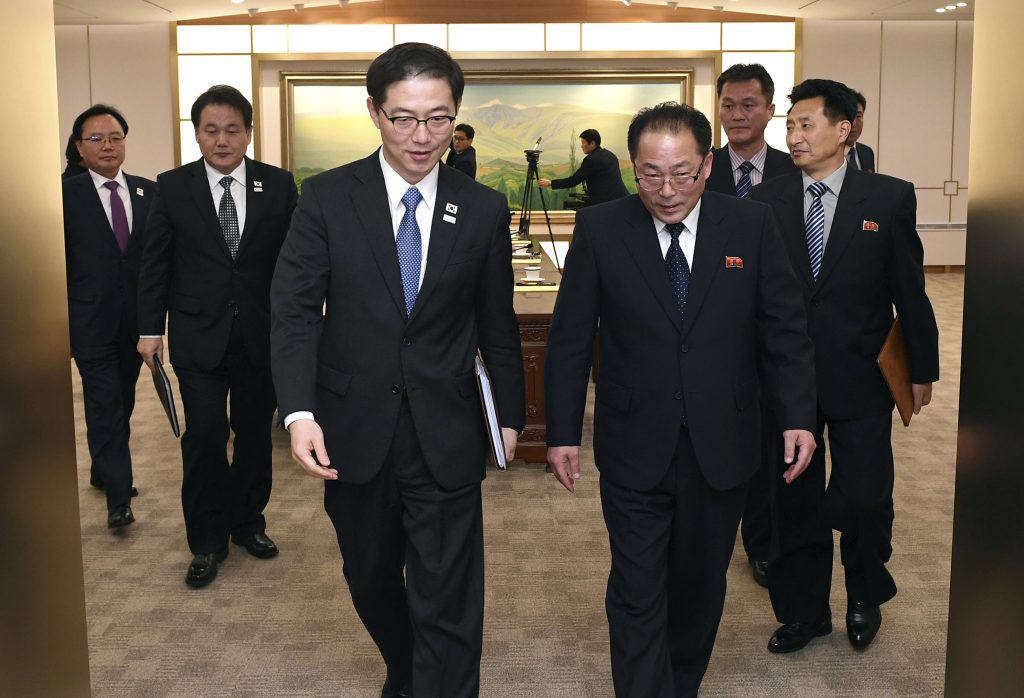 The rival Koreas agreed Wednesday to form their first unified Olympic team and have their athletes parade together for the first time in 11 years during the opening ceremony of next month’s Winter Olympics in South Korea, officials said.

The agreements still require approval from the International Olympic Committee. But they are the most prominent steps toward rapprochement achieved by the Koreas since they recently began exploring cooperation during the Olympics following a year of heightened tension over the North’s nuclear weapons program.

During their third day of talks at the border in about a week, senior officials reached a package of agreements including marching together under a blue and white “unification flag” depicting their peninsula in the opening ceremony, Seoul’s Unification Ministry said.

A joint statement distributed by the ministry said the North Korean Olympic delegation will travel to South Korea across their heavily fortified land border before the Feb. 9-25 Pyeongchang Games.

Ahead of the Olympics, the Koreas will hold a joint cultural event at the North’s scenic Diamond Mountain and have non-Olympic skiers train together at the North’s Masik ski resort, according to the statement. It said the North also plans to send a 150-strong delegation to the Paralympics in March.

The IOC said recently it has “kept the door open” for North Korea to take part in the games. IOC officials are to meet with sports and government officials from the two Koreas and officials from the Pyeongchang organizing committee in Switzerland on Saturday.

The IOC said in a statement Wednesday that it has “taken note of a number of interesting proposals from different sources.”

“There are many considerations with regard to the impact of these proposals on the other participating NOCs (national Olympic committees) and athletes. After having taken all this into consideration, the IOC will take its final decisions on Saturday in Lausanne,” it said.

The two Koreas have sent joint teams to major international sports events twice previously, both in 1991. One event was the world table tennis championships in Chiba, Japan, where the women’s team won the championship by beating the powerful Chinese, and the other was soccer’s World Youth Championship in Portugal, where the Korean team reached the quarterfinals.

During an era of detente in the 2000s, their athletes marched together in the opening and closing ceremonies of nine international sporting events including the 2000 Sydney Olympics, but they failed to produce a joint team. Their last joint march was at the Asian Winter Games in Changchun, China, in 2007.

The current reconciliation mood began after North Korean leader Kim Jong Un said in a New Year’s speech that he was willing to send a delegation to the games. Critics have said Kim’s overture is an attempt to use improved ties with South Korea to weaken U.S.-led international sanctions on North Korea while buying time to perfect his nuclear weapons program.

The moves nevertheless have provided a temporary thaw in the Koreas’ long-strained ties and fostered optimism that North Korea won’t launch any new provocations, at least during the Olympics. Last year, North Korea carried out its sixth and biggest nuclear test explosion and test-fired three intercontinental ballistic missiles, and Kim and U.S. President Donald Trump traded threats of war and crude insults against each other.

Some conservative critics say North Korea’s cheering and artistic groups are too big, and worry the North may try to steal the show at the Olympics to launch what they call a “peace offensive” to try to show it’s a normal country despite pursuing nuclear weapons.

North Korea under Kim has made sports, and especially success in international sporting events, a high priority.

When traveling abroad, however, North Korean athletes and coaches tend to cloister themselves away from outsiders when they are not competing or practicing. Defections are likely a concern, along with what their minders might deem to be ideological “contamination,” so they are kept under close scrutiny.

“If South and North Korea form one team and compete in the games, that will be an everlasting historic event, which I think will move our people and people around the world,” South Korean President Moon Jae-in said Wednesday.