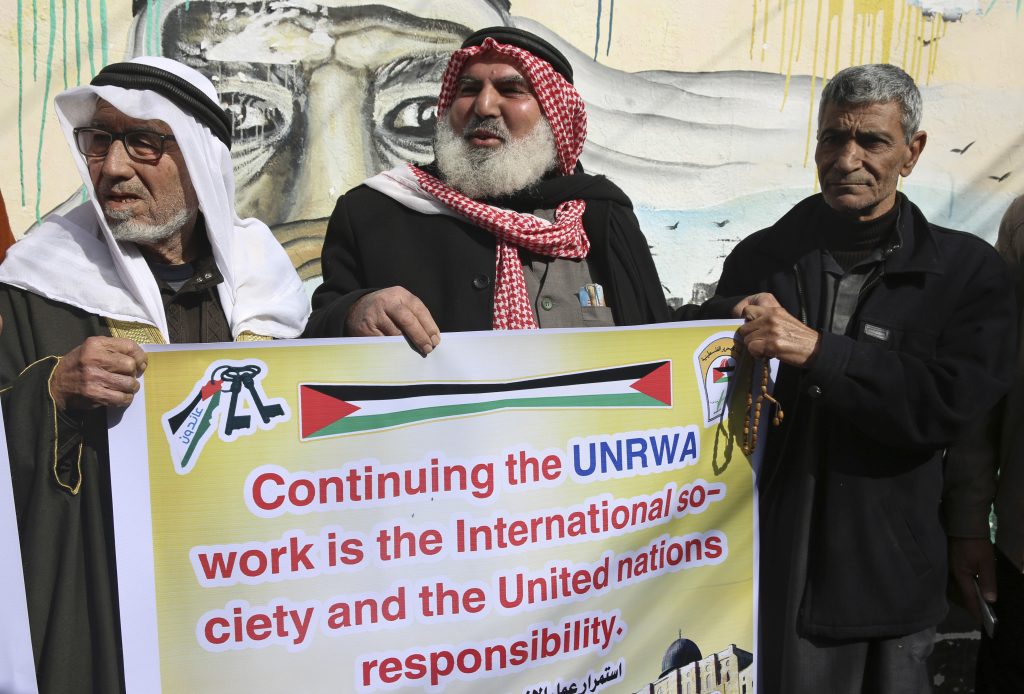 In the wake of the U.S. decision to stop over half its annual funding of UNRWA, the agency that provides assistance to Palestinians in the Mideast turned to the international community to plug the $60 million budget gap.

“At stake is the dignity and human security of millions of Palestine refugees in need of emergency food assistance and other support,” UNRWA commissioner-general Pierre Krahenbuhl said in a statement.

UNRWA was established by the U.N. in 1949 after hundreds of thousands of Palestinians fled or were expelled from their homes in the 1948 war. It says it currently aids five million registered Palestinian refugees, including their children and grandchildren.

Belgium stepped in on Wednesday with an immediate disbursement of $23 million, according to The Associated Press.

Belgian Deputy Prime Minister Alexander De Croo explained that the money represents his country’s allocation for three years, but because of the urgency of the matter, it will be “disbursed immediately.”

The official Israeli reaction to the Trump administration funding cut has been approving.

Ambassador to the U.N. Danny Danon said that it was time for the “absurdity to end.”

“UNRWA has proven time and again to be an agency that misuses the humanitarian aid of the international community and instead supports anti-Israel propaganda, perpetuates the plight of Palestinian refugees and encourages hate,” he said.

“Just over the last year alone, UNRWA officials were elected to the leadership of Hamas in the Gaza Strip, UNRWA schools denied the existence of Israel, and terror tunnels were dug under UNRWA facilities. It is time for this absurdity to end and for humanitarian funds to be directed toward their intended purpose – the welfare of refugees,” Danon said in a statement issued Wednesday.

“I fully agree with President [Donald] Trump’s strong criticism of UNRWA…an organization that perpetuates the problem of the Palestinian refugees. It also perpetuates the narrative of the so-called ‘right of return’ with the aim of eliminating the state of Israel, and therefore UNRWA must disappear.”

MK Sharren Haskel (Likud), chair of the Knesset Lobby for Reform with UNRWA, expressed a similar view on Tuesday night:

“I welcome the American decision to cut $60 million from its funding to UNRWA,” she said. “[Palestinian Authority chairman] Mahmoud Abbas revealed his true face to the world and said in his speech what we knew long ago, [that he is] the leader of a terrorist organization, an anti-Semite and a Holocaust denier.”

“It is no wonder that there is a system of anti-Israel incitement in UNRWA’s educational institutions, which has become an arm of the Palestinian Authority,” said Haskel.

Israeli thinking about cutting UNRWA funding is known to be more equivocal, however.

The IDF is reportedly against such budgetary reductions, which it fears could unleash more violence.

In early January, former IDF spokesman Peter Lerner said that “refugee camps have historically been hotbeds for terrorist activities,” adding that “weakening this population will only lead to more extremism and violence.”

There have also been media reports in recent days ahead of the Trump decision, that behind the scenes in Washington, Israel was counseling a partial reduction in funding, rather than the total cutoff that was contemplated, lest it have a destabilizing effect.

The response of UNRWA on Wednesday, appealing for help to make up the lost U.S. donation, was actually in line with expectations in Washington, according to State Department spokeswoman Heather Nauert, who said that other countries should contribute more to the agency.

Nauert later said the U.S. “would like to see some reforms be made” in UNRWA, and stressed, “This is not aimed at punishing anyone.”