With the Push of a Button 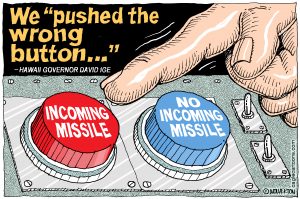 At about 8:07 a.m. local time, cellphones in Hawaii began to sound off with the aggressive, long pulsating tone that normally indicates a flash flood warning.

As the residents of the group of islands that comprise the 50th state to join the Union glanced at their phones, they read a most ominous Emergency Alert in capital letters: “Ballistic missile threat inbound to Hawaii. Seek immediate shelter. This is not a drill.”

The message rapidly sparked a doomsday panic, as parents held their children close, crawled into bathtubs and prepared for what they thought was the end. Some jumped into cars and sought to flee, while some drivers actually abandoned their cars and sought refuge in a tunnel.

Many assumed that the missile was likely coming their way from North Korea, whose bellicose dictator has repeatedly threatened the United States.

It took nearly 40 minutes for the alert to be cancelled and to publicize that it was a false alarm. As it turned out, this extraordinarily traumatic experience was caused when someone doing a routine test at the state’s Emergency Management Agency hit the “live alert button” during a shift change.

The head of the Federal Communications Commission, whose agency undertook an immediate investigation into what had occurred, minced no words in describing his perspective on the error. The Hawaiian government “did not have reasonable safeguards or process controls in place to prevent the transmission of a false alert,” FCC Chairman Ajit Pai said in a statement, adding that the mistake was “absolutely unacceptable.”

“False alerts undermine public confidence in the alerting system and thus reduce their effectiveness during real emergencies,” he stressed.

For her part, Homeland Security Secretary Kirstjen Nielsen expressed her worry that, somewhat like the tale of the child who cried wolf, future governmental warnings would not be taken seriously.

“I would hate for anybody not to abide by alerts and warnings coming from government systems,” Nielsen told Fox news. “They can trust government systems. We test them every day. This is a very unfortunate mistake, but these alerts are vital. Seconds and minutes can save lives.”

As President Trump pointed out when asked by reporters about the story, state officials deserve credit for taking full responsibility and taking steps — including changing the protocols to require two people to send an alert of this kind — to try to avoid a recurrence.

Yet while this particular case has been chalked up to human error, it illustrates how, in the world of instantaneous communications, the ability to reach so many people with a single push of a button is a double-edged sword. When used properly, it can doubtlessly save many lives. When misused, it can have disastrous effects.

Among the questions that should be asked isn’t merely what would prevent such a mistake from happening again, but what measures are in place to ensure that hostile elements don’t hack into such a system and spread mayhem and panic — or even worse. While in this case the erroneous message instructed people to seek shelter, a fake message could theoretically include instructions that would be dangerous to the population.

The notion of a populace thrown into a panic by a false message or a misunderstanding of some sort is an age-old problem.

Some nine centuries ago, in 1184, the astrologers of Toledo are said to have addressed a letter to Pope Clement III, asserting that the world would come to an end about two years later, in September 1186. Word of the letter caused panic in much of Europe. Even after that date came and went, numerous copycat letters appeared over the years to come; the culprits merely changed the dates to suit their fancy.

More recently, in October of 1938, a radio show comprised of news bulletins describing how fiery aliens from Mars had invaded Earth managed to fool many listeners into thinking that a real attack was underway. The fact that the show had clearly indicated at the beginning of the broadcast, as well as twice during the broadcast, that it was a dramatization of a fictional tale, apparently didn’t suffice to reassure the public.

At the time, many newspapers, which saw radio as serious competition, ran headlines such as “Radio Listeners in Panic, Taking War Drama as Fact,” and “Fake Radio War Stirs Terror Through U.S.” Later researchers argued that the number of people listening to the broadcast was relatively small and much of the hysteria reported was actually wild exaggeration.

Yet in the case of the false alert in Hawaii, there seems to be little doubt that the reports of widespread panic were real, underscoring how vital the need for securing these types of communications systems are. All it took was a single press of a wrong button, and the lives of so many people were so strongly impacted. This was another humbling reminder of the power of a single move of a finger and the enormous responsibility that lies in the hands of anyone who has access to any sort of messaging device.