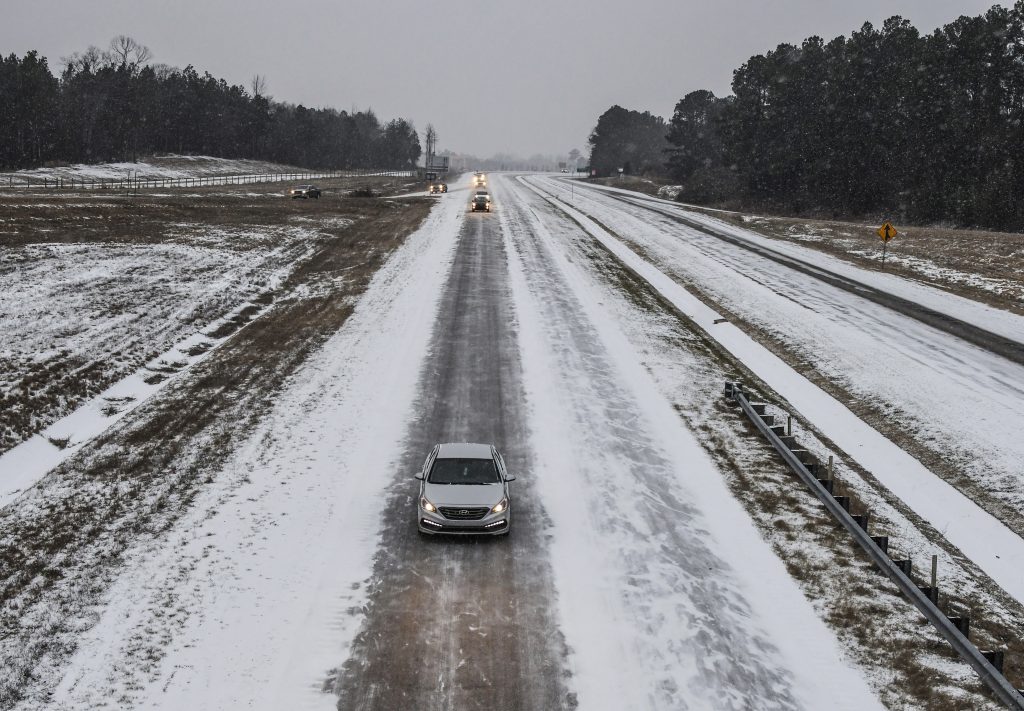 Winter weather turned travel treacherous across the South, shutting down interstates in Louisiana, causing highway crashes in Kentucky and closing airport runways in Texas, as snow turned the red clay white and prompted schools to close across the region.

Snow began falling during the pre-dawn hours Tuesday in Louisiana, where freeways were closed in and around Shreveport as the winter weather system took aim at other states, forecasters said.

With the weather system moving east and plunging temperatures expected right behind it, winter storm warnings were issued for parts of Louisiana and Mississippi.

In Kentucky, multiple crashes closed a 10-mile section of Interstate 24 on the west side of the state and blocked southbound lanes of Interstate 65 in south-central Kentucky, including a five-vehicle pileup that involved a Greyhound bus, authorities said. That crash, which injured multiple people, also involved two commercial vehicles and two passenger vehicles Tuesday morning on I-65.

In Tennessee, forecasters called for up to 6 inches of snow in the central part of the state, which includes the Nashville area.

Hundreds of flights were canceled at Texas airports — including Houston, San Antonio and Austin — where frigid temperatures left runways dangerously icy. Forecasters warned mariners along the Texas coast to be on guard for gale-force winds.

Snow was falling Tuesday morning in Louisiana, Mississippi and Alabama, and was expected to move into Alabama and Georgia later in the day.

“You can’t see the black ice — it’s invisible,” said Younger, who had been driving on roads since 5 a.m. Tuesday and could feel the back end of his patrol car begin to slide at times.

“You want to just barely touch the brakes in that situation,” he said. “A lot of people get scared and they want to jam on the brakes and that makes it worse.”

What looked like about 1 inch of snow covered the hood of Glenn Springfield’s truck when he went outside Tuesday morning in northeast Louisiana, he said. Springfield, a spokesman for the Ouachita Parish Sheriff’s Office, said the worst highway conditions were about 100 miles west of him — but the snow was heading east.

“We’re just advising people that if you don’t have to work, stay home,” Springfield said.

Ice had coated roads and bridges in 36 of Mississippi’s 82 counties, mostly in the northern and central parts of the state, the Mississippi Department of Transportation said in a statement Tuesday morning. Some of the heaviest snow in Mississippi was expected in the state’s Delta region, where up to 3 inches was possible.

In Alabama, Gov. Kay Ivey declared a state of emergency. Numerous businesses and government offices closed because of the threat.

Jim Wimberly was at work Tuesday morning managing a Dollar General story in Tuscumbia, in northwest Alabama, despite freezing precipitation on the ground and a forecast of more on the way. Shoppers had emptied the shelves of bread, but the milk case was still stocked because of a delivery on Monday.

“The roads are a little slick right now. It’s been sleeting for about the last hour or two hours,” said Wimberly. “Half of my parking lot is white and half of it is just regular asphalt.”

Alabama officials were trying to avoid a repeat of four years ago, when a winter storm blanketed central Alabama and left motorists stranded on roads in metro Birmingham for hours. Teachers and students camped out in schools.

Forecasters aren’t predicting a large amount of snow for Alabama — just 2 inches or less with more in spots. But they say temperatures steadily falling into the teens could freeze anything that comes down.

“It’s coming down as snow, but with these cars driving over it looks ice on the ground,” said Payne, who planned to walk home from her job at Friendly Shop if roads got too bad. “The driveways of businesses are white.”