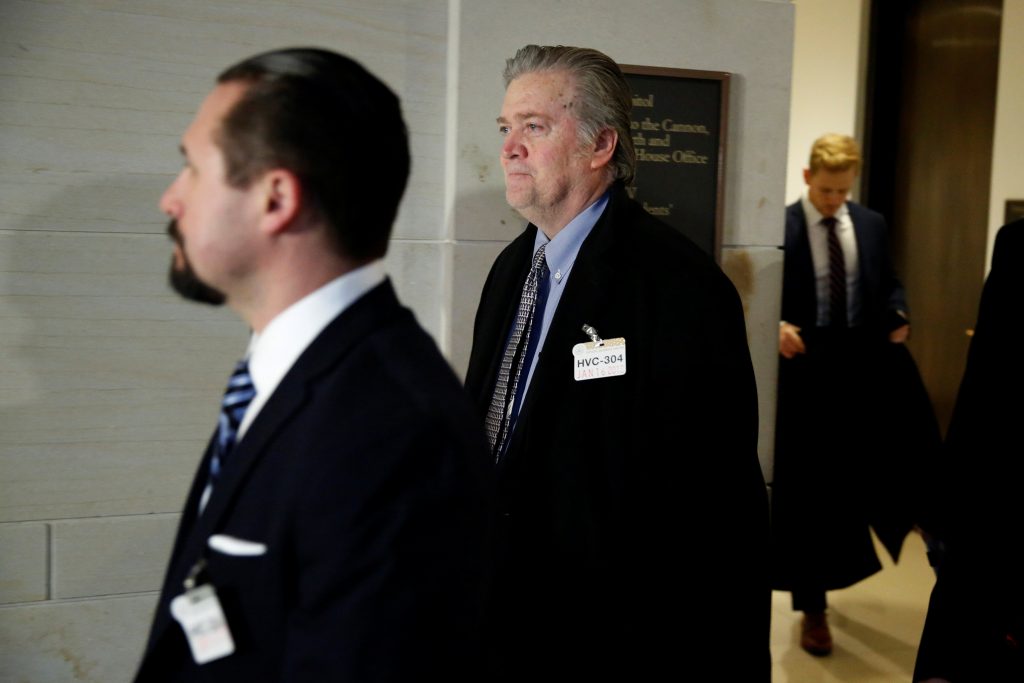 President Donald Trump’s former chief strategist Steve Bannon has been subpoenaed by Special Counsel Robert Mueller to testify before a grand jury in a probe into alleged ties between Russia and Pres. Trump’s 2016 presidential campaign, The New York Times reported on Tuesday, the same day Bannon was testifying before the House Intelligence Committee.

It was the first time Mueller is known to have used a subpoena against a member of Pres. Trump’s inner circle, the Times said. It cited a person with direct knowledge of the matter.

A spokesman for Mueller’s office declined comment. Bill Burck, a lawyer for Bannon, could not immediately be reached for comment.

Bannon, a champion of Pres. Trump’s “America First” agenda, was among the Republican’s closest aides during the 2016 election campaign, the presidential transition and during his first months in office. Bannon was fired in August 2017, and returned to the alt-right website Breitbart News. He continued to speak with Pres. Trump and tried to promote the president’s agenda.

Recently, Pres. Trump and Bannon had a bitter public falling-out over comments Bannon made to author Michael Wolff in a new book, in which Bannon is quoted as describing a June 2016 meeting between Trump associates and a Russian lawyer as “treasonous” and “unpatriotic.”

When news of Bannon’s comments to Wolff surfaced this month, Pres. Trump issued a statement, saying of Bannon, “When he was fired, he not only lost his job, he lost his mind.”

Six days later, Bannon stepped down from his post as executive chairman at Breitbart News.

Mueller’s subpoena, which was issued last week, could be a pressure tactic to induce Bannon to cooperate fully with his investigation, The Times reported.

Separately on Tuesday, Bannon was meeting with the House of Representatives Intelligence Committee. He is the latest high-profile figure to testify before the panel as part of its investigation into Russia interference in the U.S. election.

The House panel was also aiming to find out President Donald Trump’s thinking when he fired FBI Director James Comey, according to a source familiar with the panel’s interview of Bannon.

Bannon also is likely being pressed on other “executive actions” taken by Pres. Trump that have drawn interest from congressional investigators prying into ties between Pres. Trump’s campaign and Russian operatives, said the source, who spoke on condition of anonymity because the source was not authorized to speak on the record about the committee’s session, which was not public.

Those key elements bear directly on the criminal investigation now underway by special counsel Mueller, who is investigating if there was collusion between the Trump campaign and Russia and whether the president obstructed justice by firing Comey or by taking other actions to thwart investigators.

As of early Tuesday afternoon, it appeared possible that Bannon could be interviewed all day by the House Intelligence panel — on par with other top-tier witnesses who have been called before congressional investigators for marathon sessions. Bannon started with the committee at 8 a.m., but questioning did not start until later in the morning.

Bannon last year had largely avoided the scrutiny of congressional investigators, who instead focused much of their energy on trying to secure interviews with top witnesses like Manafort and former national security adviser Michael Flynn.

But Bannon played a critical role in the campaign, the presidential transition and the White House — all during times now under scrutiny from congressional investigators looking for possible evidence of a connection between Pres. Trump’s operations and Russia.

Bannon recently retained the same lawyer being used by former Trump chief of staff Reince Priebus and White House general counsel Don McGahn. Neither Bannon nor his lawyer immediately responded to a request for comment on Monday.

The House Intelligence Committee is speeding toward a conclusion of its interviews in its Russia investigation. The final result could be marred by partisan infighting, raising the probability that Republicans on the panel will issue one set of findings and the Democrats will issue their own report.

Later in the week, the panel will hear from former Trump campaign manager Corey Lewandowski.

White House Communications Director Hope Hicks, who served as Trump’s spokeswoman during his presidential campaign after a tenure with his Trump Organization real-estate business, is also expected to be questioned by the committee this week, according to a congressional source.