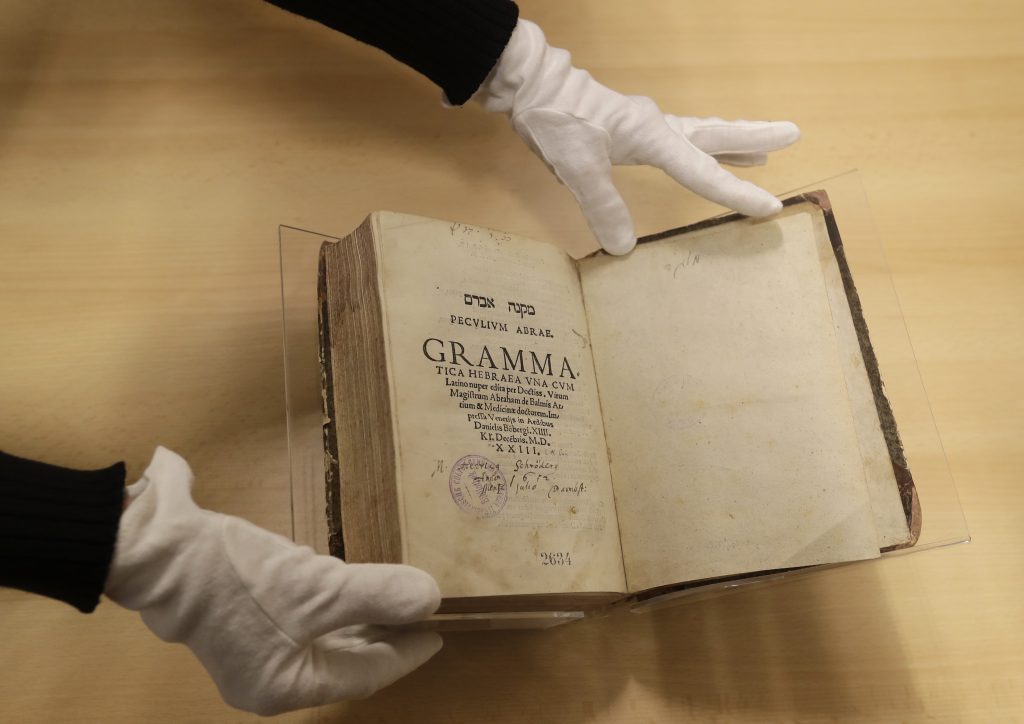 A 16th century book that belonged to Prague’s Jewish community before World War II and surfaced at a New York City auction last year was brought back to the Czech Republic on Tuesday.

Titled “Mikneh Avram – Peculium Abrae,” the recovered volume is a grammar book published in both Hebrew and Latin in 1523. It was written by Abraham ben Meir de Balmes, an Italian Jew, and published in Italy.

It belonged to the library of Prague’s Jewish community before the war, and it is not clear under what circumstances it disappeared.

“It’s an exceptional moment for us that such a rare book returns to Prague after such a long time,” Leo Pavlat, director of the Jewish Museum in Prague, the legal successor to the Czech capital’s pre-war Jewish community.

The book turned up last year at an auction organized by Kestenbaum & Company, a New York auction house that specializes in Judaica and rare books. The auction house withdrew it from the sale at the museum’s request.

Auction-house director Daniel Kestenbaum identified the book’s most recent owner as a scholar in Jerusalem who had agreed to let the museum have it. Kestenbaum brought the book to Prague and read a message from the scholar, who wanted to remain anonymous.

The scholar said he was willing to return the book because a refusal would be “an active continuity of those terrible thefts committed against Jewish property and cultural treasures perpetrated by the German Nazis.”

“I’m happy to grant my support to the course of historical justice,” the message said.

The previous owner was Ze’ev Ben-Haim, a leading linguist and former president of the Academy of the Hebrew Language. Ben-Haim was born in 1907 in the Austro-Hungarian Empire when it including the territory of the modern Czech Republic and moved to Palestine in 1933.

It is not clear how and when he acquired the book, but the scholar in Israel acquired it after Ben-Haim’s death in 2013.