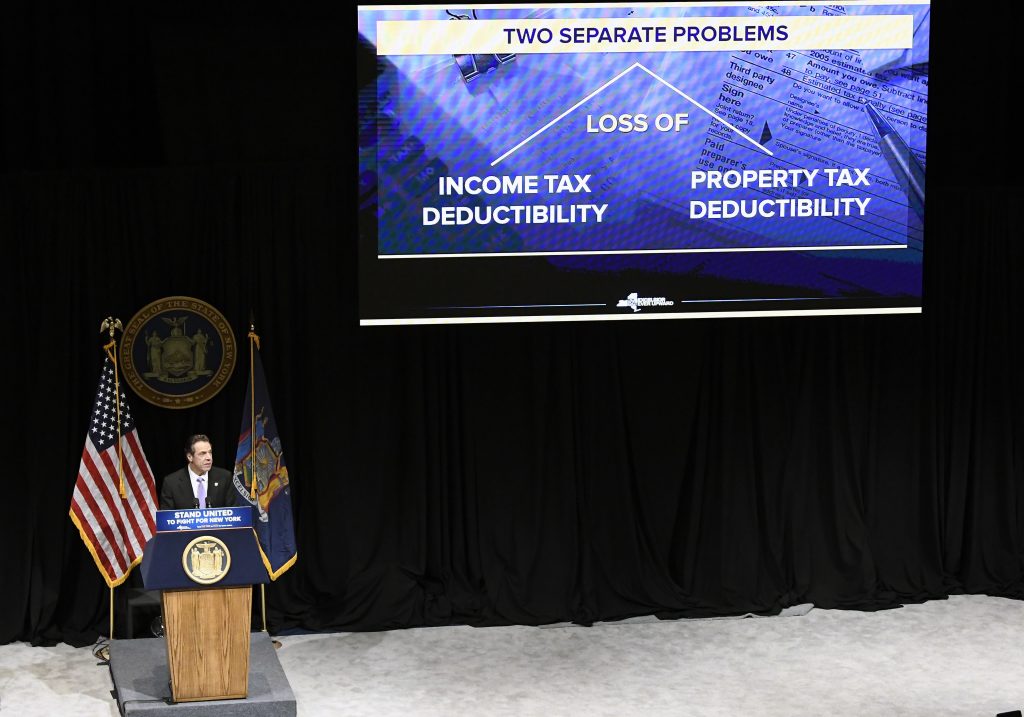 Gov. Andrew Cuomo vowed to fight Washington Republicans on Tuesday with a $168 billion state budget proposal that lays out spending on schools and mass transit while also confronting greater uncertainty in federal funding.

The Democrat said he’ll urge lawmakers to consider restructuring the state tax system to soften the blow of the new federal tax overhaul enacted by Republicans on wealthy New Yorkers. One idea is a new payroll tax which would largely replace the current income tax, an ambitious idea that already faces challenges with New York’s Republican lawmakers.

“We’re looking at all options,” he said, adding that a report from state tax officials on possible changes will be released Wednesday. “We don’t want to make a bad situation worse.”

The new federal tax code limits a deduction for state and local taxes to $10,000. The deduction had been especially popular in high-tax states like New York, where some homeowners now face large increases in their federal tax bills.

The spending proposal released by Gov. Cuomo on Tuesday contained few specifics about any tax changes, which would be worked out with lawmakers over the next few months. Lawmakers hope to approve a budget by April 1.

Gov. Cuomo’s proposal holds most spending flat in order to eliminate a $4.4 billion deficit. It increases education spending by $769 million and sets aside more than $400 million for work on New York City’s beleaguered subway and transit system. The Government also proposed a new surcharge on opioid prescriptions to fund efforts to fight addiction.

The details of the state’s final budget will be worked out in closed-door negotiations between Gov. Cuomo and top lawmakers. Republican legislators are taking a wait-and-see approach to his talk of tax changes. Republican leaders said that while they’d oppose new, higher taxes on New Yorkers or businesses in the state, they’re open to considering Cuomo’s plan if it can reduce some of the federal increases while keeping state taxes flat.

“We are always open to discussions,” said Republican Senate Leader John Flanagan of Long Island. “I’m going to take him at his word.”

Lawmakers also were skeptical about some of Cuomo’s other proposals. Republican Sen. Joe Griffo said he’s eager to learn more about Cuomo’s plan to impose a surcharge on prescription opioids.

“I want to make sure that in no way is that passed on to the consumer,” he said.

At one point in Cuomo’s speech a Democratic lawmaker, Assemblyman Charles Barron of Brooklyn, a former Black Panther, stood up and heckled the governor, criticizing him for not setting aside more money for public education. “Tax the millionaires!” he said. Cuomo told him to listen to his entire proposal before taking issue with it, and noted that state education spending is at a record high.