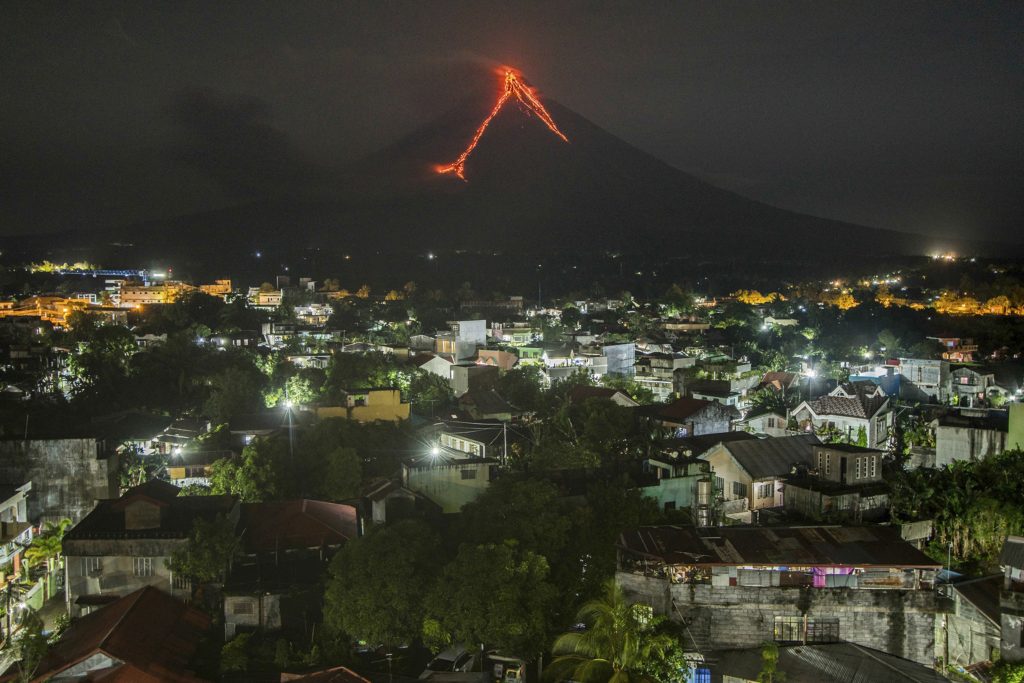 Glowing red lava spurted in a fountain and flowed down the Philippines’ most active volcano on Tuesday in a stunning display of its fury that has sent more than 21,000 villagers fleeing to safety and prompted police to set up checkpoints to stop tourists from getting too close.
The Philippine Institute of Volcanology and Seismology said the lava flowed as much as 1.2 miles from the often cloud-shrouded crater of Mount Mayon, while ash fell on several villages in northeastern Albay Province.

At least 21,800 people have been displaced by Mayon’s eruption since the weekend, including more than 16,800 villagers who took shelter in 22 schools. Others took refuge in the homes of relatives.

“We have witnessed lava fountaining yesterday, that’s why we have additional families who evacuated due to the threat,” said Romina Marasigan, spokeswoman of the government’s main disaster-response agency.

Renato Solidum, who heads the volcanology institute, said the flows cascading down the volcano were not generated by an explosion from the crater with superheated lava, molten rocks and steam, but were caused by lava fragments breaking off from the lava flow and crashing onto the lower slopes.

Scientists have not yet detected enough volcanic earthquakes of the type that would prompt them to raise the alert level to four on a scale of five, which would indicate an explosive eruption may be imminent, Solidum said. Emergency response officials previously said they may have to undertake forced evacuations if the alert is raised to four.

In 2013 an ash eruption killed five climbers who had ventured near the summit despite warnings. Mayon’s first recorded eruption was in 1616 and the most destructive, in 1814, killed 1,200 people and buried the town of Cagsawa in volcanic mud.

The Philippines lie in the so-called “Ring of Fire,” a line of seismic faults surrounding the Pacific Ocean where earthquakes and volcanic activity are common. In 1991 Mount Pinatubo in the northern Philippines exploded in one of the biggest volcanic eruptions of the 20th century, killing about 800 people.