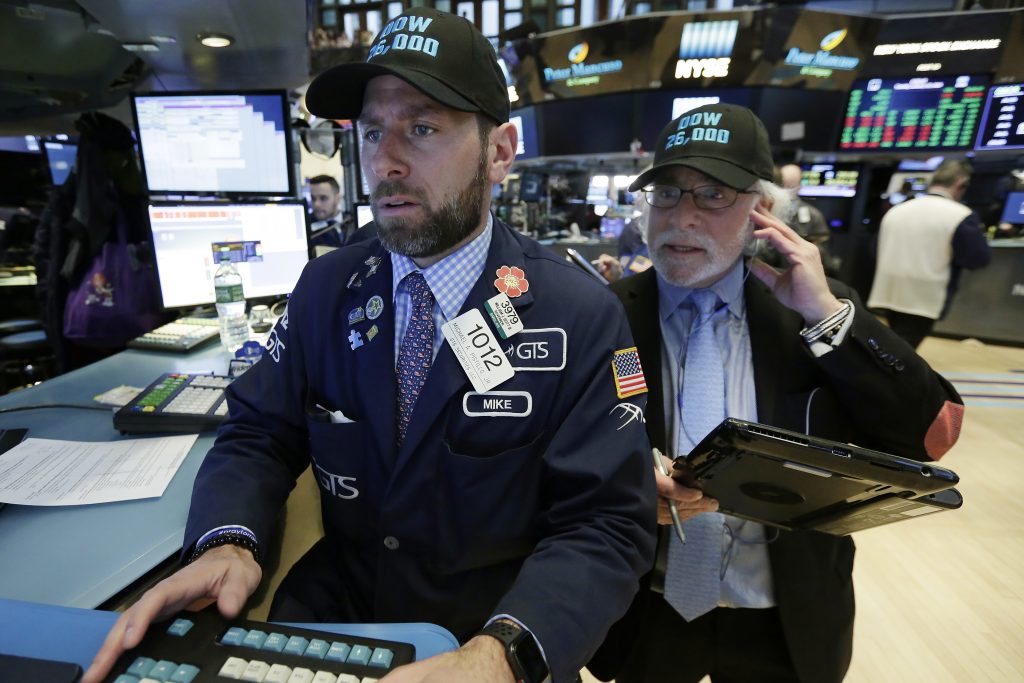 THE QUOTE: “We are in the early stages of the earnings season,” said Lindsey Bell, investment strategist at CFRA Research. “We got some good numbers from UnitedHealth and Citigroup, especially, and that’s benefiting the financials and health care sectors today.”

EARNINGS WATCH: Investors were watching for the impact of Washington’s latest tax changes on U.S. companies as earnings season for the final quarter of 2017 gets into full swing. Many multinational corporations are taking one-off charges for bringing home money held abroad. But investors expect them to benefit in the long run from the decision to cut the standard tax rate from 35 percent to 21 percent and are bidding up their share prices.

FEELING CHIPPER: Technology stocks accounted for some of the biggest gains Tuesday, with several chipmakers moving sharply higher. Qualcomm led the pack, rising $2.89, or 4.4 percent, to $68.27.

BIG CHARGE: Citigroup rose 0.6 percent after the bank reported an $18.3 billion loss for the fourth quarter due to the new tax law. Excluding the one-time charges, Citigroup earned a profit. The stock was up 45 cents to $77.30.

HEALTHY QUARTER: UnitedHealth Group gained 2.4 percent after its said earnings more than doubled in the final quarter of 2017. The nation’s largest insurer also hiked its forecast well beyond expectations, largely due to help from the federal tax overhaul. The stock picked up $5.45 to $234.09.

IN GEAR: General Motors rose 2 percent after the automaker said it expects strong sales in North America and China will sustain its profit through the rest of this year. GM also said it will take a $7 billion write-down in 2017 tied to the U.S. tax overhaul. Its shares added 86 cents to $44.93.

HIGH-VOLTAGE BUYOUT: Energizer Holdings surged 13.6 percent after the company said it will acquire the battery and lighting assets of Spectrum Brands, which includes the Varta and Rayovac battery brands. Energizer shares added $7.03 to $58.65. Spectrum gained $3.06, or 2.5 percent, to $123.54.

DEAL OR NO DEAL: Viacom slid 6.5 percent after following several reports saying the media company is not in talks to merge with CBS Corp. The tumble follows a sharp jump in Viacom shares Friday after a published report suggested that a merger might be a possibility. Viacom fell $2.18 to $31.58. CBS rose $1.04, or 1.8 percent, to $59.87.

The slide in oil prices weighed on energy sector stocks. Range Resources was down 71 cents, or 4 percent, to $16.87.

THE BITCOIN TRADE: The price of bitcoin was down 17 percent to $11,301, according to the tracking site CoinDesk. Bitcoin futures on the Cboe Futures Exchange were down 19 percent to $11,280. The futures allow investors to make bets on the future price of bitcoin. The price of the digital currency, which soared last year after starting 2017 under $1,000, has been hurt amid signs of potentially increased scrutiny from governments. South Korea’s top financial policymaker said Tuesday that banning trading in digital currencies was an option, adding such a move still needed to be reviewed by government ministries.