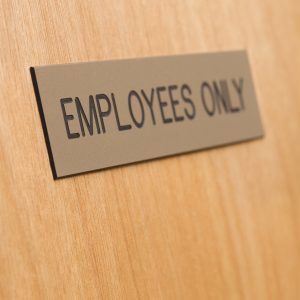 A bill known as the “Crohn’s and Colitis Fairness Act” will soon become law following a pledge of support from Governor Andrew Cuomo. The legislation was introduced by Senator Kemp Hannon (R- Long Island) and was co-sponsored by Senator Simcha Felder (D-Brooklyn), among others.

The bill allows access to employee-only restrooms by individuals with Crohn’s disease, colitis, and other similar conditions, in any business open to the public, during business hours.

“This important legislation will lend dignity to the many people diagnosed with these common, but often debilitating, conditions,” said Senator Felder. “People with Crohn’s and colitis show daily strength in dealing with a condition that could easily bring someone down. Now, no one will have to worry about being turned away in his or her time of need. Coping with any health condition is difficult enough. I am gratified that we could do something to help make life a little easier.”

The bill’s sponsors note that Crohn’s and colitis “significantly affect health and quality of life.” A press release from Senator Felder’s office notes that while the conditions addressed by the law affect some 1.6 million Americans, research has shown the incidence to be far higher among Ashkenazi Jews.

Yoel Drummer, founder and executive director of the Jewish Crohn’s and Colitis Support Group, was a driving force behind the bill’s passage.

“Only a few years ago, the topic of Crohn’s and colitis was taboo. Nobody talked about it and people who were diagnosed felt like they suffered alone,” he said. “Today, thanks to a lot of outreach and advocacy, things have changed drastically and members of our support group number in the thousands, but there is still a lot to be done.”

Three years ago, Mr. Drummer, working together with the national Crohn’s and Colitis Foundation, began to actively pursue legislative sponsors for the bill. After approaching a few state senators and hitting several roadblocks, he saw that his best shot would be to approach Senator Kemp Hannon, who chairs the Senate’s Health Committee.

“I went without an appointment and had a long meeting with his legislative assistant… They had some concerns which I did my best to address and, within a few days, we heard back that Senator Hannon was planning to sponsor the bill,” he told Hamodia.

The bill was held up by several technical obstacles in Albany, but in recent months was passed overwhelmingly by both the Senate and Assembly. Governor Cuomo has said that he is dedicated to seeing the bill become law, pending the resolution of certain technicalities which are presently being addressed by advocates and sponsors.

An askan from Monsey, who has been living with both Crohn’s and colitis for nearly 20 years, but, like many others with the conditions, manages to live a fully active life, told Hamodia that the new law was “exciting news.”

“I can personally testify as to the importance of this bill,” he said. “It will bring dignity and potentially less suffering for those who are going through this lifelong disease.”

The law does permit business owners to ask those requesting access to employee facilities to present “reasonable evidence” that they suffer from one of the relevant illnesses.

The askan added that while those with Crohn’s and colitis do not presently carry any identification listing their conditions, “If adding it to the NYS ID card would help even one patient, it might be worth it.”