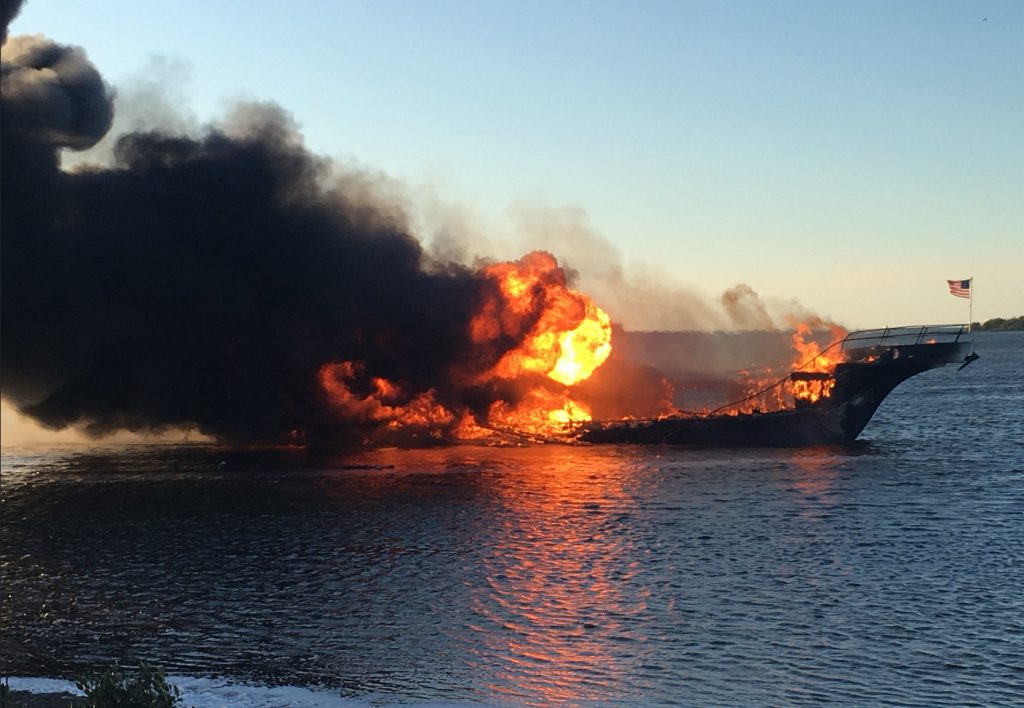 A casino company said Monday it never had a problem with the shuttle boat that erupted in flames off Florida’s Gulf Coast, leading to the death of a female passenger.

Tropical Breeze Casino spokeswoman Beth Fifer said the company does not know what caused Sunday’s blaze, which gutted the shuttle boat and forced about 50 passengers to jump into the chilly waters off Port Richey.

“We are deeply saddened for the loss of our passenger, the 14 injured and anyone else who was affected by this tragedy,” Fifer said.

Regional Medical Center Bayonet Point spokesman Kurt Conover said Monday that the passenger arrived at the hospital’s emergency room at 10 p.m. Sunday and died shortly afterward. He said she had apparently gone home after the fire but became ill.

Pasco County Sheriff’s Office spokesman Kevin Doll said the victim was 42. Her name has not been released and a cause of death has not been determined. Conover said eight other passengers were treated at the hospital and released.

Coast Guard Petty Officer 1st Class Michael De Nyse said investigators will determine the cause of the fire and examine the history of the boat and Tropical Breeze Casino.

Helicopter video taken by WTSP-TV early Monday shows the boat was burned down to its hull, with only an American flag on its bow uncharred.

The shuttle boat regularly carries people back and forth from the Tropical Breeze’s offshore casino, about a 45-minute ride into international waters.

Officials said the shuttle vessel was headed out to the casino ship at the time of the fire.

Port Richey Police Chief Gerard DeCanio said the shuttle boat experienced engine problems after leaving the dock at Port Richey, a suburban community about 35 miles northwest of Tampa. But as the vessel turned back, flames kicked up and people began jumping overboard into shallow water, according to witness accounts.

Larry Santangelo, 57, said he had just driven into his neighborhood when he saw smoke and fire and thought a house — possibly his own — was ablaze. But then he realized it was the boat just about 100 yards offshore.

He told the Tampa Bay Times that he then saw people wandering about confused, wet and cold, after they reached land. One woman collapsed upon reaching shore and vomited, he said. Santangelo said he took about 30 of the passengers into his garage to warm up and recover.

“It was so windy and they were soaking wet,” said Santangelo. He worried that some might suffer from hypothermia.

It wasn’t immediately clear what caused the fire, which sent a huge plume of dark black smoke wafting over sunny skies on an unusually chilly winter day in the Tampa Bay region.

Another witness told the Tampa Bay Times the shuttle boat passes regularly by his family’s home, carrying patrons to and from a casino ship offshore. But he knew something was wrong when smoke cut across the sunny Florida skies and he heard shouts and screams.

“They didn’t have much time to decide whether or not to jump,” said Bakr Jandali, 19, who was with his family at home nearby when they heard the commotion. “The fire was moving fast. It was a hard jump.”

Jandali said passengers had to leap about 12 feet and wade through somewhat shallow water. He said passengers waded in waist-deep water before reaching land. Residents then offered them towels, socks and water to drink.

“All of us, my family and the neighbors, brought them towels and water,” Jandali said. “They were so cold.”

News footage at the site showed survivors cloaked in blankets trying to warm themselves after getting to shore.