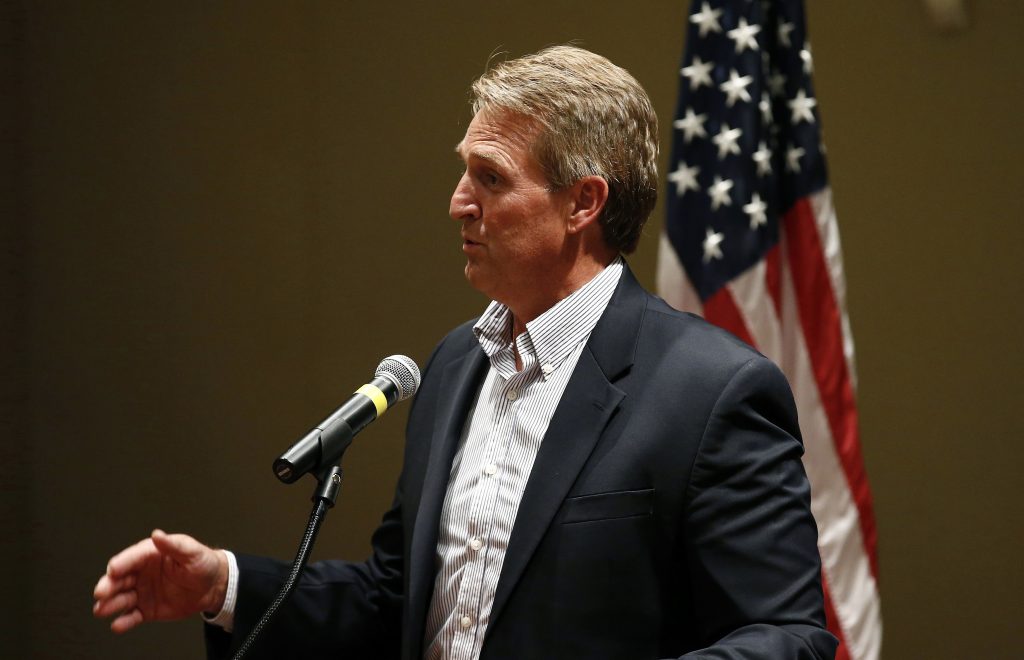 Sen. Jeff Flake, R-Ariz., plans to give a speech in the coming days that compares President Donald Trump’s public criticism of the news media to similar comments once made by Soviet dictator Joseph Stalin.

A spokesman said that Flake, who will retire after this year amid intense political pressure sparked by his criticism of the president, plans to deliver the speech Wednesday before Trump announces the winners of his self-described “fake news” awards.

Trump announced via Twitter that he would be handing out awards Wednesday to news outlets he thought unfairly covered him.

Flake continues to be one of Trump’s most frequent critics, often speaking out to warn that the president’s words and actions could be detrimental to the future of the Republican Party and the nation’s standing worldwide.

In recent days, he was among the lawmakers who denounced Trump for describing certain African nations and Haiti in a vulgar term during an Oval Office meeting on immigration policy. Flake has been negotiating a bipartisan deal on immigration with Sens. Dick Durbin, D-Ill., and Lindsey Graham, R-S.C. In an interview with The Washington Post on Friday, Flake said that he was not at the meeting, but heard about Trump’s comment “before it went public. And what I’ve heard reported is consistent about what I heard about the meeting.”

“I’m not surprised at the sentiment expressed – it’s consistent with what he’s said – but that he would do that knowing the fury it would cause,” Flake added.

Flake plans to use his upcoming speech to denounce Trump for calling the news media “the enemy of the American people” last year.

In excerpts provided by his office, he is poised to blast Trump’s “unrelenting daily assault on the constitutionally-protected free press” that he will call “as unprecedented as it is unwarranted.”

“It is a testament to the condition of our democracy that our own president uses words infamously spoken by Josef Stalin to describe his enemies,” Flake will say, according to the excerpts. “It bears noting that so fraught with malice was the phrase ‘enemy of the people,’ that even Nikita Khrushchev forbade its use, telling the Soviet Communist Party that the phrase had been introduced by Stalin for the purpose of ‘annihilating such individuals’ who disagreed with the supreme leader.”

Flake will add that Trump “has it precisely backward – despotism is the enemy of the people. The free press is the despot’s enemy, which makes the free press the guardian of democracy. When a figure in power reflexively calls any press that doesn’t suit him ‘fake news,’ it is that person who should be the figure of suspicion, not the press.”

On MSNBC Sunday night, Flake said that in addition to Stalin, Mao Zedong, the former leader of the Chinese Communist Party, also referred to the media as “enemy of the people.” And he repeated his point that Khrushchev later forbade the use of the term.

“I don’t think that we should be using a phrase that’s been rejected as too loaded by a Soviet dictator,” Flake said.

Flake was elected to the Senate in 2012 and announced last year that he would not seek a second term this November. The Republican contest to succeed him now includes former Maricopa County sheriff Joe Arpaio, Rep. Martha McSally and former state senator Kelli Ward. The winner is expected to face Democratic Rep. Kyrsten Sinema in the general election.

Flake has declined to endorse a potential successor.