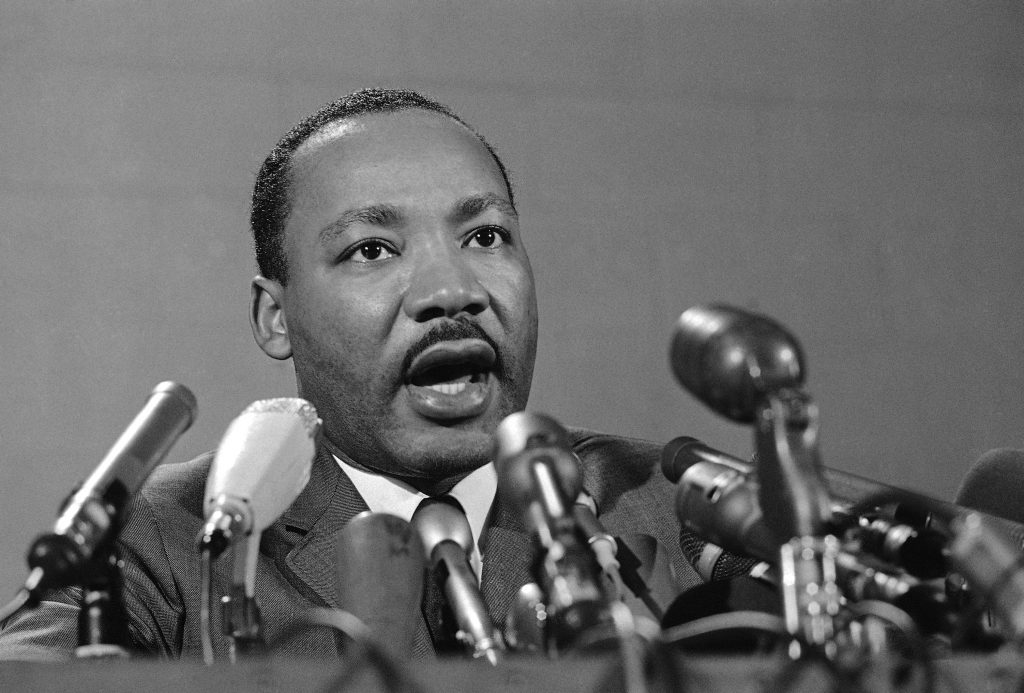 Leaders of the Cherokee Nation marked Martin Luther King Jr. Day by welcoming the descendants of slaves into their tribe after years of exclusion, while King’s children and the pastor of an Atlanta church where King preached passionately decried disparaging remarks President Donald J. Trump is said to have made about African countries.

At gatherings across the nation, activists, residents and teachers honored the late civil rights leader on what would have been his 89th birthday and ahead of the 50th anniversary of King’s assassination in Memphis, Tennessee.

Pres. Trump dedicated his weekly radio address to King. Pres. Trump said in the address that King’s dream of a colorblind society is the American Dream, and offers dignity and hope to every American, regardless of color or creed.

Pres. Trump spent Monday’s King federal holiday in Florida with no public appearances on his official schedule, but he tweeted the radio and video address to his followers.

But King’s eldest son criticized Pres. Trump, saying, “When a president insists that our nation needs more citizens from white states like Norway, I don’t even think we need to spend any time even talking about what it says and what it is.”

He added, “We got to find a way to work on this man’s heart.”

In Atlanta, the pastor of the Ebenezer Baptist Church, the Rev. Raphael Warnock, urged those who packed the pews to honor King to speak out against racism. Warnock also took issue with Pres. Trump’s campaign slogan to “Make America Great Again.”

Warnock said he thinks America “is already great … in large measure because of Africa and African people.”

He urged people in the audience to speak out against such remarks about other countries, noting King’s own words that “silence is betrayal.”

King’s daughter, the Rev. Bernice King, keynote speaker at the Atlanta service, also criticized Pres. Trump, remarking, “We cannot allow the nations of the world to embrace the words that come from our president as a reflection of the true spirit of America.”

“We are one people, one nation, one blood, one destiny. … All of civilization and humanity originated from the soils of Africa,” Bernice King said. “Our collective voice in this hour must always be louder than the one who sometimes does not reflect the legacy of my father.”

The day took on renewed meaning for descendants of black slaves owned by the Cherokee Nation but whose tribal citizenship was in flux until recently, despite a treaty guaranteeing rights equal to native Cherokees.

The tribe— one of the country’s largest — is recognizing the King holiday for the first time this year with calls to service and speeches in which the tribe plans to confront its past. King’s writings spoke of injustices against Native Americans and colonization, but Cherokee Secretary of State Chuck Hoskin Jr. said the tribe had its own form of internal oppression and dispossession.

Such talk from tribal officials would have been surprising before a federal court ruled last year that the descendants of former slaves, known as freedmen, had the same rights to tribal citizenship, voting, health care and housing as blood-line Cherokees.

One descendant of freedmen, Rodslen Brown-King, said her mother was able to vote as a Cherokee for the first and only time recently. Other relatives died before getting the benefits that come with tribal citizenship, including a 34-year-old nephew with stomach cancer, she said.

“He was waiting on this decision,” said Brown-King, of Fort Gibson, Oklahoma. “It’s just a lot of struggle, a lot of up-and-down trauma in our lives. It’s exciting to know we are coming together and moving forward in this.”

Derrick Reed, a city councilman in Muskogee, Oklahoma, and director of the Dr. Martin Luther King Jr. Community Center there, said Monday’s events were the first attended by the Cherokee Nation in honor of the holiday. Principal Chief Bill John Baker was scheduled to speak at an after-party the tribe is sponsoring, and Hoskin served breakfast earlier in the day.

“All the freedmen are finally relieved to be recognized, and their story itself has been a civil rights struggle,” Reed said. “It’s definitely a turning point in the history of the relationship with the freedmen Indians as well as the message the tribe is sending to the nation.”