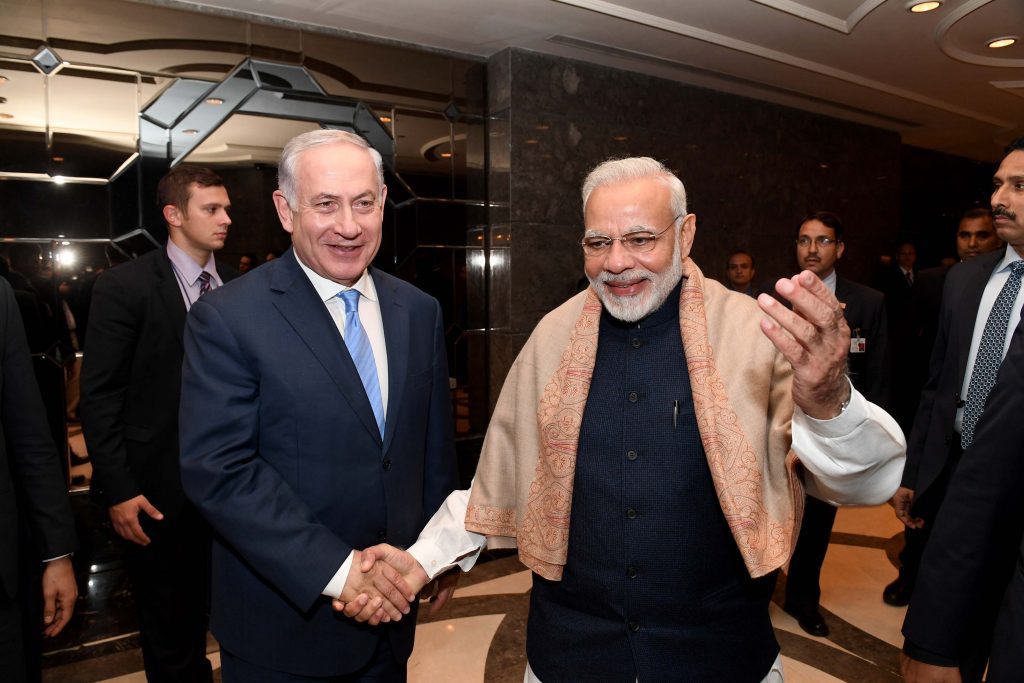 On the first full day of Prime Minister Binyamin Netanyahu’s visit there, India and Israel signed no fewer than nine agreements, mostly memoranda of understanding between the two countries on a wide range of areas in education, technology, transportation, and more.

Among the agreements were a Memorandum of Understanding (MoU) on Cyber Security Cooperation between India and Israel; an MoU between the Indian Ministry of Petroleum and Natural Gas and the Israeli Ministry of Energy on Cooperation in the Oil and Gas Sector; changes to the air travel agreement the two countries that will see more flights between both destinations; an agreement to enhance and encourage media productions between Israeli and Indian entertainment firms; an MoU between Indian health agencies and Yerushalayim’s Shaare Zedek Medical Center on Cooperation in the field of Research in Homeopathic Medicine; an MoU between the Indian Institute of Space Science and Technology (IIST) and the Technion-Israel Institute of Technology for cooperation in the field of space; MoUs encouraging mutual investments in each country; a Letter of Intent between between Indian Oil Company (IOCL) and Israel’s Phinergy Ltd. For cooperation in the area of metal-air batteries for use in vehicles; and a letter of Intent between IOCL and Yeda Research and Development Co Ltd for cooperation in the area of concentrated solar thermal technologies.

In addition, India and Israel have agreed to enhance cooperation in the areas of agriculture, science and technology and security, Prime Minister Narendra Modi said. “We will strengthen the existing pillars of cooperation in areas that touch the lives of our peoples,” Modi told reporters in joint press conference with Netanyahu Monday night. “We exchanged views on scaling up the Centers of Excellence that have been a mainstay of agricultural cooperation,” Modi said, adding that “our discussions today were marked by convergence to accelerate our engagement and to scale up our partnership.”

Speaking to Israeli reporters, Netanyahu spoke in Hebrew about the now-infamous “curse speech” made by Palestinian Authority chief Mahmoud Abbas Sunday night. With the speech, Abbas “has revealed the true roots of the conflict – his opposition to the basis of a Jewish state altogether. We have to stop and listen to what he says. The root of the conflict is his refusal to accept Israel’s existence. This speech serves our diplomatic needs more than anything we could possibly do ourselves,” Netanyahu said.

In the speech, Abbas lashed out at the Americans and Europeans “for bringing the Jews here from Europe in order to protect Europe’s interests in the region. They asked Holland, which had the biggest sailing fleet in the world, to bring the Jews here.” Regarding the Balfour Declaration, Abbas said that “Israel is a colonial project that has nothing to do with the Jews.”

Among other things, Abbas laid a traditional Arab curse on U.S. President Donald Trump, wishing that “his house and descendants be destroyed.” Footage of the even shows Abbas using the term, although the official transcript of the speech published by the PA eliminates that comment.