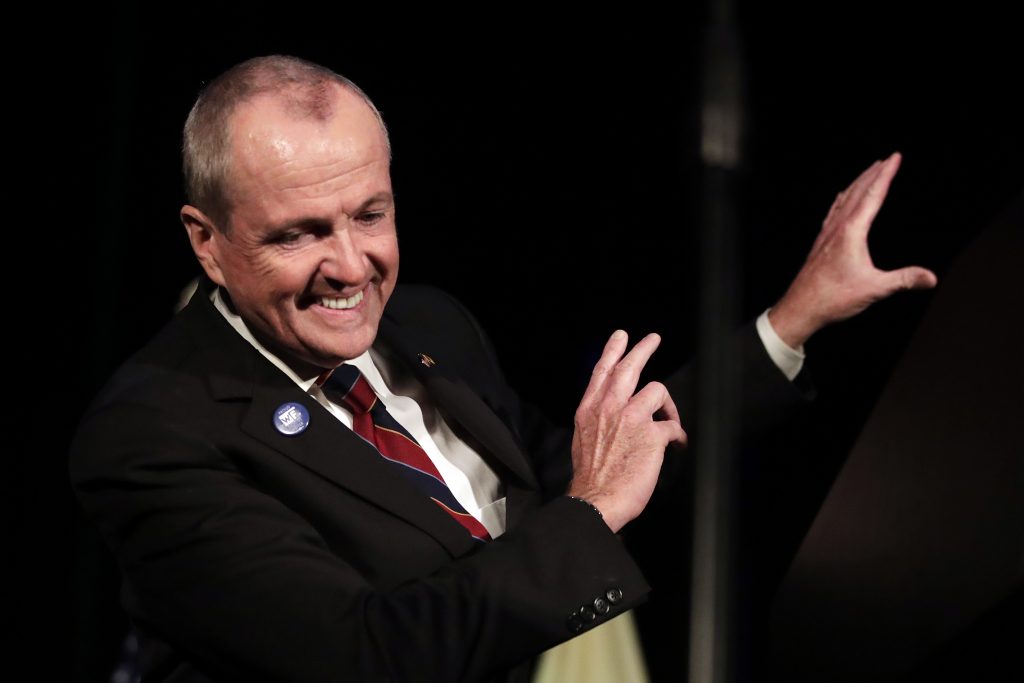 Phil Murphy, a former Goldman Sachs financier and ambassador to Germany, had a relatively smooth path to the governor’s office. Outgoing Gov. Chris Christie, R, was deeply unpopular and New Jersey’s Democratic establishment rallied around Murphy, who spent $20 million of his own money to win the June primary. In November, while Virginia’s statewide races became a referendum on President Donald Trump’s administration, Murphy’s 14-point victory was a national afterthought.

Murphy is ready to end his obscurity. On Tuesday, when he is sworn in, New Jersey will become one of just eight states where Democrats run every branch of government. If Murphy has his way, New Jersey will become a proving ground for every liberal policy idea coming into fashion, from legalized illegal substances to a $15 minimum wage, from a “millionaire’s tax” to a virtual bill of rights for undocumented immigrants.

Undergirding all of it: automatic voter registration, early voting and the right to register with a political party as late as Election Day.

Murphy’s moves could resonate in other states. Republicans, who control 33 governor’s mansions, are defending 26 of them in this year’s midterm elections. The prospect of New Jersey shifting to the left, smack in the middle of the nation’s largest media market, strikes Republicans as an opportunity to warn voters in swing states of what could happen if Democrats take power.

“Residents are leaving high-tax blue states in a mass exodus and taking billions of their dollars with them,” said Jon Thompson, a spokesperson for the Republican Governors Association. “If Phil Murphy and other Democrat governors embrace the toxic [Connecticut Governor] Dan Malloy model of an anti-business, tax-and-spend agenda, their states will soon serve as a lesson in fiscal failure and Republicans will continue to dominate control in the states.”

Murphy is raring to prove that wrong.

“Somebody said to me at one point, ‘Hey, how come you haven’t moved to the middle since you won the primary?’ ” Murphy said. “I said, ‘Let me tell you the secret: I believed what I said in the primary.’ ”

No one believes Murphy will get his way on everything. He will take office in the middle of several fights with the Trump administration. Like Murphy, Christie opposed the Republican tax overhaul for its effect on New Jersey residents’ ability to deduct state and local taxes on their federal returns, then opposed the administration for allowing offshore drilling and carving out a special exception for Florida.

Christie endorsed Pres.Trump for president; Murphy compared Pres. Trump’s rise to the ascent of Adolf Hitler. Asked how he would negotiate with the administration where Christie could not, Murphy said “it would be great if Governor Christie, if he’s got that relationship, to use it,” and if the impasse continues, he is ready.

“We’re going to stand our ground on anything we find unacceptable, and unfortunately that list is long, whether it’s immigration policy, it’s offshore drilling, or it’s an awful tax plan,” Murphy said. “We’re not going to compromise on American values and our constitution over here” – he spread out his arms – “just to get a deal over here. That won’t happen.”

Murphy will face a different kind of resistance from his fellow Democrats, who easily held their majorities in November – albeit with leaders more conservative than the new governor. State Senate President Steve Sweeney and incoming state House Speaker Craig Coughlin have called themselves “fiscal conservatives.” Sweeney, who said in November that a “millionaire’s tax” was doable, said after the passage of the GOP-backed tax bill last month that it might need rethinking.

“I don’t blame people for having sticker shock in reaction to the federal tax plan,” Murphy said. “We still think that millionaire’s tax makes sense, particularly given the very wealthy among us will do the best, almost by any definition, based on this tax plan.”

In the short term, Murphy endorses an idea popular in blue states with high taxes – allowing taxpayers to write off their state taxes as charitable deductions. Before taking office, he has been working with towns and cities to create charitable organizations for that purpose. “It’s not clear that you actually need laws passed for towns to do it,” he said.

None of it, Murphy said, will impede the agenda that he ran on. Eight years earlier, Christie took power at the height of the Great Recession; the budget crunch set him up for years of confrontations with labor unions; his first budget proposed an $820 million cut in funds to school districts and 1,300 state worker layoffs, and kicked off a battle over the state’s contribution to public pensions.

“I think what I did here in 2010 gave [Wisconsin Gov.] Scott Walker permission to do what he did in 2011, and gave him the political courage to do what he did,” Christie told the New York Times this month.

Murphy, inheriting a stronger economy, wants to create a new model – a “fair” state, where the rich pay more and the poor have less far to fall.

“How do you jack up the number of incubators? How do you get venture money to be jazzed about this state?” Murphy said. “How do you make sure millennials find the communities they want to live in and use public transportation? How do you make sure the public schools remain some of the best in the country? We’re the most diverse state in the nation – that’s a huge leg up in that economy.”

He praised California and Minnesota, two states that got through the recession by raising taxes instead of cutting services, as his models.

“We are America’s number one turnaround story; that’s how I think about this,” Murphy said. “Eight years ago, that story was California. A state is below par, and new leadership is coming in to turn that around.”

One of the first “turnaround” priorities is equal-pay legislation, as Murphy has been saying, along with paid sick leave.

Murphy ran on legalization, and on making New Jersey a “sanctuary state.” Saying so had hurt him politically; polls that had Murphy winning by a landslide tightened in late October, as Republicans warned that “sanctuary” status would make the state a haven for crime. Some Democrats, facing tighter races, distanced themselves from Murphy.

This week, Murphy conceded that “sanctuary” was a “buzzword” that probably did more to confuse than enlighten. He preferred a new word – “welcoming” – for more or less the same policy of making it easy for undocumented immigrants to live in the state. That would mean state IDs, driver’s licenses and eligibility for college financial aid – “not just in-state tuition.”

It would also mean an Office of Immigrant Defensive Protection, which, if Murphy has his way, would become a government agency that undocumented immigrants could trust.

“It would be a place where everybody could call with questions about their status,” Murphy said. “Our guess is it’s going to be legal-services-oriented. One remarkable thing, and you probably have seen this, the rumors that swirl around communities are extraordinary, and it’s literally hard to get, particularly if you’re undocumented, the right answer to your question. That’s when people go back into the shadows.”

Some of the policies might be stymied. There is not, right now, a suggestion of a full-bore legislative battle such as the one Walker began when he attacked Wisconsin’s budget deficit by curtailing unions. Murphy wanted to prove that all of this worked, in tandem.

“This state, under the current leadership, has gotten into the belief that if I give something to you, it comes at my expense,” Murphy said. “That’s a myth. Raising the minimum wage does not take from growth, it adds to growth. Earned sick leave gives workers a lot more confidence and adds to their participation in the economy. Equal pay for equal work isn’t, ‘Here, I’ll give this to you.’ It’s confidence, it’s participation.”

Murphy rejected the idea that he, like Christie, will ramp up his media profile. At the end of the interview, standing up in the sneakers he wore when he danced onto the stage on election night, he suggested that national politics will take care of itself.

“This state used to be a progressive beacon,” he said. “In many respects, that soul has been ripped out of us. We can put it back.”