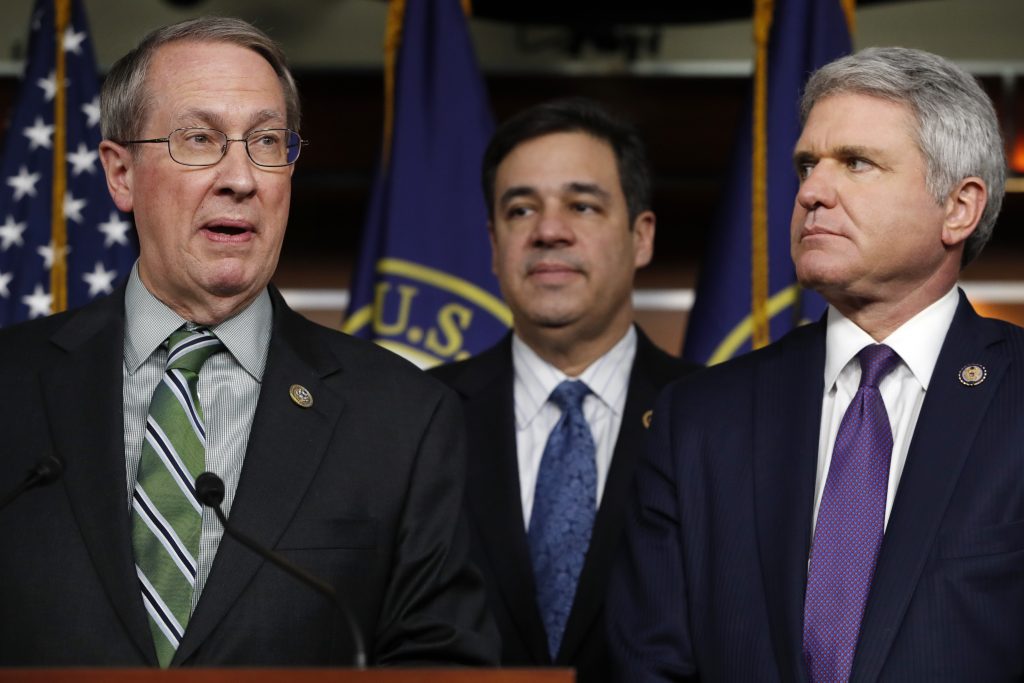 Republican lawmakers held out hope that a deal can be reached allowing young undocumented immigrants to remain in the U.S., despite President Donald Trump saying the effort is “probably dead” amid growing tensions about keeping the government funded past Friday.

Pres. Trump told reporters on his way to a dinner Sunday evening that “I don’t know if there is going to be a shutdown” at the end of the week.

Heading to dinner at his Palm Beach, Fla., golf club with House Majority Leader Kevin McCarthy, R-Calif., Pres. Trump said that on immigration “we have a lot of sticking points but they are all Democrat sticking points,” adding, “they don’t want security at the border.”

Pres. Trump escalated his rhetoric on immigration in a pair of early-morning Sunday Twitter messages that appeared to move further away from what just a few days ago seemed to be a potential deal with Democrats and moderate Republicans on legislation to continue the Deferred Action for Childhood Arrivals program.

“DACA is probably dead because the Democrats don’t really want it, they just want to talk and take desperately needed money away from our Military,” Pres. Trump tweeted.

“I, as President, want people coming into our Country who are going to help us become strong and great again, people coming in through a system based on MERIT. No more Lotteries!” Pres. Trump said. His comments followed four tweets on the same topic on Saturday.

The immigration debate involving young undocumented immigrants brought to the country as children and Pres. Trump’s demand for funding to build a wall on the southern U.S. border is playing out days before a potential government shutdown as soon as the end of this week. Democrats are demanding that deportation protections for 800,000 young immigrants be included in any extension of government spending, with a Jan. 19 shutdown deadline looming.

Shortly after Pres. Trump’s tweets, he was contradicted by key Senate Republicans and even his own Homeland Security Secretary, Kirstjen Nielsen, who said on Fox News that there’s still hope for a solution if Democrats would agree to close immigration loopholes.

“I do not believe DACA is dead,” Nielsen said. She said the Trump administration and congressional Republicans want “a security-immigration deal.” She also said it would be “completely irresponsible” for Democrats to demand that a deal be tied to keeping the government funded.

Sen. David Perdue, R-Ga., also expressed optimism on ABC about finding a fix for DACA, but only if “the Democrats get serious about negotiating” on securing U.S. borders and family reunification or “chain migration.”

Sen. Jeff Flake of Arizona, also a Republican, said senators from both parties support a proposed compromise on legislation that he has helped write.

“We’re working now to add more Republicans to that list, and we will have more this coming week,” Flake said on ABC. He said his bill was the only way to get the 60 votes required for passage in the Senate.

Flake also rejected the president’s claim that “Democrats don’t really want” a deal. “I’ve been negotiating and working with the Democrats on immigration for 17 years,” he said. “The Democrats are negotiating in good faith.”

The immigration debate is taking place against a backdrop of controversy after Pres. Trump reportedly used a vulgar term in referring to Haiti, El Salvador and African nations, during an Oval Office meeting with senators regarding an immigration deal. Pres. Trump denied making the comment in a Twitter posting on Friday, although the White House didn’t dispute the quotations after they were widely reported on Thursday. Sen. Dick Durbin of Illinois, the second-ranking Democrat, said the denial was “not true.”

Perdue attended the meeting and called the comments as reported “a gross misrepresentation.” “He did not use that word,” said Perdue, a top ally of Pres. Trump. Nielsen was also in the meeting but said she didn’t recall that specific phrase being used.

Republican Sen. Tom Cotton of Arkansas also said on CBS that he didn’t hear Pres. Trump use the word in the meeting, and that Durbin “has misrepresented what happened in White House meetings before.”

Back in his home state of Illinois on Monday, Durbin said he stands by his claim, and he called on the White House to release an audiotape it might have of the meeting. “I know what happened,” Durbin told reporters. “I stand behind every word that I said.”

Senate Democratic Leader Chuck Schumer said on Twitter that to impugn Durbin’s integrity was “disgraceful,” and that “whether you agree with him on the issues or not, he is one of the most honorable members of the Senate.”

Flake said he was in a meeting immediately following the one in which the president made the alleged comments, with some of the same participants. “They said those words were used before those words went public,” Flake said.

Asked on CNN whether Pres. Trump’s comments were racist, Republican Rep. Mia Love of Utah, a child of Haitian immigrants, paused and said, “Yes.” She also said, “I can’t defend the indefensible.”

But Love, who’s called on Pres. Trump to apologize, said the episode can’t derail efforts to address DACA and leave families in limbo.

“The worst thing that can happen right now is for there not to be a fix at all,” Love said . “We need to make sure that both sides aren’t using this for political gain and we do our job and fix this issue.”

Less than a week ago, Pres. Trump said during a broadcast, bipartisan meeting with lawmakers that he wanted a “bill of love” on immigration. He appeared to endorse a “clean DACA” bill sought by Democrats.

Since then, a hard-right flank of the Republican Party, led by White House senior adviser Stephen Miller and Cotton, pulled the president back from the center.

Even so, 70 percent of Americans favor continuing DACA, including a slim majority of Pres. Trump’s backers, according to a CBS News/YouGov poll released Sunday. In follow-up polling, 76 percent said pres. Trump’s comments on U.S. immigration from Africa and Haiti were inappropriate.

Republican Sen. Cory Gardner of Colorado said he still thinks a deal can be struck. While some members of both parties may want to continue fighting, “that’s not where a lot of the Democrats that I’ve been working with are, that’s not where the Republicans that I’ve been working with are. Where we are is trying to find a real solution,” Gardner said on CBS.