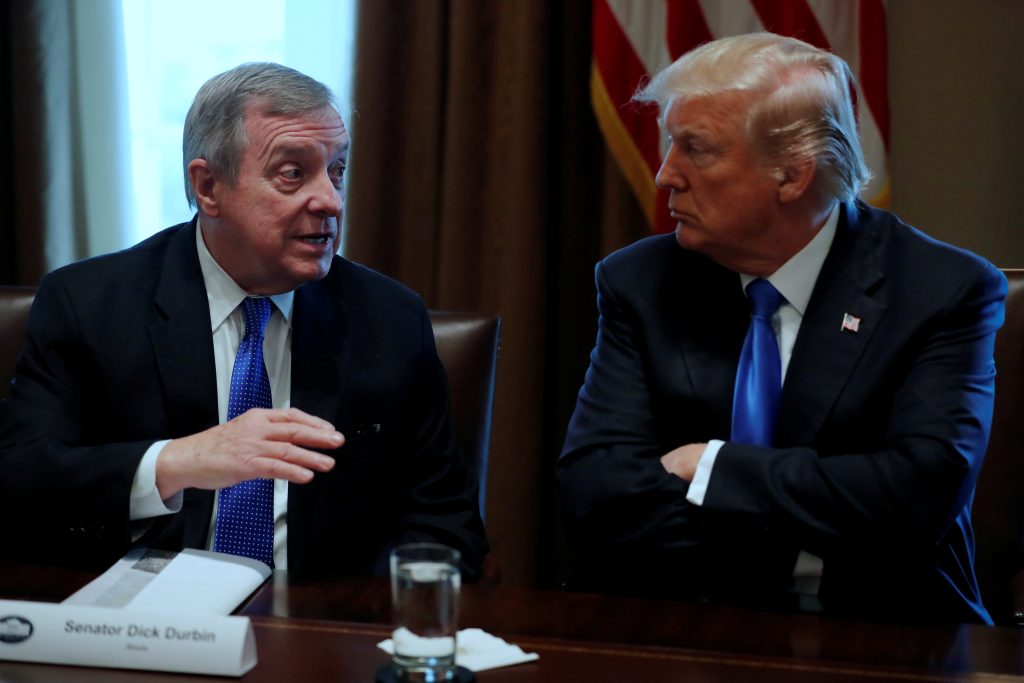 President Donald Trump said Sunday that a program that protects immigrants who were brought to the U.S. illegally as children is “probably dead,” casting a cloud over already tenuous negotiations just days before a deadline on a government funding deal that Democrats have tied to immigration.

At issue is the Deferred Action for Childhood Arrivals program created by President Barack Obama to shield hundreds of thousands of these individuals, known as “Dreamers,” from deportation. Mr. Trump, who has taken a hard stance against illegal immigration, announced last year that he will end the program unless Congress comes up with a solution by March.

“DACA is probably dead because the Democrats don’t really want it, they just want to talk and take desperately needed money away from our Military,” the Republican president tweeted. “I, as President, want people coming into our Country who are going to help us become strong and great again, people coming in through a system based on MERIT. No more Lotteries! #AMERICA FIRST.”

Republicans and Democrats were already at odds over funding the government, and the negotiations became more complicated after Democrats — whose votes are needed to pass a government funding bill — insisted immigration be included. Government funding expires midnight Friday without a deal in place, and some government functions will begin to go dark.

Further roiling the talks are comments by Mr. Trump during an Oval Office meeting in which he questioned the need to admit more Haitians and Africans, using a vulgar term to describe those countries, according to people briefed on the conversation but not authorized to describe it publicly. He also said in the Thursday meeting he would prefer immigrants from countries like Norway instead. The White House has not denied that Mr. Trump said the vulgar word, though Trump did push back on some depictions of the meeting.

A confidant of Mr. Trump’s told The Associated Press that the president spent Thursday evening calling friends and outside advisers to judge their reaction on his inflammatory remarks. Mr. Trump wasn’t apologetic and denied he was racist, instead blaming the media for distorting his meaning, said the confidant, who wasn’t authorized to disclose a private conversation and spoke on condition of anonymity.

The president also rejected as insufficient an immigration deal drafted by the bipartisan group of lawmakers who attended that meeting. The deal had included a pathway to citizenship for the “Dreamers” that would take up to 12 years, as well as $1.6 billion for border security, including Mr. Trump’s promised wall along the U.S.-Mexico border. Mr. Trump’s staunchest supporters consider any route to citizenship for the “Dreamers” amnesty for lawbreakers.

The president has said any deal must include funding for the wall as well as changes to make the immigration system a more merit-based structure.

The debate over DACA’s fate came as lawmakers faced questioning about whether Mr. Trump is racist.

Rep. Mia Love, R-Utah, the first black female Republican in Congress and the daughter of Haitian immigrants, denounced Mr. Trump’s comments as racist and called on him to apologize. “I think that would show real leadership,” she said on CNN on Sunday.

Sen. David Perdue, R-Ga., who was at Thursday’s Oval Office meeting, insisted Sunday that Mr. Trump did not say the vulgar word in referring to African countries.

“I am telling you that he did not use that word. And I’m telling you it’s a gross misrepresentation,” Perdue said on ABC. He said Sen. Dick Durbin, D-Ill., and Sen. Lindsey Graham, R-S.C., were mistaken in indicating earlier that that was the case.

Perdue and Sen. Tom Cotton, R-Ark., had issued a joint statement Friday saying they “do not recall the President saying those comments specifically.” Cotton said Sunday on CBS that he “didn’t hear” the vulgar word used.

Nielsen did dispute, however, Mr. Trump’s assertion that DACA was “probably dead.”

“I do not believe DACA is dead,” Nielsen said on Fox News. She said that the bipartisan proposal rejected by Mr. Trump did not address core security issues facing her department and that Mr. Trump’s administration was not interested in “half measures.”

Perdue said that “the potential is there” for a deal to protect the “Dreamers” but that Democrats needed to get serious.

Sen. Michael Bennet, D-Colo., defended the agreement as a “principled compromise” on NBC’s “Meet the Press” and said, “I hope people will explore it.”