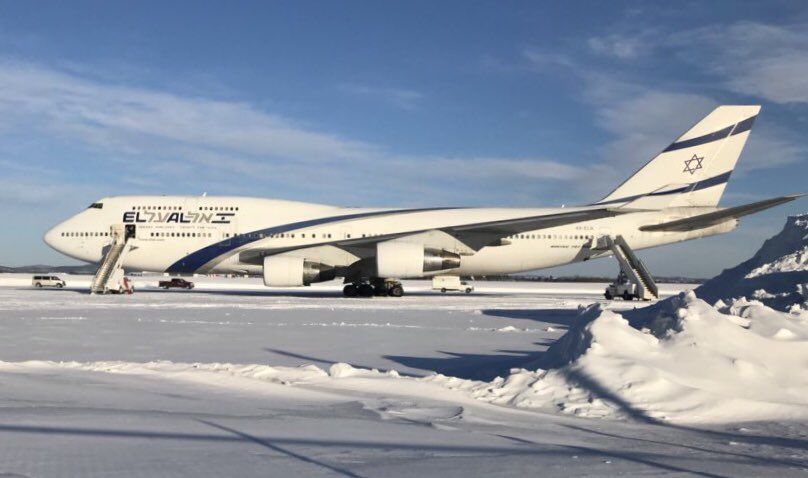 The flight, which had been scheduled to depart JFK at 11:50 p.m. Motzoei Shabbos, took off at 1:00 a.m., according to Fradel Leser, a passenger who spoke with Hamodia from the plane.

Two hours into the flight, the pilot announced that that there would be an emergency landing due to “technical difficulties”; some passengers told Hamodia that they had heard “irregular mechanical noises.”

Upon hearing the announcement, “nobody spoke much; we all began davening,” said Mrs. Leser. “Some people said viduy.”

The initial announcement, made while the plane was over the ocean, said that the emergency landing would be made within 15 minutes; no details were given, and some passengers assumed they’d be landing in the ocean.

Ultimately, the emergency landing occurred around an hour after the announcement. At approximately 4:00 a.m. Eastern Time (5:00 a.m. Atlantic Time), the Boeing 747 with a full load of passengers landed “on a sheet of ice,” according to Mrs. Leser, at Canadian Forces Base Goose Bay, a military airport that also handles some civilian traffic but is not equipped to handle large, international passenger jets.

Goose Bay is in Newfoundland and Labrador, Canada’s most easterly province.

One passenger told Hamodia that the landing itself – which occurred as lights from numerous fire trucks flashed all across the airport – felt normal, though the plane stopped rather abruptly.

After the landing, the pilot announced that the issue had arisen due to a fire that occurred in the landing gear, and that mechanics would be arriving to repair the plane.

But several hours later, the passengers were informed that a new plane would be arriving from JFK instead, on which they would continue their journey to Israel.

No one was allowed to disembark; they were told that CFB Goose Bay was unequipped to process customs on such a large passenger jet, and that there may not even be enough room in local hotels for all the passengers anyway. The passengers waited on the warm plane; temperatures outside were well below zero degrees Farenheit.

The flight – whose passengers included a large number of chareidim – had minyanim for Shachris and Mincha, and kumzitses, with heartfelt singing of songs such as “Vl’Yerushalayim Ircha” and “Ain Od Milvado.” Then, many of the men began learning, and a shiur was given on the Daf HaYomi.

Shortly before 3:00 p.m. ET, a new plane arrived, and the passengers were told to gather their belongings and prepare to transfer planes across the icy tarmac, via two buses, 30 people per bus. The flight crew handed out blankets to passengers – many of whom had checked in their coats before boarding – as they prepared to exit the plane in the frigid evening, with temperatures 10 degrees below zero Farenheit, and a “real-feel” temperature of 32 degrees below zero, according to weather.com.

As he took the microphone to speak to his weary passengers, the pilot of the new plane remarked on their exemplary conduct. “I admire each one of you for your behavior in this emergency landing, as described by the last crew,” he said. “I salute you.”

The calm, polite and kindhearted conduct of the passengers was, literally, inspiring.

One irreligious man had stayed coldly silent to his chareidi neighbor throughout the initial flight. During the stopover, he slowly began thawing, as his neighbor shared his wi-fi device, food and whatever else he had, and engaged him in friendly conversation. The man then admitted that he had always disliked chareidim, but that his outlook was now completely changed. Right there, on the plane, he donned his neighbor’s tefillin, davened and made brachos.

Mrs. Leser says that there was no panic on the plane, even during the tense moments between the initial announcement and the emergency landing.

“We are in the Eibishter’s hands; we are all davening, and we all feel secure,” she said.

“And there are lot of zechusim on this plane. There are a number of people who are flying to the Yarchei Kallah. In the cargo section, there is a nifteres [the second wife of, ybl”c, Rabbi Berel Wein] being flown to Eretz Yisrael for kevurah.”

“Everyone is calm, including the babies,” passenger Bruchy Schon told Hamodia. “Someone asked me how my baby is doing, and I replied that the baby has no idea what’s going on; all he knows is that he is in his mother’s hands, so he is safe. We too, are in our Father’s hands. Hashem is taking care of us; we are calm and know we will be safe.”