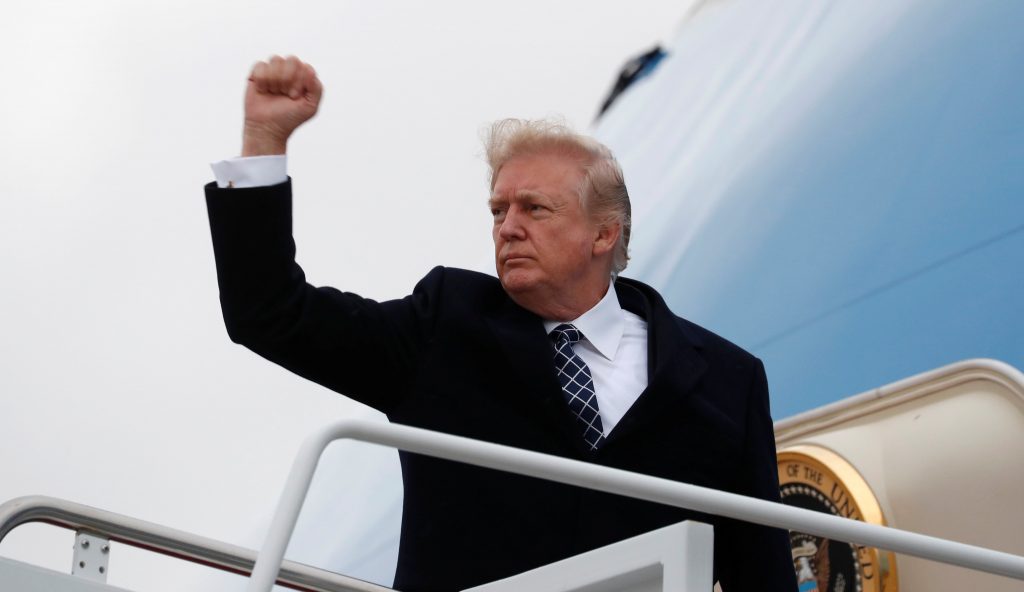 President Donald Trump’s White House physician declared him in “excellent health” after the president received his first medical checkup at Walter Reed military hospital on Friday, undergoing a physical examination amid suggestions in a recent book and by his detractors that he’s mentally unfit.

Dr. Ronny Jackson, in a statement released by the White House, said the examination “went exceptionally well. The President is in excellent health and I look forward to briefing some of the details on Tuesday.” Trump spent about three hours at the medical facility in Bethesda, Maryland, outside Washington, for the Friday afternoon checkup, his first as president, before departing for Florida for the weekend.

The fairly routine exam for previous presidents has taken on outsized importance in the age of Trump, given the tone of some of his tweets, comments attributed to some of his close advisers and Trump’s recent slurring of words on national TV.

Some of the comments were published in a new book about Trump’s first year by Michael Wolff which White House press secretary Sarah Huckabee Sanders has denounced as “complete fantasy” for portraying her 71-year-old boss as undisciplined and in over his head as president.

Trump himself has pushed back hard against any suggestion that he’s mentally unfit, declaring himself “a very stable genius.” He told reporters on Thursday that he expected the exam “to go very well. I’ll be very surprised if it doesn’t.”

The examination lasted several hours and measured things like Trump’s blood pressure, cholesterol, blood sugar, heart rate and weight. The White House did not provide specific results of those tests. Jackson, who also provided care for President Barack Obama and became a White House physician in 2006, is expected to provide a detailed readout of the exam on Tuesday and answer questions from reporters.

But conclusions about Trump’s mental acuity were not expected. The White House said Trump would not undergo a psychiatric exam. Officials did not address a different type of screening: assessments of cognitive status that examine neurologic functions including memory. Cognitive assessments aren’t routine in standard physicals, though they recently became covered in Medicare’s annual wellness visits for seniors.

While the exams are not mandatory, modern presidents typically undergo them regularly and release a doctor’s report declaring they are “fit for duty.”

Two months before the November 2016 election, Trump released a five-paragraph letter from his longtime physician, Dr. Harold Bornstein, who concluded that Trump “is in excellent physical health.” A year earlier, Bornstein said in a December 2015 letter: “If elected, Mr. Trump, I can state unequivocally, will be the healthiest individual ever elected to the presidency.”

The 2016 letter put Trump’s blood pressure and cholesterol measurements in the healthy range, though he uses a cholesterol-lowering statin medication. His EKG, chest X-ray, echocardiogram and blood sugar were normal.

The 6-foot-3 Trump weighed 236 pounds, and his body mass index, or BMI, of 29.5 put him in the category of being overweight for his height.

Trump takes Crestor for his cholesterol, a low-dose aspirin for heart attack prevention, Propecia to treat male-pattern baldness and antibiotics for rosacea. The doctor’s 2016 letter stated that Trump’s testosterone level, 441.6, was in the normal range, as were his PSA reading for prostate abnormalities and tests of his liver and thyroid.

Trump was 70 when he took office on Jan. 20, 2017, making him the oldest person ever elected to the nation’s highest office.

How much of Trump’s health information is released to the public is up to the president, but Sanders said she expects the White House to release the same kind of details past presidents have made public.

Obama’s three medical reports included sections on vital statistics; physical exam by system, such as eyes, pulmonary and gastrointestinal; lab results; his past medical and surgical history; his social history; and medications, among others.

Trump has said he gets most of his exercise playing golf. The American Heart Association has said the best types of exercise increase the heart rate and make a person breathe heavily, but that activities like golf don’t provide as much cardiovascular benefit since they don’t require much extra effort. The association suggests players walk the golf course instead of renting a golf cart. Trump drives a cart from hole to hole.

Obama played basketball, lifted weights, worked out on an elliptical machine or treadmill and played golf. George W. Bush traded running for mountain biking to preserve his knees. Bill Clinton was a runner who installed a jogging track at the White House. He also played golf.