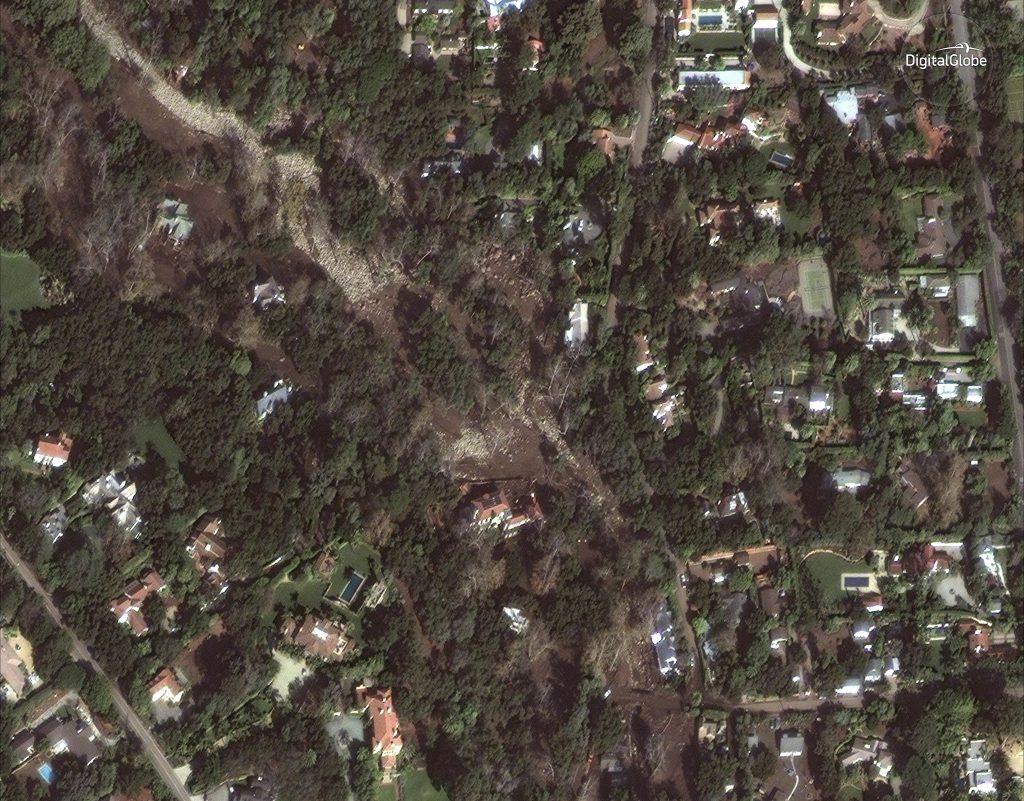 Crews dug away at masses of mud, boulders and debris with earth-moving machines and shovels Saturday in a California town ravaged by mudslides, hoping to find seven people still missing in a disaster that has already claimed at least 18 lives.

The army of searchers and recovery workers in Montecito swelled to more than 2,000 five days after a powerful storm swept in from the Pacific and dumped a deluge on mountain slopes above the coastal enclave that were burned bare by a huge wildfire in December.

The backbreaking work went on under the sunny skies that have made the stretch of Santa Barbara County coast about 90 miles northwest of Los Angeles a haven for the wealthy and tourists drawn to its scenery and casual vibe.

“We have to do whatever it takes,” said Capt. Tom Henzgen, leader of a team from the Los Angeles Fire Department.

Long-range forecasts gave the crews about a week before the next chance of rain — and potential new mudslides — although the precipitation expected next Friday was expected to be disorganized and light. Another system was possible two days later.

Much of the community of about 9,000 remained under mandatory evacuation orders, even unscathed areas, as crews both removed debris and worked to restore water, sanitation, power and gas. All warnings and orders for neighboring Summerland and Carpinteria were lifted.

The California Department of Transportation abandoned an estimate of reopening the highway on Monday and said it was not known when the closure would be lifted.

Amtrak, which began restoring rail service two days after the flood, was adding cars to trains because of heavy demand.

Emergency permits were obtained to dump up to 300,000 cubic yards of sediment into the surf line on beaches in Goleta and Carpinteria.

The department said the sediment would only consist of wet or dry dirt or mud without rocks, debris or vegetation, and inspectors would refuse any truckload containing unpermitted materials. Occasional rocks would be set aside by hand for disposal.

Santa Barbara County said emergency permits don’t require testing of the material for hazards but that public health authorities were testing the ocean waters. Down the coast in Ventura County, environmental health officials warned that storm runoff can carry disease-causing bacteria and warned the public to avoid contact with ocean water until sampling results can be reviewed next week.

In the disaster impact zone, searchers used chainsaws and rakes to remove logs and sift through the remnants of what was left of multimillion-dollar homes. Crews with backhoes and jackhammers pulverized enormous boulders that were left when the torrents stopped.

Orange markings left on doors indicated which homes had already been searched.

The so-called Thomas Fire, which led to the floods, was declared fully contained Friday. It erupted Dec. 4 in Ventura County and destroyed more than 1,000 structures as it swept through the city of Ventura and then threatened Carpinteria, Summerland and Santa Barbara. At 440 square miles, it became the largest wildfire in California records.