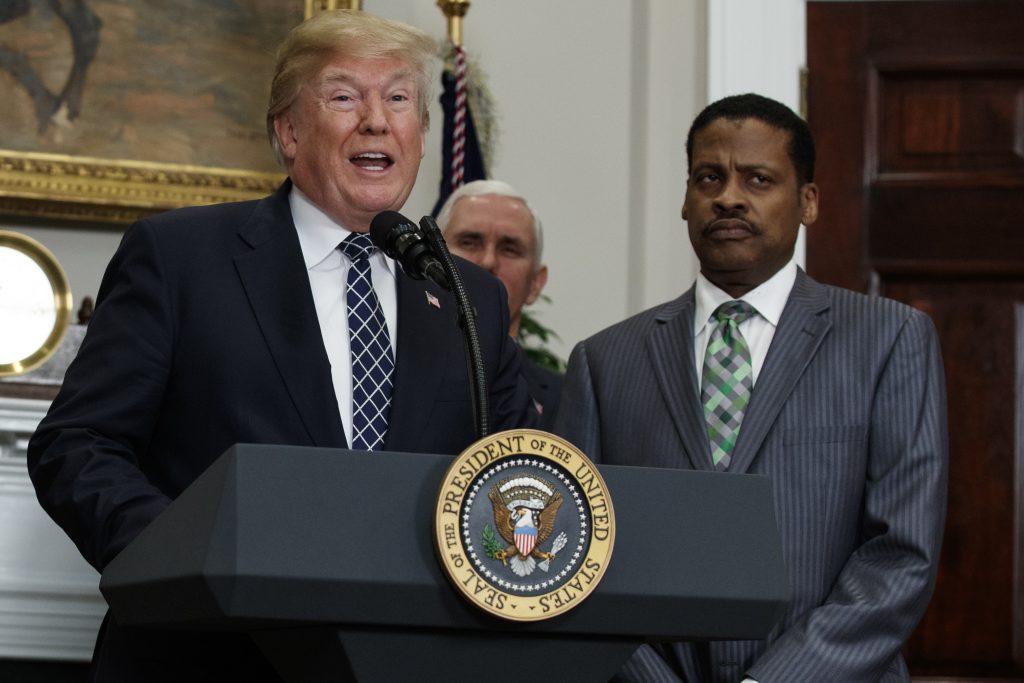 Politicians, diplomats and citizens from Haiti and African nations reacted with outrage Friday to reports that President Donald Trump used a vulgar remark to describe the countries during a briefing Thursday on draft immigration legislation.

“The Haitian government condemns in the strongest terms these abhorrent and obnoxious remarks which, if proven, reflect a totally erroneous and racist view of the Haitian community and its contribution to the United States,” it said.

Trump was in a closed meeting with members of Congress to discuss immigration on Thursday, including the issue of Delayed Action for Childhood Arrivals (DACA), when he reportedly questioned why the U.S. would accept more people from Haiti and Africa, rather than places like Norway. Trump is said to have used a vulgar term in describing Haiti and Africa.

At first the White House did not deny that the remark was made. But in a series of tweets Friday, Trump criticized the Democratic positions on immigration, and said that whereas he had used “tough” language during the meeting, he had not said the word he is accused of.

“The language used by me at the DACA meeting was tough, but this was not the language used. What was really tough was the outlandish proposal made – a big setback for DACA!”

“Sadly, Democrats want to stop paying our troops and government workers in order to give a sweetheart deal, not a fair deal, for DACA. Take care of our Military, and our Country, FIRST!”

“Never said anything derogatory about Haitians other than Haiti is, obviously, a very poor and troubled country. Never said “take them out.” Made up by Dems. I have a wonderful relationship with Haitians. Probably should record future meetings – unfortunately, no trust!”

Haitians at home and abroad were stunned, and internet message boards and radio stations were flooded with angry and anguished comments.

Motorcycle taxi driver Jean-Paul Maxon said he was angry that the president seemed to be unaware of Haiti’s proud history as the first independent country founded by freed slaves.

“Trump will not last in office,” Maxon said. “He attacked the wrong nation.”

The government statement also pointed to history, noting that Haitian soldiers fought on the American side against the British in the Revolutionary War and in the War of 1812.

“The relationship between the two countries has been strengthened by the fact that millions of sons and daughters of Haiti have contributed and will continue to contribute to the prosperity and greatness of America,” it said.

“Mr. Trump spits on the assassination of this black American icon, as well as on a whole generation of young people, black and white, who gave their lives in the civil-rights movement,” he said.

Former Prime Minister Laurant Lamothe said Trump showed “a lack of respect and ignorance” not previously shown by a U.S. president and “the world is witnessing a new low today.”

The criticism poured in from Africa, as well.

“We would not deign to make comments as derogatory as that about any country that has any kind of socio-economic or other difficulties,” Jessie Duarte, the deputy secretary general of South Africa’s ruling African National Congress, told reporters at a news conference in East London, South Africa. Duarte added that much like their African counterparts, millions of U.S. citizens were affected by problems such as unemployment.

It said in a statement that it had asked the U.S. government, through its ambassador, to “clarify” if the derogatory remark also applied to Botswana given that there were Botswana nationals living in the United States and others who wished to go there.

The African Union (AU), an organization that promotes cooperation on the continent, said it was alarmed by Trump’s “very racist” comments.

“Given the historical reality of how African Americans arrived in the United States as slaves, and the United States being the biggest example of how a nation has been built by migration – for a statement like that to come is particularly upsetting,” AU spokeswoman Ebba Kalondo said.

On the streets of Lusaka, capital of Zambia, Trump’s reported remark reinforced long-held views about the U.S. leader.

“Trump has always been a racist – only a racist can use such foul language,” said Nancy Mulenga, a student at the University of Zambia.

Retired Ethiopian long-distance runner Haile Gebrselasse, who won an Olympic gold medal in Atlanta in 1996, told Reuters that Trump’s comments did not reflect the views of all Americans.

A number of Norwegians rejected Trump’s suggestion that the U.S. should instead be accepting more people from places like Norway.

“On behalf of Norway: Thanks, but no thanks,” tweeted Torbjoern Saetre, a politician representing Norway’s Conservative Party in a municipality near Oslo.

One woman wrote on social media: “We are not coming. Cheers from Norway.”