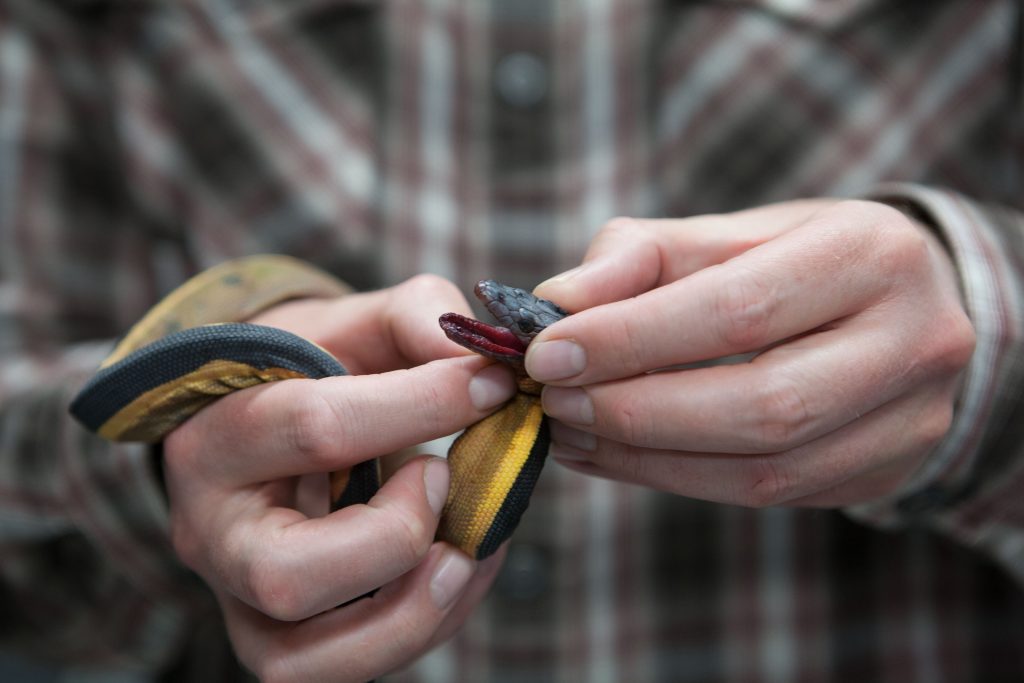 A rare venomous sea snake found slithering on the sand in Newport Beach earlier this week was one of a growing number of the serpents apparently drawn far north of their usual habitat by the spread of warm ocean temperatures, a biologist said Thursday.

The yellow-bellied sea snake discovered near the 18th Street lifeguard tower on Monday was the third report of the species in Southern California since 2015 — and the fifth since 1972, said Greg Pauly, herpetological curator at the Natural History Museum of Los Angeles County.

“Oceans are warming and the species that respond to that change will be those that are the most mobile,” Pauly said. “So the big question now is this: Are sea snakes swimming off the coast of Southern California the new normal?”

But Pauly said “these are pretty mellow animals” and they are unlikely to bite a person unless they are picked up.

The 25-inch female sea snake was found by a person walking along the surf at Newport Beach. Later, a lifeguard took the animal to the Pacific Marine Mammal Center in Laguna Beach, where it was euthanized.

“When one of these marine serpents washes up on a beach,” Pauly said, “it means it is sick and doesn’t have enough energy to swim out beyond the shore break.”

The yellow-bellied sea snake is the most wide-ranging in the world, inhabiting the coasts of Africa, Asia, Australia, Central America and Mexico, including the Baja California Peninsula.

The species, Pelamis platura, was first seen in Southern California in San Clemente in 1972. All subsequent local sightings, with the exception of the one reported Monday, occurred during El Niño years, which are marked by higher sea surface temperatures, Pauly said.

Biologists suspect the wandering sea snakes were pursuing food sources including small fish and eels in warmer water that extends farther north than it has in the past.

“A few more of these sea snake sightings in Southern California,” Pauly said, “and we’ll have a pattern telling us that something remarkable is happening in our ocean and the species it supports.”