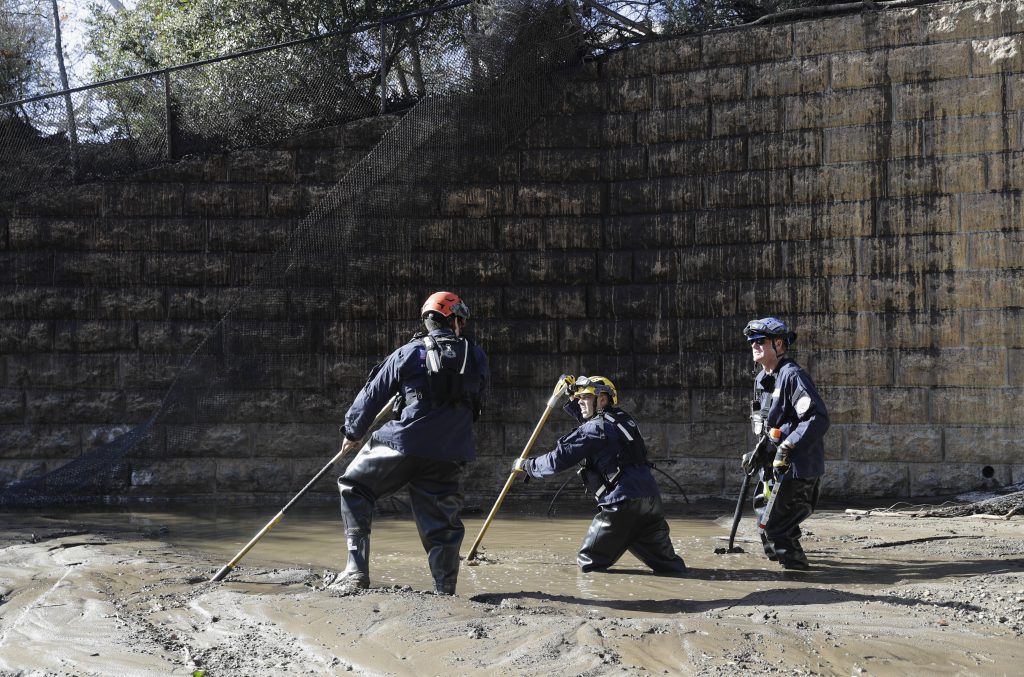 More than two full days after mudslides ravaged this coastal town, the search for the missing became an increasingly desperate exercise Thursday, with growing doubts about whether anyone would be found alive. Seventeen people were confirmed dead and eight others were unaccounted for.

“They’re not going to find survivors anymore. They’re going to find bodies in the mud,” said David Weinert, who feared two of his neighbors were among the dead and turned out to be right in at least one case. “It’s emotional for me to say this, but I think they’re gone.”

The air smelled of sewage and ash as more than a dozen firefighters climbed through rubble in the backyard of a mansion that had been ripped in half. Some rescuers used poles to probe the muck for bodies, while others waded chest-deep in the mire. Two search dogs swam around, trying to pick up any scent.

“At this moment we are still looking for live victims,” said Santa Barbara fire Capt. Gary Pitney. But he confessed: “The likelihood is increasing that we’ll be finding bodies, not survivors. You have to start accepting the reality of that.”

He noted that one survivor pulled from the muck earlier in the week was suffering from hypothermia after just an hour.

Crews marked places where bodies were found, often far away from a home, and used that information to guess where other victims might have ended up as the surging mud carried or buried them.

The disaster, touched off by heavy rain, took many homeowners by surprise early Tuesday, despite evacuation orders and warnings issued days in advance that mudslides were possible because recent wildfires in the hills had stripped away vegetation that normally holds soil in place.

As the rainwater made its way downhill with gathering force, it pried boulders from the ground and picked up trees and other debris that flattened homes and cars.

The disaster was already unfolding when Santa Barbara County officials sent out their first cellphone alert, at 3:50 a.m. County emergency manager Jeff Gater said officials decided not to send one sooner out of concern it might not be taken seriously.

County authorities sent a shudder through the community early Thursday when they reported that the number of people unaccounted for had surged from 16 to 48. But within an hour they said they had made a clerical error, and the actual number of missing was eight.