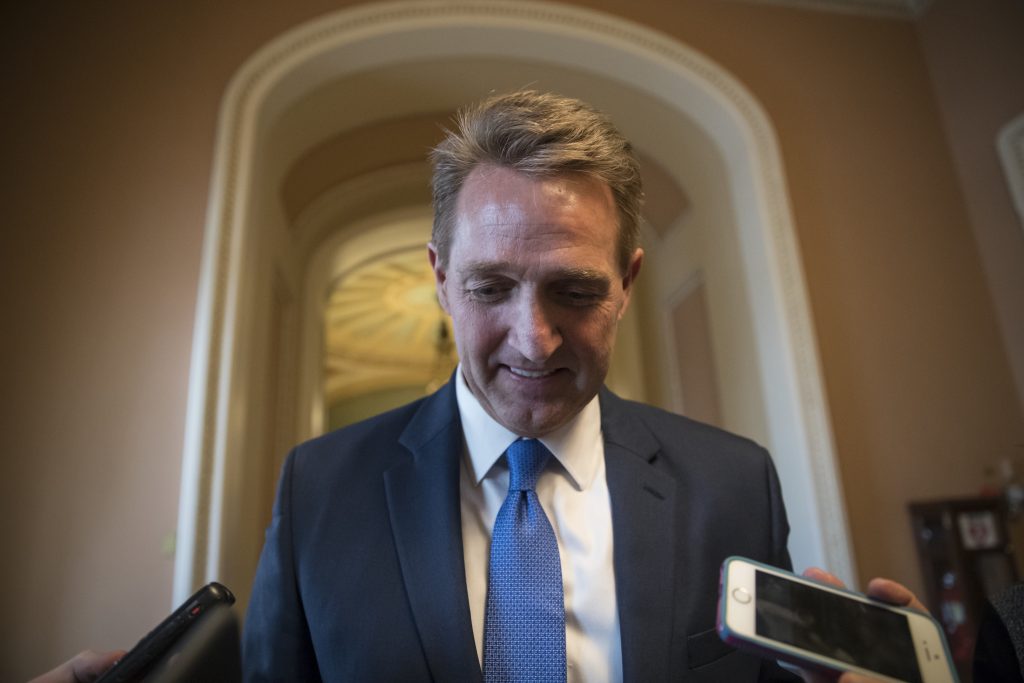 A bipartisan group of senators working to resolve the status of young undocumented immigrants, border security and restrictions on legal migration programs has offered an opening bid on an immigration agreement and is seeking sign-off from the White House, according to aides familiar with the talks.

Aides to Sen. Jeff Flake, R-Ariz., a longtime GOP broker on immigration policy, said Thursday that a deal has been reached; and other congressional aides familiar with the negotiations confirmed that the group is now consulting with the White House.

The breakthrough comes two days after President Donald Trump summoned lawmakers to the White House and said he would support a deal that would resolve the legal status of “dreamers,” or young immigrants brought to the country illegally as children, and make other changes in immigration and border security policy. Word of a deal also comes just days before a spending deadline that most Democrats are using as leverage for an immigration agreement.

Government funding expires on Jan. 19, and Democrats say they will support legislation to keep the government operating only if the legislation includes plans to protect “dreamers,” who were brought illegally to the country as children. But the talks have deadlocked for weeks amid Republican demands that any changes in the young immigrants’ legal status be coupled with changes in border security and some legal immigration programs.

A bipartisan group of senators, led by Dick Durbin, D-Ill., Lindsey Graham, R-S.C., and Flake, said earlier Thursday that they were nearing a deal resembling the framework Trump laid out for Democrats and Republicans: legal protections for dreamers; changes in security along the U.S.–Mexico border; restrictions on family migration policy, which some conservatives deride as “chain migration;” and changes to a diversity lottery system that grants visas to 55,000 people from countries with low immigration each year.

But Sen. Thom Tillis, R-N.C., who once actively participated in the bipartisan group’s talks, said he doubted whether they could strike a deal that passes the closely divided Senate and the GOP-dominated House.

“That group has members that for 16 years have tried to get a congressional outcome, and it’s not just about 60 votes. It’s 50 percent plus one in the House,” Tillis said.

Durbin, Flake and Graham have been part of ultimately unsuccessful bipartisan immigration talks that date back to at least 2006.

In a joint news conference Wednesday at the White House with Norwegian Prime Minister Erna Solberg, Trump was asked if he would support a DACA bill that did not include money for the border wall he has proposed.

Complicating the talks, Republicans on Wednesday released a flurry of new legislation designed to placate concerns of conservatives wary of a potential bipartisan deal — and to address the fate of hundreds of thousands of other people living in the country under temporary legal protection.

House Judiciary Committee Chairman Bob Goodlatte, R-Va., House Homeland Security Committee Chairman Michael McCaul, R-Texas and Reps. Raúl Labrador, R-Idaho, and Martha McSally, R-Ariz., on Wednesday unveiled a conservative plan that would grant dreamers an opportunity to apply for a legal residency that would be renewed every three years. Democrats and some Republicans reject such a plan.

The bill also would authorize construction of border walls and fencing; allow federal immigration and security agencies to hire at least 10,000 new agents; end the diversity lottery program; end the ability of new U.S. citizens to legally move family members into the United States; withhold federal funding from cities that refuse to help federal agencies enforce immigration laws; and intensify use of the E-Verify system to check an employee’s immigration status.

Goodlatte said the legislation “is aligned with the White House’s immigration priorities” and would “ensure that the door remains open to law-abiding immigrants, and restore the rule of law.”

The proposals have been previously rejected by other Republicans, who say that such a comprehensive proposal could not pass the badly fractured Congress and that the bill’s border security measures are too aggressive. Privately, aides to GOP leaders say the bill would not be able to pass in the House.

Meanwhile, Rep. Mike Coffman, R-Colo., whose Denver-area district is being closely targeted by Democrats this year, introduced a bill to grant permanent legal residency to hundreds of thousands of people from El Salvador, Haiti, Nicaragua and other countries granted residency through the Temporary Protection Status program.

The Trump administration has made plans to end the program in the coming years, emphasizing that the program was meant to provide only temporary legal status and calling on Congress to come up with a permanent solution.

The ongoing fight was sparked by Trump’s decision to end the Obama-era Deferred Action for Childhood Arrivals program, which the president and his supporters called an egregious example of executive overreach. But Trump’s attempts to end the program were upended late Tuesday, when U.S. District Judge William Alsup in San Francisco said the nearly 690,000 DACA recipients must retain their work permits and protection from deportation while a lawsuit challenging the decision to end the program moves forward.

The White House called the injunction “outrageous,” and the Justice Department has said it will appeal.

The fate of dreamers is “hanging out there with great uncertainty,” Durbin told reporters. “Whether it’s by the president’s announcement or a court decision, it’s time for us to meet the president’s challenge and to create a law that solves this problem.”

But any bipartisan agreement could be derailed by lawmakers who oppose any concessions on immigration rights or security issues.

“This particular issue is one that can divide members in the House and Senate from the president if he embraces a deal that is considered too lenient on the immigration issue,” warned Rep. Mark Meadows, R-N.C., chairman of the conservative House Freedom Caucus.

Rep. Filemon Vela, D-Texas, a strident critic of Trump’s calls for a border wall, said many lawmakers are frustrated by the scope of the negotiations. “There’s so many moving parts on this, it’s even hard to tell who’s really doing the negotiating,” he said. “It’s a mess.”

Immigration lawyers also differed on whether dreamers should renew their status now. Some suggested that immigrants file an application to get their foot in the door while the judge’s ruling is pending. But others said they risked losing the hefty application fee and worried that some immigrants would fall prey to fraud.

“It’s urgent that we have a permanent solution with a pathway to citizenship,” said Ivonne Orozco, 26, New Mexico’s teacher of the year, who has lived in the United States since she was 12 years old, brought from Mexico by her parents. She teaches Spanish at a public school in Albuquerque and is also finishing a master’s degree at the University of New Mexico with straight A’s. Her DACA status expires in 2019.