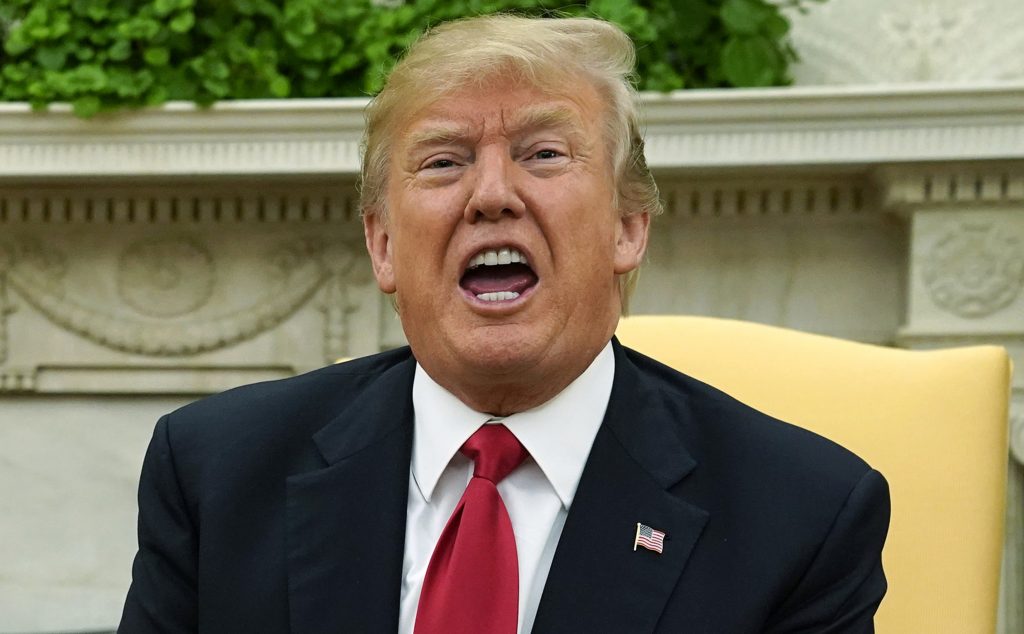 President Donald Trump threw his weight behind the Olympics-inspired diplomatic opening with North Korea, telling South Korea’s leader Wednesday that the U.S. was open to talks with Kim Jong Un’s government under the right circumstances.

A White House statement said Trump and South Korea’s President Moon Jae-in still underscored the importance of continuing the “maximum pressure” campaign against North Korea over its development of nuclear weapons — the U.S.-led barrage of international sanctions that is starting to bite the North’s meager economy.

But South Korea’s presidential office also said Trump told Moon to let North Korea understand that there will be no military action of any kind while the two Koreas continue to hold dialogue, the Yonhap news agency reported. On Tuesday, the two Koreas held their first talks in two years and agreed on the North’s participation in the Winter Olympics being held the South next month.

The prospects of resolving decades-old tensions on the divided Korean Peninsula remain deeply uncertain. North Korea has shown no willingness to discuss its nuclear weapons, which pose an emerging threat to the American mainland; and it has stuck to its tough stance toward Washington while it tries to woo the South. The newspaper of the ruling party on Tuesday called Trump a “lunatic” and said the U.S. needs to accept that North Korea is now a nuclear power.

But the thaw between North and South, which have also restored a military hotline, provides a diplomatic opening after months of escalating tensions that have fueled fears of war.

“President Trump expressed his openness to holding talks between the United States and North Korea at the appropriate time, under the right circumstances,” the White House statement said.

Trump also told Moon that Vice President Mike Pence and his wife Karen Pence will lead the U.S. delegation to the Winter Olympics, scheduled for Feb. 9-25 in Pyeongchang. Pence will stop in Alaska to review intercontinental ballistic missile defense systems and in Japan, stressing the U.S. commitment to stability in the region.

Moon has been supportive of the Trump administration’s pressure campaign but has long advocated engagement with Pyongyang. He told reporters in Seoul Wednesday that he’s open to meeting with Kim to resolve the North Korean nuclear standoff, although he said the success of such a summit must be guaranteed before the meeting can be realized.

Trump has previously scoffed at the futility of talking with the North, but when the inter-Korean dialogue was proposed last week, he claimed credit for making it happen through the sanctions pressure. He declared in a tweet, “Talks are a good thing.” The White House said Moon had briefed Trump on the outcomes of the North-South talks on Tuesday, and “thanked President Trump for his influential leadership in making the talks possible.”

Yonhap cited Moon’s chief press secretary, Yoon Young-chan, as saying Trump dismissed a recent report that he may be considering military action against the North. The White House statement did not mention that, nor Trump’s assurance that military force would not happen while the two Koreas continue to talk.

The U.S. retains 28,500 troops in South Korea, a legacy of the 1950-53 Korean War that ended with an armistice rather than a peace treaty, leaving the adversaries in a state of war for the past six decades.

The prospect of military confrontation has been magnified in the past year as Trump and Kim have traded bellicose rhetoric and crude insults, as the North has conducted its sixth and most powerful nuclear detonation and three tests of intercontinental ballistic missiles that now put the U.S. mainland in North Korea’s range.

Resorting to force is widely viewed as very risky. A pre-emptive U.S. attack could provoke a devastating retaliation by North Korea against the South, whose capital Seoul lies with the range of North Korean artillery and rockets.