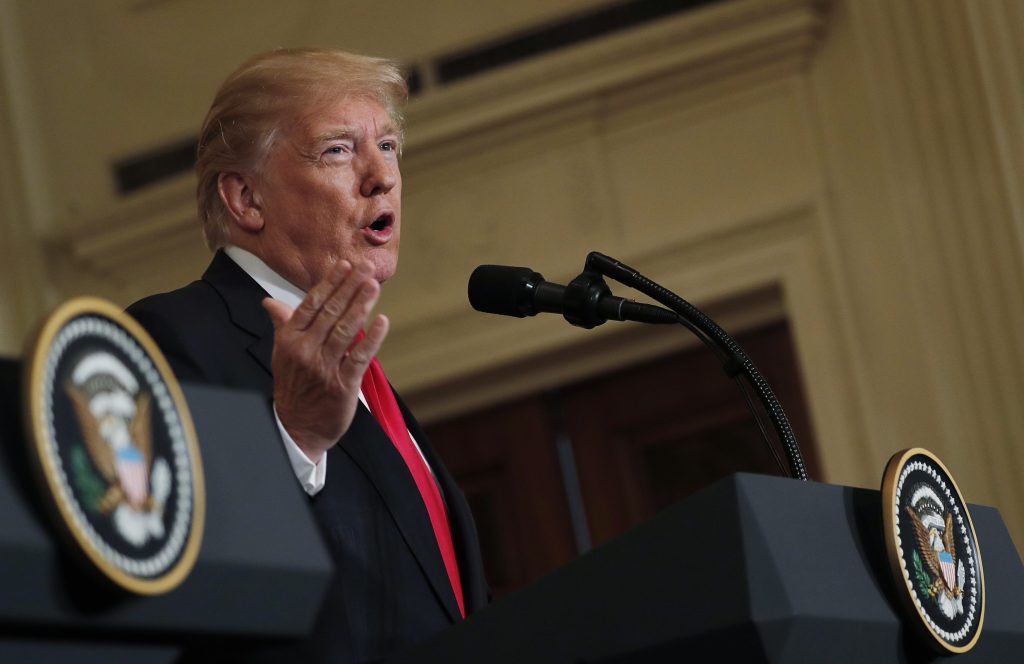 President Donald Trump is expected this week to extend relief from economic sanctions to Iran as part of the nuclear deal, citing progress in amending U.S. legislation that governs Washington’s participation in the landmark accord, according to U.S. officials and others familiar with the administration’s deliberations.

But Trump is likely to pair his decision to renew the concessions to Tehran with new, targeted sanctions on Iranian businesses and people, the six people briefed on the matter said. The restrictions could hit some firms and individuals whose sanctions were scrapped under the 2015 nuclear agreement, a decision that could test Tehran’s willingness to abide by its side of the bargain.

The individuals — two administration officials, two congressional aides and two outside experts who consult with the government — weren’t authorized to speak publicly on the matter and demanded anonymity. They cautioned that Trump could still reject the recommendation from Secretary of State Rex Tillerson, Defense Secretary James Mattis and national security adviser H.R. McMaster and that no final decision had been made. They said heated discussions were going on within the administration and with key Republican lawmakers.

The State Department and White House didn’t immediately respond to requests for comment.

Trump must decide by Friday to extend the nuclear-related sanctions relief for Iran’s central bank or re-impose the restrictions that President Barack Obama suspended two years ago.

The old, central bank sanctions largely cut Iran out of the international financial system, and are considered to be the most powerful of the penalties imposed by the U.S. during the Obama era, along with global penalties for buying Iranian oil. Some Iran hawks want to see both sets of restrictions return, but the six people with knowledge of Trump’s plans say the president isn’t planning to reinstate either at this point.

Such a balance could satisfy Trump’s demand to raise pressure on Iran, while not embarking on a frontal assault on the most central trade-offs of the nuclear agreement. While the U.S. and other world powers rolled back economic restrictions on Tehran, the Iranians severely curtailed their enrichment of uranium and other nuclear activity. Trump has complained that many of the Iranian restrictions expire next decade and has vacillated between talk of toughening the deal and pulling the U.S. out entirely.

A senior State Department official told reporters Wednesday that Tillerson and Mattis would be meeting with Trump on the matter before an announcement Friday.

The decision coincides with the administration’s efforts to secure a face-saving fix from Congress on the requirement for Trump to address Iran’s compliance every three months. In October, Trump decertified the nuclear deal under U.S. law, saying the sanctions relief was disproportionate to Iran’s nuclear concessions, and describing the arrangement as contrary to America’s national security interests.

Tillerson told The Associated Press in an interview last week that he and others were working with Congress on ways to amend the Iran Nuclear Agreement Review Act, or INARA, to resolve concerns Trump has with the deal. That will be coupled with diplomacy with European governments on addressing Iran’s missile testing and support for the Hezbollah terrorist movement, Shiite rebels in Yemen and Syrian President Bashar Assad.

“The president said he is either going to fix it or cancel it,” Tillerson said of the overall deal. “We are in the process of trying to deliver on the promise he made to fix it.”

On the INARA law, it’s unlikely Congress could move fast enough to codify changes by Friday. So Tillerson and others are hoping to convince the president there’s enough momentum to warrant another extension of sanctions relief and not jeopardizing the entire agreement. The goal would be for Congress to make the changes sometime before May, when Trump is next required to address the sanctions.

Trump has repeatedly dismissed the Iran deal, one of Obama’s signature foreign policy achievements, as the worst ever negotiated by the U.S. He has particularly bristled at having to give Iran a “thumbs up” every few months by acknowledging that it is meeting the requirements to invest in foreign banks, sell petroleum overseas, buy U.S. and European aircraft, and so forth.

One would automatically re-impose, or “snap back,” suspended sanctions if Iran commits certain actions, possibly including things unrelated to its nuclear program. Currently, Congress must act for the sanctions to snap back.

Another proposal would require snapback if Iran refuses a request from the International Atomic Energy Agency, the U.N.’s atomic watchdog, to inspect a military site not currently being monitored. Iran hawks worry the IAEA, fearing a confrontation with Iran, won’t even ask for such an inspection.

Other debates center on Iran’s missile testing. Hardline Republican Sens. Tom Cotton, Marco Rubio and Ted Cruz want sanctions back if Iran launches any ballistic missiles capable of targeting territory outside of Iran, such as Israel or Saudi Arabia, and not just an intercontinental missile.

Senate Democrats, generally more supportive of the nuclear deal, are pushing their own suggestions. One would let a simple House and Senate majority stop any effort to snap back sanctions, unless the president vetoes the block. While such a mechanism is unlikely to threaten Trump in the short term, some anti-deal Republicans fear it could be used against them under a future Democratic president.