Community ‘Just From the Standpoint of Common Sense’: An Interview With Larry D. Thompson
Community 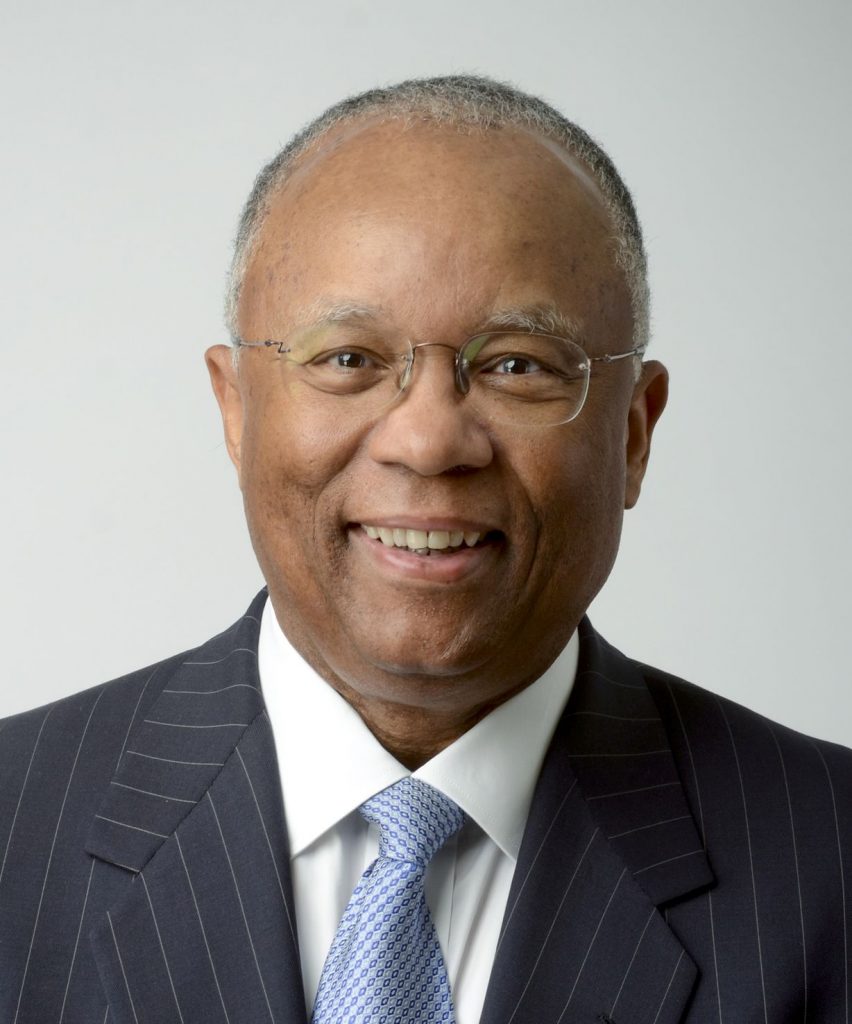 One of the unsung heroes working behind the scenes on behalf of Sholom Mordechai Rubashkin is Larry D. Thompson, a former U.S. deputy attorney general (2001–2003), the second-highest-ranking position in the U.S. Department of Justice, and former senior vice president for government affairs and general counsel for PepsiCo. He also served as U.S. attorney for the Northern District of Georgia, and is currently counsel with the law firm of Finch McCranie, LLP.

In this exclusive interview, Mr. Thompson shared with Hamodia what inspired him to give so much of his time and energy for this cause.

How did you first get involved in the Rubashkin case?

I was contacted by Rabbi Zvi Boyarski [of Aleph Institute, an organization that helps prisoners and their families]. I was still the general counsel of PepsiCo, and he actually came to my office and made a very compelling oral presentation for me to get involved, and then he left some materials that I read. I was just amazed and shocked by what had happened, and began to become interested in the matter.

Then, I don’t know exactly how this happened, but I met Gary Apfel, and really was impressed with his legal ability, his passion for the case, and sort of joined with him. [Laughs]

You are one of the most prominent legal scholars in contemporary America. You’re an African-American, born in Hannibal, Missouri, who later lived and worked in Georgia. Sholom Mordechai Rubashkin is a Chassidic Jew, born and raised in New York. What inspired you not only to want to help him, but to devote so much time and so much energy to it?

Well, it was very simple: When I read the case, I was shocked and really outraged at the sentence. And then, as I got into the case and learned more about the case, and the instances of prosecutorial misconduct, I became more concerned about the case.

And it has nothing to do with anyone’s background or religion; it’s just a matter of justice. I’m a lawyer, and I found in this case great injustice and — I know some of my Jewish friends are reluctant to call this out, but, I think — instances of unacceptable rank religious discrimination.

You feel that had he not been a religious Jew, or even Jewish, this would have been handled differently?

I certainly know that given the things I’ve seen in the case, because he was Jewish, that factor got involved in the case in a number of instances. And that’s unacceptable in our justice system, too.

You served as U.S. attorney for the Northern District of Georgia, and were also a deputy attorney general. As a former prosecutor, what are your thoughts regarding the way the prosecutors acted in this matter?

What is surprising to me is that this is a case in which our system has just gone awry. Forget about the merits of what Mr. Rubashkin did; the sentence itself is outrageous. It defies common sense, it defies the notion of fairness, it defies any notion of justice for someone to receive a 27-year sentence — an individual who had never committed a crime, had never been involved in the criminal justice system. This is a non-violent, first-time offender; to receive a 27-year prison sentence is outrageous on its face.

As you mentioned earlier, you worked very closely with Gary Apfel, and I believe you were also in contact with the Rubashkin family. What has this process been like?

Gary and I are dear friends, and, quite frankly, we consider each other brothers! He is an outstanding lawyer; his dedication and passion in this case have been remarkable. I think all of us are very fortunate to have worked with Gary, but I think the Rubashkin family is very, very fortunate to have a lawyer like Gary dedicated to this case.

Especially as he did it pro bono as well.

You actually flew down a couple of years ago to Iowa to meet with the U.S. attorney there. What was that trip like, and what made you agree to fly down there? I know how tight your schedule was.

Throughout this case, one of the most disappointing things … was the lack of just considering the case in the context of common sense, and in the context of fairness and justice. And we continually were rebuked by the bureaucratic authorities, notwithstanding the fact that you had some real serious people supporting the efforts to have the Department of Justice (DOJ) take another look at the Rubashkin case. And it was bipartisan: You had senior former DOJ officials, FBI officials — not only including myself, but my former boss, John Ashcroft [U.S. attorney general during the Bush administration]; Jamie Gorelick, who is a prominent Democrat [deputy attorney general during the Clinton administration]; and none of this kind of support seemed to get the attention of the DOJ. And this factor was greatly disappointing to me.

I think it’s just a hesitation to overturn the status quo. And that’s unfortunate, because I do think all of our officials should be willing to take a fresh look at outcomes — no matter how perfect we think the system is, there are always imperfections. And I firmly believe that someone should have just looked at the case — [put aside] the facts and the evidence, but looked at the case just from the standpoint of common sense: Does it make sense to send a first-time offender for a non-violent offense to prison for 27 years?

And, by the way, if I may say, this case is a great example for the need for sentencing reform. Again, the factors that were used to get to this 27-year sentence had nothing to do with the way Mr. Rubashkin was operating his meat packing plant; it revolved around technical definitions of money laundering and how much money the bank lost. And when I first was introduced to this case by Rabbi Boyarsky, that was one of the things that puzzled me and attracted me to the case, because the sentencing calculation was not based upon the underlying offense, but on a technical definition of bank fraud. And that, of course, to use that formula for this case, based upon the facts involved in this case, I thought was very unfair to reach a 27-year sentence.

Especially since they never claimed that Mr. Rubashkin sought to defraud anyone. He certainly didn’t want his company to collapse, leading to the bank loss.

There was strong evidence that the prosecutors themselves were involved in the bank loss, because potential buyers who could have righted the business and made the business a viable one were discouraged from purchasing the business.

You reviewed all the pleadings in recent years — the § 2255 petition, the appeals of that denial, etc. What did you think about the legal case that was being made in the court system?

Well, I thought the instances of prosecutorial misconduct should have gotten the attention of the Department of Justice. They are clearly spelled out in the 2255 motion, which I think was a very good and viable motion. I think an example of what really bothered me in this case was at the bail-bond hearing for Mr. Rubashkin, when the U.S. attorney’s office prosecutors said that he represented a flight risk to Israel simply because he was an American Jew. That was ridiculous, and I think an example of discriminatory conduct that really is unacceptable. That’s like saying that a person of Irish heritage is a flight risk to go to Ireland.

I’ve had Jewish clients over the years, and I’ve never, never heard anyone make that argument before.

According to that reasoning, basically anyone except the Native Americans would be a flight risk — all of them came from somewhere!

Tell us about some of the efforts at commutation. I understand you were also involved with the letters that went to the president.

We did a lot of things in terms of assembling a list of prominent, bipartisan supporters. I am not as aware of some of the detailed things that happened with the new administration; I was involved in contacting officials of the prior administration. But I am so happy that President Trump saw fit to address this grave instance of injustice. I really am pleased that he was able to do that. And it’s a great Chanukah present for my client!

When did you know that the president was going to commute the sentence?

What was your reaction?

Oh, I was ecstatic. I called my wife, because she had been involved in the case in the sense of answering hundreds of phone calls over the years from Gary and other people involved in the matter. And then, when my wife and I were talking, Gary called me, and then he had Sholom’s daughter Roza on the line; I merged the telephone calls, and I talked to Roza and Gary. And then Sholom got on the line and we talked with Sholom. And we all cried together. Tears of joy!

Was this the first time you worked so closely with religious Jews?

Well I got to know Gary, I got to know some of the traditions, I went to Gary’s son’s wedding. I’d been to numerous weddings of Jewish friends but I’d never been to one like this one.

It was a lot of fun! I have to get in better shape if I go to another one, because the dancing was pretty vigorous and I got really tired!

But it was enjoyable.

It was a lot of fun, a great experience.

[Working on the case is] something I’ll never forget, it’s one of the highlights of my legal career, it’s something I’m very proud of in terms of my own personal satisfaction and gratification, and it’s certainly something that the Rubashkin family deserves.

That’s remarkable, coming from someone who was a deputy attorney general and general counsel of PepsiCo! I know I speak on behalf of the greater Jewish community when I express our gratitude to you, Mr. Thompson, for what you have done for this case.

Well, thank you so much. It’s really been a team effort. Gary was our quarterback. But again, as I said, it is something that is very gratifying and satisfying to me from a professional standpoint and a personal standpoint.

Thank you so much, Mr. Thompson. It’s a tremendous honor. And may G-d reward you with many long years of good, healthy life. May you enjoy your family, and may you continue to do wonderful things for people!

Thank you so much, I really appreciate it.