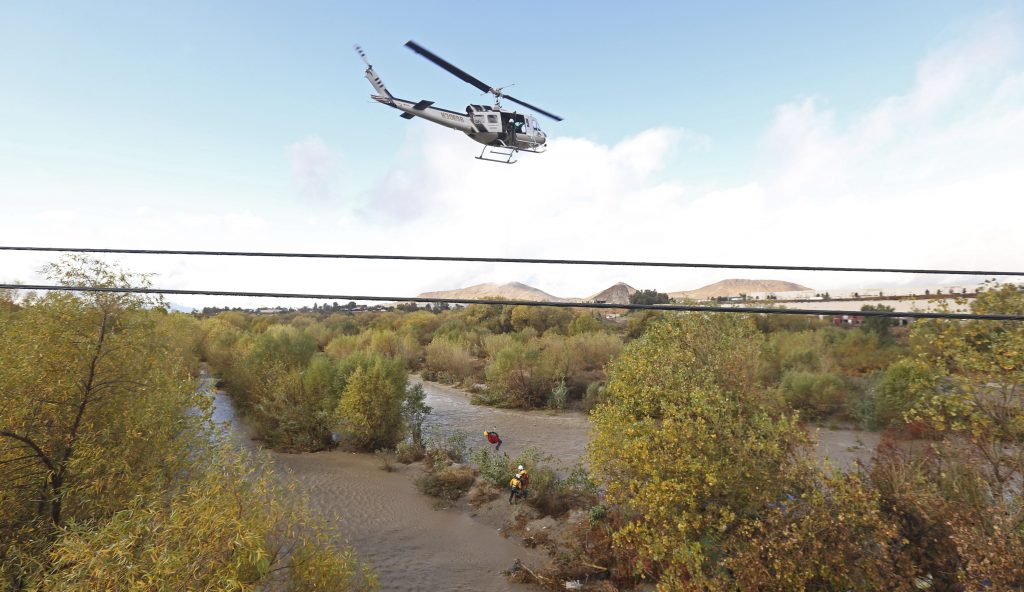 The death toll from the mudslides that struck Southern California climbed to 15 on Wednesday as rescue crews searched for anyone trapped, injured or dead in the onslaught that smashed homes and swept away cars.

The drenching rainstorm that triggered the disaster cleared out and was no longer a hindrance as searchers made their way across a landscape strewn with boulders and covered shoulder-high in places with mud the consistency of wet cement.

“Right now our assets are focused on determining if anyone is still alive in any of those structures that have been damaged,” Santa Barbara County Sheriff Bill Brown said.

He said that several dozen homes were destroyed or severely damaged, and that there are probably many more in similar condition in areas still inaccessible.

At least 25 people were injured, 50 or more had to be rescued by helicopters, and an undetermined number of others were missing, authorities said. Four of the injured were reported in severely critical condition.

The search was set to expand with the arrival of a major search-and-rescue team from nearby Los Angeles County and help from the Coast Guard and the National Guard.

Most of the deaths occurred in and around Montecito, a wealthy enclave of about 9,000 people northwest of Los Angeles.

A mud-caked 14-year-old girl was among the dozens rescued on the ground Tuesday. She was pulled from a collapsed Montecito home where she had been trapped for hours.

“I thought I was dead for a minute there,” the dazed girl could be heard saying on video posted by KNBC-TV before she was taken away on a stretcher.

The mud was unleashed in the dead of night by flash flooding in the steep Santa Ynez Mountains, where hillsides were stripped of vegetation last month by the biggest wildfire on record in California, a 440-square-mile blaze that destroyed 1,063 homes and other structures.

Burned-over zones are especially susceptible to destructive mudslides because scorched earth doesn’t absorb water well and the land is easily eroded when there are no shrubs.

The torrent arrived suddenly and with a thunderous sound.

Thomas Tighe said he stepped outside his Montecito home in the middle of the night and heard “a deep rumbling, an ominous sound I knew was … boulders moving as the mud was rising.”

Two cars were missing from his driveway, and he watched two others slowly move sideways down the middle of the street in a river of mud.

In daylight, Tighe was shocked to see a body pinned by muck against his neighbor’s home. He wasn’t sure who it was.

Authorities had been bracing for the possibility of catastrophic flooding because of heavy rain in the forecast for the first time in 10 months. Evacuations were ordered beneath recently burned areas of Santa Barbara, Ventura and Los Angeles counties.

But only an estimated 10 to 15 percent of people in a mandatory evacuation area of Santa Barbara County heeded the warning, authorities said.

U.S. Highway 101, the link connecting Ventura and Santa Barbara, looked like a muddy river and was expected to be closed for two days.

The worst of the rainfall occurred in a 15-minute span starting at 3:30 a.m. Tuesday. Montecito got more than a half-inch in five minutes, while Carpinteria received nearly an inch in 15 minutes.

“Power lines were down, high-voltage power lines,” said Peter Hartmann, a dentist who moonlights as a news photographer for the local website Noozhawk. “The large aluminum poles to hold those were snapped in half. Water was flowing out of water mains and sheared-off fire hydrants.”

“It was a freaky moment to see her just covered in mud,” he said.