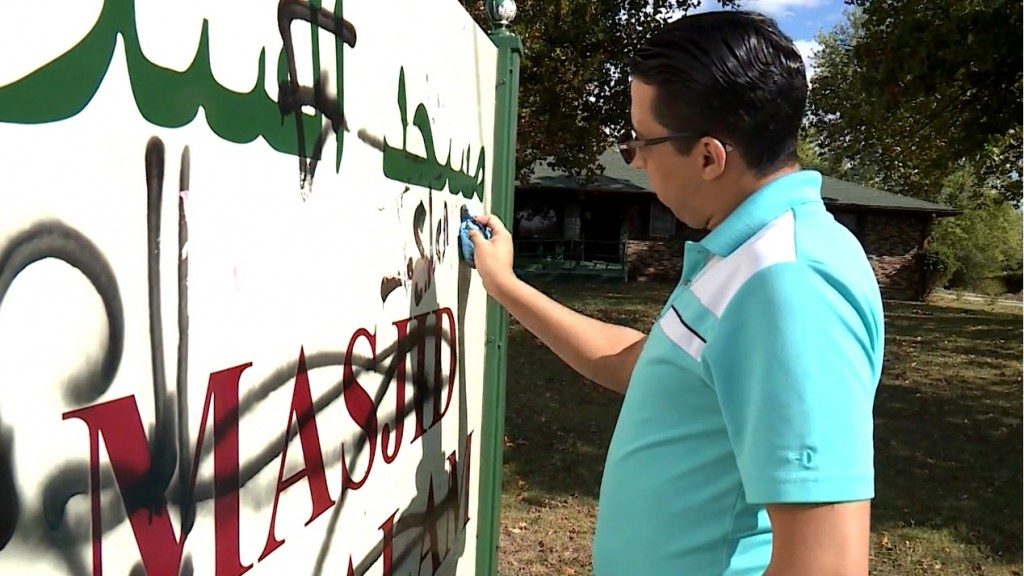 The vandalism of a Fort Smith, Arkansas mosque in 2016 by three young local men wouldn’t seem to have any Jewish connection. But it did. Or, better, it turns out that it does.

The vandalism, which consisted of spray-painted swastikas, obscenities and messages like “Go home” and “We don’t want you here” on the mosque’s doors, came after the two men spent most of the night drinking whiskey and, eventually, railing against the Islamic State. While IS is certainly most worthy for even sober citizens’ excoriation, what Craig Wigginton and Abraham Davis, along with another friend, Ezra Pedraza, did next — drive to the Al Salam mosque and deface it — was mindless. And a crime.

Mr. Davis said that, upon awaking the next day, he already regretted what he had done. His regret gnawed at him and then, four months later, the police, having analyzed security camera footage, arrested him.

Mr. Davis’s impoverished family could not make his bail, and so he was sent to jail. There, he expressed his regret by writing a note of apology to the mosque, which he sent to his mother to have delivered.

Mosque officials were surprised to receive the apology but fully accepted it and told the prosecutor they didn’t want to press charges. But it was out of their hands and the young men found themselves before a judge.

Despite the mosque’s best efforts, Mr. Davis ended up with a felony conviction, and with about $3,200 in fines.

He got a job and began making small court-ordered monthly payments. If he stopped them, he could end up in prison for six years. It was a constant fear.

A reporter for The New York Times went to Arkansas to interview the dramatis personae and, although a mosque official at first suspected her of being an FBI agent trying to spy on the mosque, he came to recognize the legitimacy of her professional claim.

When the reporter’s story was published this past summer (remember summer?), modest donations from readers came in, both to the mosque and to the felon, whose family had received an eviction notice. The gifts allowed the Davises to pay the security deposit and first month’s rent on a new place, and get some used furniture and a bed for their 5-year-old. Someone from Texas paid off their electric bill. Mr. Davis was able to buy a bicycle, so he could bike to work.

He continued to make the monthly payments on his fine and then, one day, he was informed that the balance of his fine had been paid. By the mosque’s social director, Hisham Yasin. Mr. Davis was shocked.

“There’s no words,” he told the reporter, covering his face with his hands.

Well, several weeks earlier, Mr. Yasin had called the reporter to say that the mosque had received a generous donation from the Jay Pritzker Foundation. No one at Al Salam had ever heard of it, and, ever suspicious, thought at first that it was a scam and that the “foundation” would ask for its bank account number to engage in identity theft.

A bit of research, though, yielded the fact that the group was legitimate, and that the late Mr. Pritzker, for whom the foundation is named, was a Chicago Jew with roots in a shtetl near Kiev who ended up owning the Hyatt hotel chain. The Pritzker family members are major philanthropists, and the donation the foundation made to the Al Salam mosque is what inspired it to, in turn, perform its own act of kindness to the man who had been part of the swastika-painting episode.

There are, I think, several lessons in this story. First, that kindness can count. There are hateful people, but also simple-minded misguided ones. And they can change.

Second, that, cognizant as we all are of a major strain of Islam that spawns evil people and evil acts, there is only good will to be gained by establishing appropriate bonds of friendship with receptive Muslims. Last year, tireless Masbia director Sender Rapaport rallied support within the frum community for fearful Muslim neighbors. Reb Sender did something right.

The third lesson is not from the story itself but how it was rendered in the many publications that covered it. Other than The Times, almost none of the other media reporting the mosque’s laudable deed cared to mention the fact that it had been motivated by the act of a Jewish charity.