Soda Wars Rage On in Philadelphia, Where Tax Is Blamed for Job Losses 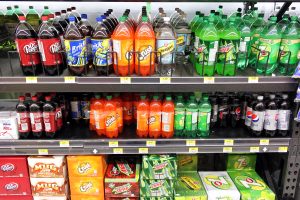 As cities nationwide debate taxes on sugary drinks, Philadelphia is emerging as the biggest test case.

A year after the city enacted the 1.5-cent-per-ounce levy, both sides remain locked in a battle over public perception. The stakes are high — Seattle started a similar measure this year, and other cities and municipalities are intrigued by the possibility.

The beverage industry cites a study showing that Philadelphia has lost jobs and grocery sales due to the tax, while city officials point to higher revenue for school funding and park projects. As the tug-of-war plays out, Jefferies analyst Kevin Grundy sees the industry entering 2018 with a stronger hand after some high-profile victories last year — including a surprising reversal in Chicago.

“It continues to be a risk for the industry,” Grundy said, referring to sweetened-beverage taxes. Nonetheless, “if we’re assessing that risk relative to 12 months ago, it probably feels a little bit less.”

In addition to Chicago’s decision to back out of a previously approved levy, Michigan lawmakers passed a bill in 2017 to ban future attempts to tax food and beverages at the local level. Santa Fe, New Mexico, and St. Helens, Oregon, voted against enacting soda taxes, showing that the American Beverage Association perspective has gained sway.

Philadelphia’s tax almost doubled the price of 12-packs of cans and two-liter bottles and gave momentum to the anti-soda movement, battering an industry that was already facing long-term sales declines amid increasing health concerns. After Philadelphia, San Francisco and Oakland, California, and Boulder, Colorado, did the same.

The American Beverage Association, a soft-drink industry trade group, carried out a study with Oxford Economics showing the city lost 1,192 jobs due to the tax and that bottlers’ sales fell 29 percent in the city. Non-beverage grocery-store sales, meanwhile, declined 9 percent, according to the study, and beverage sales increased outside the city limits, showing shoppers are taking lengths to avoid the tax.

This data could prove to be influential as new cities and counties look at their options, Grundy said.

“Broadly speaking, I think the consensus view would probably be, it’s well-intentioned public policy that’s had some unintended consequences,” he said.

Philadelphia has data supporting its side as well, however. It points to $72 million in new revenue that’s been used to send 2,700 children to preschool and provide new funding for 11 schools, according to spokesman Mike Dunn. The tax has also helped the city start a $500 million investment plan for parks, recreation centers and libraries, he said.

He also disputed the finding that business at city grocery stores declined, citing a study by researchers at the University of Pennsylvania and Harvard University. Meanwhile, higher tax collection on wages during the first six months of 2017 disproves the report’s assertion that the city lost jobs, he said.

“We’re very pleased with the first year of the tax,” Dunn said.

The city of brotherly love, which was the first major city to enact a tax on sweetened drinks, has already won a lawsuit aimed at killing the tax, and still faces two appeals. Pennsylvania’s top court hasn’t yet decided whether it will take up the case.

Philadelphians for a Fair Future, a group that supported the tax, received donations from former New York Mayor Michael Bloomberg, whose philanthropy supports anti-smoking campaigns and other health initiatives. Bloomberg also gave more than $18 million to campaigns in support of the Oakland and San Francisco soda-tax initiatives, finance records show. The former mayor is the founder and majority owner of Bloomberg LP, the parent company of Bloomberg News.

Now that actual data is starting to flow into the public realm, the initial experiences could prove key and so Philadelphia bears watching closely, according to Pablo Zuanic, an analyst at Susquehanna International Group.

“We aim to take no sides in this debate, but think, clearly, that Philadelphia should be a key area of focus for nonalcoholic beverage investors,” Zuanic wrote in a December research note.